"Well well well, Guybrush Threepwood. You do turn up in the strangest places." 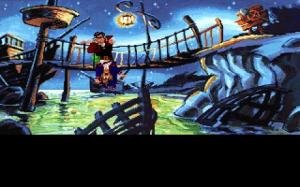 History is filled with examples of sequels that fail miserably to live up to the high standards set by their predecessor. Brilliant movies like Men in Black and Analyze This have their names diluted by pathetic cash-cow sequels, and the odds for success are only slightly better in computer gaming. A sequel, to be sure, is always a dangerous and delicate proposition.

But it's even tougher when that sequel is the follow-up to such a brilliant, bonafide classic like The Secret of Monkey Island. The humor and brilliance of that game left multitudes of fans anxiously awaiting the further adventures of Guybrush...and thankfully, they were not to be disappointed.

LucasArts was fully aware that the center of Monkey Island, the element that any future game must be built around, was the humor, and without exception the humor in MI2 succeeds, usually emphatically so. It is equally as funny as its predecessor, perhaps moreso. 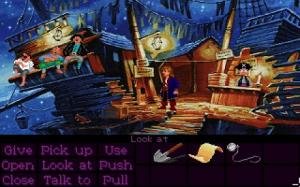 Monkey Island 2 also succeeds in an area many adventures have failed in: it is the perfect length. It is substantial, and I felt like I got my money's worth out of it; yet the pacing is excellent and the game never feels unnecessarily protracted. The puzzles are more difficult than the first entry, causing some frustration, but definitely adding to the challenge factor (and to be fair, very few of the puzzles ever sink to the level of absurdity).

Another definite strength of the game is its non-linearity throughout the middle section. Some gamers have not appreciated this, preferring strict Police Quest-style story progression, but for adventure fans who like their freedom, it's hard to find a better example of this than MI2. And of course, MI2 is notable for introducing the LucasArts iMuse music system, and revolutionizing the way music framed a computer game (to great success here, I might add). 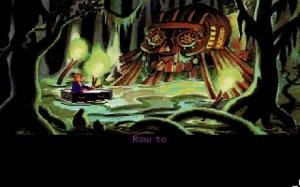 Unfortunately, the game ends with a resounding thud. The much-debated final sequence left the gamer in a state of shock and disbelief...and not a good kind at all, rather the worst kind of shock possible. The feeling that the entire experience of the game has been completely wasted.

The question to this day remains: what was Ron Gilbert thinking? What was his plan? How would he have led into MI3 from his ending? Wouldn't we think of it differently if we could see his vision? The answer, as far as I'm concerned, is no. When I finish a game, especially one as long as Monkey Island 2, I should never feel as empty and frustrated as I felt after the ending sequence was complete. And it's important to remember there was no guarantee of an MI3; rather, the ending led many to believe the series would not be continued. I have never veered from the statement I will make again now: the ending to this game is the single worst in the history of adventure games.

Yet I can not ignore how strong the first 99% of the game is. Therefore, here it is on the countdown, brilliant in every way except the payoff, which could more accurately be described as theft. This is probably one of the hardest games for me to rank, but I have reached the decision that ending aside, it is a bonafide classic, deserving of being known as the #18 adventure of all-time

Last time: I hated the ending just as much then as I do now; however, my response then was to leave it off entirely. The ending, for me, was equivalent to Pete Rose's gambling: an automatic ban, overriding all other achievements. You can attribute its position this year to temperance on my part, not any increased respect for the ending.

KEEP ME UP TO DATE ON Monkey Island 2: LeChuck’s Revenge Subscribe to our newsletter and we'll keep you up to date! 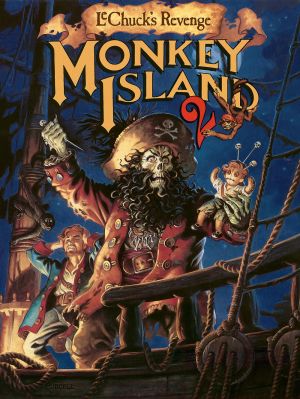