But more importantly, it's also time for another AG Christmas feature! After last year's 'Twas the Night Before Christmas, we asked what we could possibly do to top that effort. Although the answer to that was "pretty much anything", we were undaunted in our desire to make this year's project a show-stopper. We huddled together to ponder and brainstorm, and when we reached the notion of an AG caroling CD, we realized we needed to lay off the eggnog and get serious.

With that idea in mind, we gathered together a list of the biggest and best names in the adventure genre. And then we laughed ourselves silly, threw that out, and made a game ourselves. It may not be the flashiest game around, but what it lacks in polish and depth and eye candy and practically everything else that suggests "professional", it more than makes up with our sincere desire that you enjoy yourselves while playing. 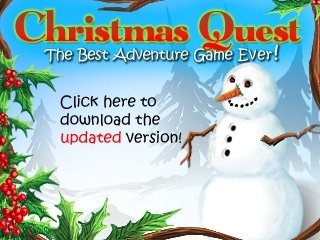 It's less than 7MB, so don't be shy. Even dial-uppers deserve to share in a Christmas Quest!

Merry Christmas from the entire staff at Adventure Gamers! If not Christmas, then Kwanzaa, Hanukkah, or the occasion of your choice to revel. It doesn't mean the same thing for all of us, but I think we all agree that any time is the right time for goodwill and cheer. So happy holidays and season's greetings to all our readers who helped make this another fantastic year.

The game originally released with a few... peculiarities, let's say. The cynical complained of lousy beta testing and only caring about getting our game out in time for the Christmas season. And while that accusation was absolutely, positively and unequivocally... well, true, you have to admit that a Christmas game after Christmas just doesn't have that same "je ne sais quoi". We knew you'd understand.

But being the service-oriented, customer-FIRST developers that we are, we listened to the criticism of our game's unique character quirks (ahem), and now we've made it even better! As hard as that is to imagine, yes. Not just little fixes, either. Colossal, earth-shattering, life-altering fixes.

So if you missed out originally, now's your chance to play Christmas Quest as it was REALLY meant to be played. And if you played it already, now you can play it again as if for the first time. (Or something.)

Get that modem humming, people. And enjoy the new improved Christmas Quest: The Best Adventure Game Ever! 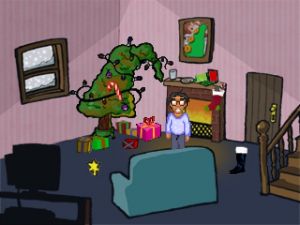