Review for NIBIRU: Age of Secrets

We get a small commission from any books sold.
All Bitmap Books
Written by
Laura MacDonald — September 17, 2005

Quick gaming question of the week: what is "Nibiru"? To the Mayans, it's a dark star whose appearance signals the end of the world. According to eccentric scholars, it is the twelfth planet orbiting our solar system, having eluded scientific detection all this time (though one has to wonder what happened to planet eleven, even if you grant them the debatable number ten). My personal favorite is courtesy of a new age web site, which claims that Nibiru is the 4th dimensional flagship of the Milky Way Galaxy's Galactic Federation. It is a planet, a battlestar, and a ship, all in one, and was the main peacekeeping force in the galaxy until 2000 BC. With such diverse and imaginative theories abounding, developers Unknown Identity saw in Nibiru a theme ripe for exploring. So how did they use this elusive planet, space cop, ultimate detroyer? They used it as a launching pad for a classic bit of adventure gaming, complete with aliens, artifacts, and ancient sects.

NIBIRU: Age of Secrets is actually not a new game at all, but an older game reborn. Originally released under the title Posel Bohu (or Messenger of the Gods) as a Czech-only game in 1998, the success of the developer's subsequent game, Black Mirror, caused them to revisit their earlier creation and revamp it for a worldwide audience, with story and gameplay adjustments and a complete graphic overhaul.

This adventure starts, as many classic gaming tales do, with an ancient mystery, a hero (of sorts), and the age-old dark conspirators determined to find the ultimate secret of wealth, power, and world domination. Throw in some Nazi mysticism, foul deeds, and flights to parts unknown, and you have a time-tested and enduring tale, with a few unique twists along the way. 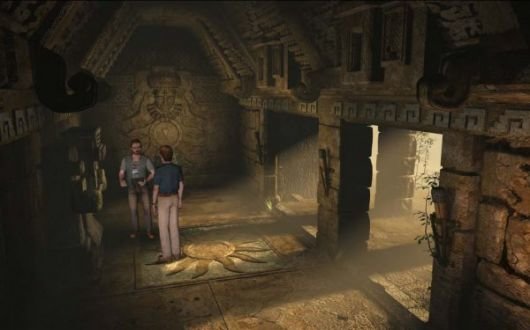 Martin Holan, our game's alter ego, is an archeologist reluctantly slogging through a pile of backlogged archives. But his true area of expertise is seeking mysterious relics and archeological finds in the wilds of the earth. Suddenly, he is rescued from his paperwork by an urgent call from his uncle, Professor Wilde, a noted though eccentric scholar. Martin learns there has been a fantastic discovery in the heart of Bohemia. Highway construction workers stumbled across an old tunnel and underground facility, built by the Nazis during World War II and used for mysterious "scientific" research. What they were doing there is a mystery, but Wilde is convinced it is related to the unknown planet Nibiru, and may hold the answers to ancient secrets, unimagined power, and proof of alien visitations. Yes, you heard me -- the aliens were here and Martin has a mission to find the proof. With a quick stop in Marseilles for equipment and vital information, our daring explorer is soon on his way to Prague for a midnight rendezvous with an inside contact. Of course, everything goes wrong; his contact never shows and Martin is left to his own resources to infiltrate the underground Nazi complex, breach its securities, and uncover clues vital to his quest. In classic Indiana Jones style, the game sends Holan on a global trek, racing against time and a determined nemesis and his henchmen.

Along the way, Martin encounters a wide variety of personalities, which are a definite strength of the game. Besides Martin's uncle, we meet a tired fisherman, an old (and slightly deranged) former Nazi scientist, an Incan mystic, and an annoying tourist, to name a few, and it's an engaging and credible mix of characters. There is also a great deal of dialogue, both automatic and player-controlled. Though a few of the auto conversations are overly long, the lines are well written and many game clues and plot points are revealed. NIBIRU pays homage to the Broken Sword games in many ways, both subtle and obvious. One that will look very familiar to fans of that series is the dialogue system. Rather than written lines, there are dialogue icons at the bottom of the screen. Clicking on one of these topic symbols brings up a related question to ask, which works as well here as it has in the past.

Unfortunately, the voice acting is a mixed proposition. On one hand, the accents and sound quality are fairly good. However, similar to Black Mirror, the delivery itself is sometimes wooden and poorly directed. Martin speaks and moves in a stiff and contrived way, as do a few others in the game. In context of the overall gameplay, it seems like a minor annoyance, but it needs to be noted. And for those who live and die on voice talent, this will definitely annoy. 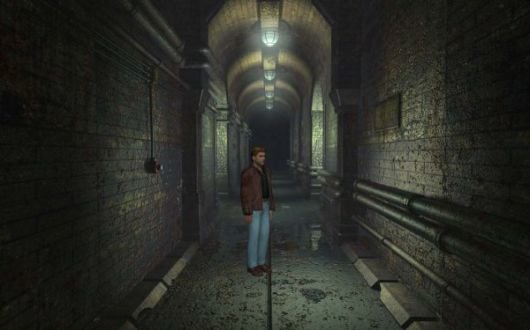 The original game displayed graphics that would clearly be dated by today's standards, so to update them, the developers used a new engine, new backgrounds, and 3D modeled characters, creating a whole new look to the game. Though there are some grainy background elements in the 2D pre-rendered backgrounds (most notably the skylines), the refurbished graphics look excellent overall. There are a few places where the interactive options are a bit sparse, but most locales are rich in clickable items and details. These elements, though not always essential to advancing the gameplay, provide interesting backstory or fun commentary. There are not a lot of cinematics, as is more common in many games these days, but the ones that are included work well. One odd thing is that the existing cutscenes obviously date back to the original game. This creates an odd schism between the cinematics and the newer in-game graphics. The main character has a more realistic look in the animated scenes, which contrasts sharply with the more cartoon stylized approach to the playable version. It isn't anything that detracts greatly from the game; just noticeable and a little jarring. Although the walk sequences and movements of the 3D characters can be a little stiff at times, their facial movements and overall appearance are easy on the eye and add depth of personality to the cast. The updates here were clearly thought out and worth every penny, because this is a definite strength of the game.

What is impossible to ignore, and a severe blow to what would have been solid gameplay otherwise, is the puzzling. Actually, it is just a few that tarnish the experience, but they are that bad. This moves into spoiler territory, so consider yourself warned. Through most of the game, I was having a very relaxing, fun time. It doesn't break innovative barriers in the slightest, but there is a comfort and ease to the familiar style of point & click, third-person gameplay. That aspect added to the nice, steady pace, and interesting characters in a story with enough novelty to distinguish it from its more generic counterparts. The early challenges are a bit on the easy side, but they fit in with the game story and environments. They are just difficult enough to engage you, but don't bring your game to a grinding halt… 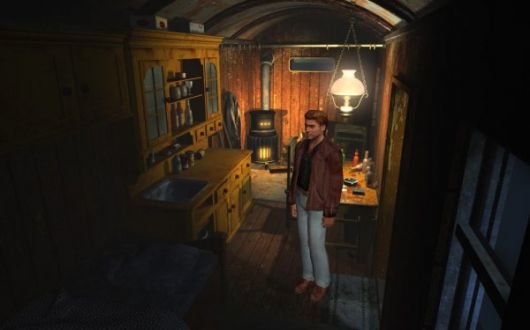 Then it happened. That moment that makes you smack your keyboard and yell at your screen, "What on earth were they thinking!!" In NIBIRU's case, it is a puzzle. More accurately, the poster child for obscure, mind numbing, game-killing puzzles. Based on some twisted version of a multi-ringed Rubik's cube, it is sprung on the unsuspecting gamer without the slightest warning or hint that this type of nasty challenge could be in the game. I went from a cheerful to militant player during the time I spent working painstakingly through this puzzle. During this time, I nearly completed it once, only to realize near the end that I had the outer ring hopelessly deadlocked. Yes, did I mention yet that there is no reset button? So my careful saves at each completed segment now meant I had to go all the way back to the beginning of this level. At this point, I did what many an exhausted gamer does -- I sought out a hint sequence to this puzzle, which has over 35 primary and secondary moves. Since the solution is a bit obscure itself, one error means restarting the whole thing. Finally, weary but unbeaten, I got past this travesty and got my reward… which was a rock. Yep, you heard that right: a rock. Still, that wasn't a problem for me, as the game had been pretty good, so I was prepared to move on and enjoy what's left. That optimism lasted until the next major puzzle -- a slider -- reared its ugly head. And this isn't just any old slider; this one is combined with a sadistic version of the memory game. Under the tiles are pictures of the same set of tiles. The pictographs on these tiles are generic Mayan symbols which are virtually indistingishable shapes and face-like squiggles. You have to move the top tiles bit by bit, grabbing peeks and taking note of the symbols underneath while hoping you haven't scrambled the slider part out of fixable range. Only THEN do you start the actual slider moves. The slider itself isn't that difficult once you write down the symbols, but getting there is far too punishing, and more tedious busywork than challenge.

I realize this is bordering on subjective rant territory, but I feel like people need to know what lies ahead BEFORE they plunk their scant dollars down, or at least before they start framing their expectations based on their early experience playing the game. That being said, I still recommend NIBIRU, with some obvious caveats attached. If that sounds inconsistent based on my experience with those two puzzles, I need to return to my earlier comments. The game is basically comfortable, familiar, well-crafted fun. For fans of classic games like Broken Sword, NIBIRU: Age of Secrets is a slightly poorer country cousin. With its tried and true storyline, diverse cast of personalities, spruced up graphics, largely inventory-based puzzling, and 12 or so hours of gameplay, you get generally good value for your money. As for the two nightmare puzzles, get a hint, a solve, or better yet a saved game, and move on, because otherwise the game definitely warrants a look. Although NIBIRU is updated, it remains at its heart a classic mouse-driven adventure, and provides a kind of gaming equivalent of comfort food. It may be a guilty pleasure, but it's still reasonably good fun.

NIBIRU: Age of Secrets is available at:

A good game is smudged by some obvious flaws in the gameplay that prevent it from standing with the greats. But fans of classic gaming will get a generally enjoyable game due to the story, inventory puzzling, diverse characters, and good looking graphics.

GAME INFO NIBIRU: Age of Secrets is an adventure game by Unknown Identity released in 2005 for PC. It has a Illustrated realism style, presented in 2D or 2.5D and is played in a Third-Person perspective.