I was ten years old the first time I played King's Quest I: Quest for the Crown. I bought it with my birthday money, back in the days when 3D simply meant your character could walk behind some things and in front of others (cutting-edge technology!) and text parsers still reigned supreme. This first King's Quest game is widely recognized as the grandfather of animated graphic adventures, and the hallmark of Sierra's two-decade dominance in the industry. It was initially released in 1983 to promote IBM's ill-fated PC Jr. Releases in a number of other formats followed, including a DOS version that used Sierra's 16-color, 160x200 resolution AGI (Advanced Graphics Interpreter) engine and still works on today's PCs. Obviously, KQI can't compare to more recent games as far as graphics, interface, or technology go, but modern players can still judge the game for what it tries to be and how well it pulls that off. This is what I attempted to do when I recently replayed it, almost twenty years after it got me hooked on adventure gaming.

King's Quest I: Quest for the Crown tells a simple story of a knight, Sir Graham, who has been summoned by his monarch, King Edward the Benevolent, to perform a quest crucial to the country of Daventry's future. The game opens with Graham standing outside the castle. Upon entering, he learns from King Edward that three magical treasures have been stolen: a mirror that shows future events when you look into it, a chest that's always full of gold coins, and a shield that protects anyone who carries it. Without these items, Daventry's military is in a shambles and the kingdom has fallen into economic ruin. King Edward needs Graham, his best knight, to go out and retrieve the three lost treasures, along with any other valuable trinkets he happens to come across.

It struck me as odd, even the first time around, that three items whose disappearance has caused such monumental damage to Daventry should be so easy to find. Not only that, but this desolate kingdom just happens to be loaded with treasures sitting around in birds' nests and hollow logs. Apparently Edward, so caught up in Daventry's problems, couldn't be bothered to look right outside his own castle door. Or maybe Graham's just that good. 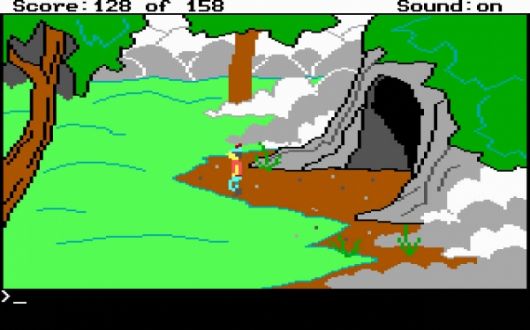 But I digress. The point is, it's your job to explore the eight-by-six-screen grid of countryside, looking for the three lost treasures and anything else of value you can find. It's hard to say how long it would take a new player to finish the game, since I already know all the puzzle solutions, but none of them are especially difficult. The gameplay relies heavily on fairy tales and legends; if you know the fates of Hansel and Gretel, Rumpelstiltskin, and the Billy Goats Gruff, you're already a few steps ahead. KQI has a point system, and since some actions are optional, it's possible to win without getting all the points. Back before hints were so readily available, this gave gamers a major incentive to replay. There are multiple solutions in certain situations, with more points being awarded for more intricate or non-violent approaches. Some solutions even result in points being taken away. Such flexibility is rarely seen in today's games (although recent offerings such as Kheops' Return to Mysterious Island are reintroducing the concept), and it's interesting to look back at this simple adventure and wonder when gameplay changed so drastically.

These were the days before hotspots, and even before usable items stood out graphically from the backgrounds, so be prepared to look at everything on the screen and try whatever you can think of. Even knowing the game by heart, I found the text parser a little annoying, and it has the potential to be downright maddening for someone who's not used to typing commands. The parser has a fairly limited vocabulary. It understands "Save game" but not "Save," and at one point I got so frustrated trying to figure out how to use some pebbles with a slingshot, I committed suicide by hurling Graham down a flight of stairs. But for the most part, since the game's actions themselves are fairly simplistic, the text parser isn't a hindrance.

Something a lot of players complain about in King's Quest and other Sierra games of the time are the many ways to die. This never bothered me; I just learned to save often. Although a few of KQI's deaths are unpredictable, most happen for a logical reason, such as walking into a moat teeming with alligators. They may be frustrating, but they're nowhere near as random as some disgruntled players would have you believe. There are certain screens on which an evil character (wolf, sorcerer, ogre, or witch) can overtake and kill you. Even this isn't really random, though, because they always show up on the same screens. Making a simple map will help you avoid them, and in the absence of that, you can steer clear of them by staying near the edge of the screen and escaping if they turn up. Without consulting a map, and without remembering where these baddies hang out, I died a grand total of zero surprise deaths during my replay of King's Quest I. Those who love to hate Sierra's deaths are going to complain about them no matter what, but it's really not as bad as the naysayers would have you think. 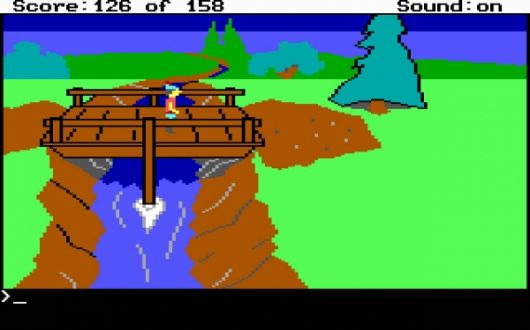 After completing the original, I played through Sierra's Quest for the Crown remake, which was released in 1990 to celebrate the company's tenth anniversary. This game was developed with AGI's successor, the SCI (Sierra Creative Interpreter) engine—still a text-based interface, but with higher-quality graphics and a number of other improvements. This was my first time playing the SCI remake, and I was pretty impressed. The basic plot remains the same, but the addition of fully-animated intro and closing sequences make the story feel much more immersive. The remake also features an orchestral soundtrack that's still basic by today's standards, but a vast improvement over the beeps and boops of the original. (It's especially impressive under the Roland MT-32 setting, which was state of the art at the time.) A few gameplay tweaks were also made, apparently in response to player feedback. I must not be the only person who had a hard time figuring out how to use that slingshot, because in the remake if you type one of the seemingly-correct incorrect phrases, the game responds, "Just type USE THE SLINGSHOT."

None of these enhancements are particularly groundbreaking in 2005—the game is still quite dated—but having just played the original, it put me in the mindset of someone playing the remake when it first came out. The improvements show how much adventure games and the technology they were built on had progressed in seven short years. The SCI remake even has the early trappings of a point & click interface, allowing the player to control Sir Graham with the mouse as well as the arrow keys. This makes some of the more precarious trips up magic beanstalks and down rickety staircases a bit easier to master, not to mention being a pretty exciting innovation back in the day. Even if you don't play both versions of the game all the way through, moving from the AGI original to the SCI remake is a fun trip for those curious to see how modern adventures evolved. To complete the journey, also check out the fan-made VGA remake, a project that brought King's Quest I into the new millennium with updated graphics, a full point & click interface, voice acting, and a digital soundtrack.

I've been stalling on writing this review, for the simple reason that King's Quest I is a very hard game for me to score. Admittedly, as a stand-alone game, the original KQI is not too impressive by today's standards. Innovations such as rocks that roll downhill and a character that can walk behind trees and swim through lakes are hardly as exciting now as they were in 1983, and forgiving the game for being more than two decades old doesn't make it more fun to play. On the other hand, it's a fairly well-structured game, with lots to try out in the confines of the little world, and it's a neat glimpse into history. So I'm settling in the middle of the scale with an even three stars. You might love it for what it is, or hate it for what it isn't. You'll either be charmed by its antiquity, or disgusted by its simplicity. I don't know. What I do know is that I loved this game as a kid. It's the game that introduced me to Daventry and to Graham's adventures, the game that got me into adventure gaming altogether, the game I solved all by myself when I was ten. For those reasons, subjective as they may be, King's Quest I will always have a special place in my heart… and in my collection.

King’s Quest is available at:

If you're looking for a short, simple fantasy game and have nostalgia for the classics, the original King's Quest just may fit the bill. If you like your games a little more refined but can still hold your own with a text parser, check out Sierra's SCI remake. Or to see where it all began without the pain of reliving the 80s, play AGD Interactive's VGA remake, a faithful (and free!) point & click adaptation that has been endorsed by the copyright holders.

GAME INFO King’s Quest is an adventure game by Sierra On-Line released in 1984 for Mac, PC and Retro. It has a Stylized art style, presented in 2D or 2.5D and is played in a Third-Person perspective.

What our readers think of King’s Quest: Quest for the Crown

A piece of history

Perhaps King’s Quest’s primitiveness is its major downfall, but it is also the game’s redeeming joy. The simple aesthetics evoke not only a medieval fantasy world but a world where graphic adventure games were born.... Read the review »

Light spoilers ahead. For the record, this is based the Apple II version of the game (played on the emulator Kegs32). I had no idea until recently that Mac users got the benefits of more... Read the review »