Tony Tough: A Rake's Progress is the sequel -- or more accurately, a prequel -- to an underrated game. The erratic and limited distribution runs left large portions of the world unable to get hold of Tony Tough and the Night of the Roasted Moths. Fortunately, it still sold well enough to warrant a follow-up, initiated by German publisher dtp, who demonstrated the upcoming game for us at E3. The original was a surreal comedy game, with bizarre characters and interesting locations, and the sequel seems set to continue in much the same vein, though with a decidedly different look.

The new game is again based around the exploits of Tony Tough, a short, nerdy, squeaky-voiced private detective. This time the adventure is set years earlier, when Tony was a child in 1953, growing up in his home town in New Mexico. Based around 300 miles from the notorious Area 51, the plot involves the Roswell UFO landing mythology and alien abductions. In the course of our story, Tony embarks on his first "case" as private detective in a bid to track down his pet dog Pantagruel (whom fans of the first game will no doubt remember), as well as other town inhabitants who have mysteriously gone missing.

The section we played began with Tony arriving late for school. No matter what response Tony gives (mostly smart-aleck replies, given the nature of the game), he is forced to stay behind for detention after school. Of course Tony isn't content to sit through detention, so we need to work out a means of escape. Aside from the eventual imaginative solution, there are a number of amusing additional things to be tried that don't have any real effect, except to entertain. Whether it's putting thumbtacks on the teacher's chair or balancing full buckets over doors, there are more optional activities available than in many other modern adventures. 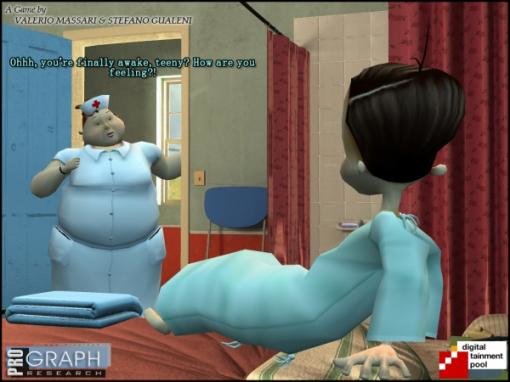 After his escape, Tony wakes up in hospital (due to the bizarre method he uses to get out of detention). Unfortunately, Tony can't just lie back and relax now, since his father is a doctor at the hospital in question, and he understandably doesn't want the nurse telling his dad how he ended up there. Again we must escape from a small room using what limited inventory we have. I won't reveal just how Tony manages to get out of the room, but rest assured there's a lot of slapstick humour and inventive use of inventory combinations. This was as far as the playable demo took us, as the rest was taken up by a wander around the various locations in Tony's town.

A Rake's Progress will mostly take place in town, just as the first game was confined to a theme park. That game still managed to cram a variety of interesting locations into a limited environment, however, and the sequel promises to offer 30 or so distinct areas. Outside of Tony's school and the hospital, the town was largely devoid of characters or much to do, but the demo was an early build of the game, and we were promised there will be plenty of non-player characters populating the gameworld. The game also looks to provide a balance between linear progress and non-linear exploration between locations.

As reflected in the screenshots, the bright, colourful, and bizarre locations in the first game won't be quite as evident here. The game designers have said they're trying to keep the look and feel of the locations as true to 1950s New Mexico as possible, which precludes the vibrant colours and strange architecture of the fairground in the first game. Unlike the original, backgrounds and characters in A Rake's Progress are in full 3D, with dynamic lighting that casts shadows and sunlight in the appropriate places. Camera angles switch and rotate as Tony moves around locations, always providing a clear view of the current area. There are also full animations for every action, including picking up and putting away objects -- no mysteriously disappearing inventory items for Tony Tough. 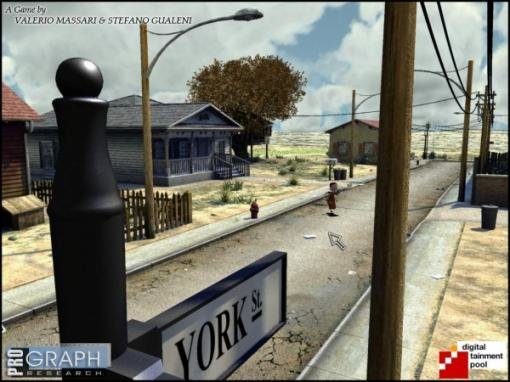 Despite the graphical changes, the game still uses a point & click interface, with a typical scrolling-through-verbs style using the right mouse button. Double-clicking the walk icon on a location makes Tony run towards it, which is something that those of us used to characters all but crawling across screens will appreciate. Dialogues are icon-based, with the type of questioning (serious, humourous, or topical) selectable. Many of these are purely optional, with the more specific lines of questioning yielding information regarding the quest.

The game appears to continue its predecessor's dark, sometimes off-colour sense of humour through Tony's wry observations and the inclusion of "breaking the fourth wall" comedy (making references to the game you're playing being exactly that -- a game). Characters will all be fully voiced, with Tony's distinctive prepubescent-sounding voice making a return. The vocabulary in the version we played was a little awkward. However, dtp told us that full localisation is planned closer to release, so any linguistic niggles will be straightened out before the game ships.

Tony Tough: A Rake's Progess is due for release near the end of the year. Currently, only a German version of the game has been confirmed, but dtp is actively looking for international partners, so there's reason to hope the sequel will get a larger distribution than the original. It's a little too early to form any definite impressions of the game, but our early look at the game was promising, and it could very well be a hit with those looking for an irreverent comedy adventure. 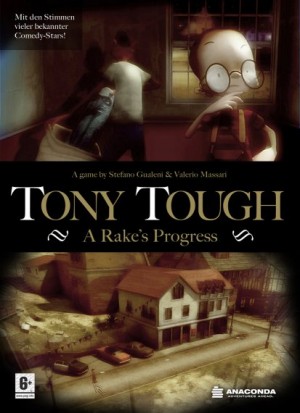