Shadow of the Comet review

The Quest for the Time-Bird

We get a small commission from any books sold.
All Bitmap Books
Written by
Rob Franklin — February 18, 2005

If I say to you, “France,” what’s the first thing that pops into your mind? It’s probably something like nice wine, fine food, or possibly Gérard Depardieu’s nose. It’s unlikely that you’d associate adventure games with the hexagonal republic. Au contraire, mes amis, as it’s thanks to Infogrames, France’s most famous computer game designer, that the world has been able to enjoy, in my opinion, the greatest horror adventure game ever created. For it was in 1993 that Infogrames revealed to the world the lurking horror within the Shadow of the Comet.

Shadow’s full title is Call of Cthulhu: Shadow of the Comet, and is based on the works of H.P.Lovecraft and the Cthulhu mythos. Although not a direct adaptation of one of Lovecraft’s books, Shadow sticks closely to the themes and characters created by Lovecraft, and contains elements familiar to people who’ve read The Shadow over Innsmouth, Call of Cthulhu and The Dunwich Horror. The game is set in 1910 in the small village of Illsmouth. You play John Parker, a journalist who requests to be sent to Illsmouth for the passing of Halley’s Comet. The comet passes over Illsmouth so clearly that it is visible to the naked eye. Parker, however, has an ulterior motive, for the last time someone went to investigate the passing of the comet at Illsmouth--a man named Lord Boleskine--he came back a raving lunatic and subsequently died in a mental institution.

Upon arrival at Illsmouth, Parker soon realises that things are not as they seem in the idyllic New England setting. Something ancient lurks beneath the town, waiting to be reawakened. The story that unfolds is a gripping tale of mystic Lovecraftian cults, old grudges, unspeakable horrors, and some of the freakiest NPCs ever seen in an adventure game. 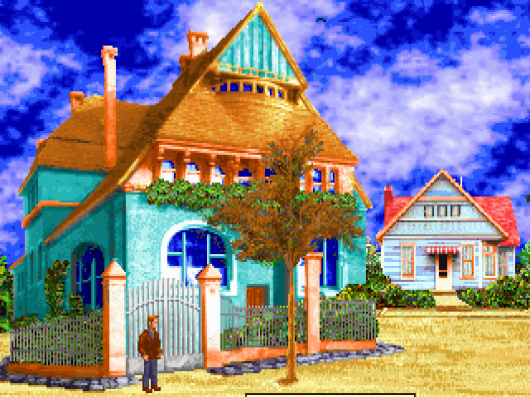 I remember Shadow from when it first came out (I was only 11). I kid you not when I tell you I was scared stiff playing this game. Words can’t describe how terrified I was walking the woods surrounding Illsmouth in the dark. Yet despite being absolutely petrified of the opening introduction alone (the image of Boleskine laughing maniacally and frothing at the mouth from the window in his cell still sticks in my mind even after another 11 years), I still felt myself needing to play this game to discover what was happening in this bizarre village. From the moment you arrive at Illsmouth, you know you’re in for a scary ride--the music is just as unsettling now as it was then, and creates a claustrophobic atmosphere that would make even the hardest horror fan uneasy.

The narrative of the game is split into three days. The first day is spent finding out about the weird events that occur in Illsmouth. Many revelations happen on this day and automatically captivate the player into wanting to press on and discover their meaning. By the second day, Parker’s in well over his head and spends most of the day dying in some of the most horrific ways imaginable, or finding that he really should have stayed in bed that morning. Finally by the third day, everything has come to a head and Parker finds himself having to confront four of Lovecraft’s “Great Old Ones”: Nyarlathotep, Dagon, Cthulhu and Yog Sothoth.

Shadow is a traditional adventure game in the sense that the puzzles are inventory-based and you progress by talking to as many people as possible, but there are some significant differences between this and its contemporaries. First, the interface is similar to that used by LucasArts in Grim Fandango, but a lot more rudimentary and in a 2D environment. You control Parker with the arrow keys on your keyboard, and interact with the environment using certain hotkeys (for example; g = grab, l = look etc.) The player is made aware of something to pick up by a dotted line appearing between Parker’s eye and the object, as if it’s in his eyesight. 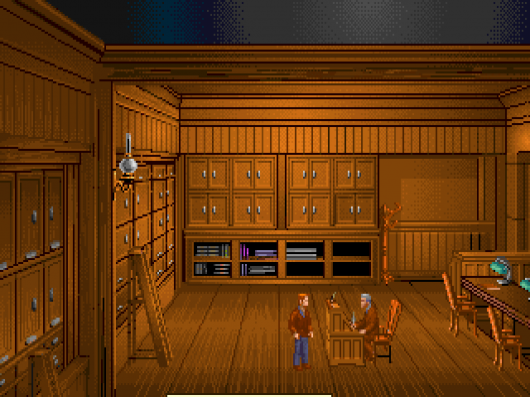 The problem with this system is that only objects you can pick up create this line of sight, and not things Parker can open or simply look at, leaving you to miss an awful lot of potentially vital information because you didn’t know it was there. Infogrames later tried to address this problem by including mouse support for their CD-ROM re-release. The newer version allows you to use the mouse to move Parker, but not in your typical ‘click the ground and he’ll move to it’ kind of way. Instead, you move the cursor in the direction you want Parker to move, and then hold the mouse button down whilst he walks. It doesn’t really solve anything, as it just complicates moving Parker, plus it still doesn’t highlight parts of rooms that Parker can interact with rather than pick up.

As well as the problem with the interface, there are a few other flaws and design decisions that could prove to be turn-offs for some people. First, the graphics are not breathtaking. There’s nothing strictly wrong with them, but when you compare them to what other developers were doing at the time, you’ll see they could be better. The houses and shops around Illsmouth are colourful and especially spooky when seen at night, and the same can be said for the woods. However, the sprites--specifically Parker--do not look as good as they could. The faces are just amorphous blobs with a line across the centre to denote eyes. When seen head-on, Parker seems to resemble Gork from The Day the Earth Stood Still rather than a human being. Also, the developers haven’t included many in-game animations, so Parker will regularly just walk to a chair and then miraculously be sitting down. Infogrames compensated for this by including some specifically important animations that appear as close ups. For example, if you exchange an important item with someone, you’ll get a close up of Parker’s hands exchanging the object.

I suppose the biggest issue with the game is the sheer difficulty of Parker’s task. This is an incredibly tough game that will take even seasoned gamers a very long time to complete. By the second day, you’ll be lucky if you don’t die at least once every half hour, and towards the end of the same day, every five minutes. There are so many pitfalls and traps set up by the villagers to bump off the unsuspecting Parker that it proves exceedingly prudent to be saving every time you do anything remotely important, because once Parker has gone to meet his maker, you are forced to manually restore from the last save point. Personally I didn’t find this a problem, because I like to be challenged when playing a game, but if you’re looking for just a light game to work your way through when you’re bored, this probably isn’t the game for you. 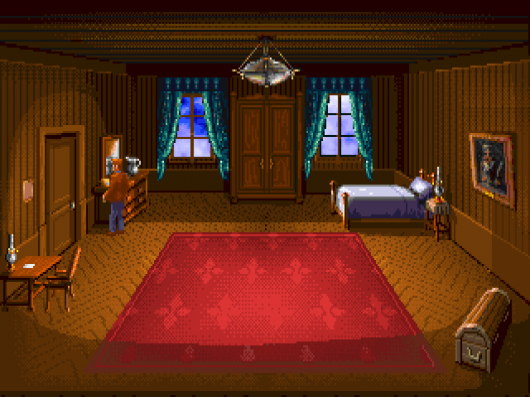 Finally, the puzzles can often be very tricky. They’re largely inventory-based with a few time-limit puzzles thrown in for added panic value. These timed puzzles are easy, as long as you can remember which way you came, although a lot of saving is necessary, especially in the crypt maze. The inventory puzzles are less straightforward, and require the player to think laterally as well as literally. After all, this is a supernatural force Parker’s up against. There is no logical progression of the puzzles, either, so if you miss something at the start of the game, it’s highly likely you’ll be stuck later on and will need to go back to previous saved games in order to redo it, which is something that could put a lot of impatient people off. Nothing is as it seems in Illsmouth, so make sure you listen to everyone but trust no one. A small amount of note taking will be necessary throughout the game in order to log important facts. Thankfully, Parker keeps his own journal that you can read to glean important information.

All of these points remain trivial, however, when you look at the game as a whole. The difficulty of the game adds to the atmosphere that envelops Shadow, and the inability to trust anyone adds to the paranoia and feeling of isolation the player experiences when playing the game. In fact, Infogrames has created the perfect atmosphere for a horror game and then ladled it on so thick that players will almost feel like they’re drowning in it.

It’s this atmosphere that makes Shadow of the Comet so spectacular. The music is as memorable now as it was then--spookily catchy and loaded with feelings of dread and paranoia. Even on an old midi soundcard from back in 1993, the music instantly sets the tone of the game without becoming annoying and interfering with the gameplay. The sound effects, especially in the woods, make for a truly terrifying wander around Illsmouth. The voice acting, although a little fuzzy at times, also makes for an unsettling experience. Infogrames really hit the nail on the head with suitable voices for the villagers of Illsmouth. 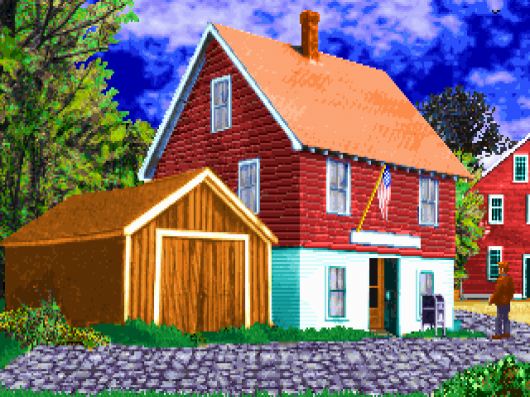 The crowning glory of this game, and the reason why I found it impossible to stop playing, is its story. From the humble beginnings of Parker’s arrival at Illsmouth to the inevitable race against time at the end, Shadow is a giddy ride of murder, mystery, mayhem, and the occult. Infogrames went to great lengths to create a story that did justice to the works of Lovecraft. Chaosium, experts on the works of Lovecraft and the Cthulhu mythos, were brought in to aid in the writing process.

In my opinion, the horror genre is vastly overlooked when thinking about adventure games. If you can’t scare the begeesus out of someone with loud noises and a rubbish monster lurking round a corner in some lame action game, then it seems it’s not worth bothering with. But this game proves that with atmospheric music and a damn good story, you can easily create a game that’s as unsettling to play as it is engaging.

Shadow isn’t instantly accessible, and takes a while to get the hang of, but perseverance definitely pays off. Assuming you can deal with the die/reload method of gameplay you’ll encounter, anyone with an interest in good, challenging, lengthy adventure games that make you think will love this game. It’s no surprise that Shadow of the Comet was a key player in defining the horror sub-genre of adventure games. If you dare travel to Illsmouth, you won’t be disappointed.

This game has to be experienced to be believed. It’s definitely for the seasoned gamer only, but it’s a fine reward for those who’ve been looking for a challenging adventure game to sink their teeth into.

What our readers think of Shadow of the Comet

This is a great old school point&click horror game, based on the H P Lovecraft writings and loaded with beautiful tableaus and dialogue portraits. At least it is a very good game up until you... Read the review »