We first saw Still Life at E3 2004, and knew right away that the game was loaded with potential. As it draws closer to release, anticipation is building for this dark, brooding serial murder mystery that promises to be one the hottest games of 2005. Although working hard to get the game finished, Microïds graciously accepted our invitation to discuss the game in more detail.

Please introduce yourself and tell our readers your role in the development of Still Life.

Tell us the background of the story to Still Life.

There are two settings in the game. The first is set in modern Chicago. In this setting, we get to play as Victoria McPherson, an FBI agent who’s been assigned to help local law enforcement with a serial murder case. She heads the task force with the help of Detective Miller, Claire Ashby and Officer Tate.

The second setting is in Europe in the late 20s; more specifically in the city of Prague. You get to play Victoria’s grandfather Gus McPherson, a private investigator. Gus takes on a serial murder case. Ida, Gus’ girlfriend, brought the case to his attention. Gus is alone but meets some very interesting and mysterious characters.

Since Gus McPherson was the main character in Post Mortem, will those who haven't played Post Mortem have any difficulty picking up on the story details of Still Life? Or is the connection between the two only a minor one?

The player will not be hindered because he or she never played Post Mortem. Still Life isn’t a sequel to the Post Mortem adventure in Paris. Actually, the Post Mortem connection is interesting. As we were creating Still Life, Post Mortem’s Lead Designer, Stéphane Brochu, saw our presentation. Our original idea for Still Life was set in three different periods, and included the late 20s period in Prague. Stéphane suggested adding Gus to the storyline. I thought it was a great idea, especially since we already had a grandfather in the story, so we adapted to include Gus. At the time, I thought it would make the story richer, and seeing the (almost) final product, I believe it did. In addition, Gus was already designed and it lessened the design and artistic workload. The story was totally independent of Post Mortem to begin with, so players won’t have any problems connecting dots.

You're drawing from the back-story of Post Mortem for this game. Why the decision then to switch to the third-person Virtools engine of Syberia? In a more general sense, why third-person over first-person?

I sincerely believe that when telling a story with rich main characters, it’s important that it be a third-person view. Events are happening to the main character, like in a movie. The richness of the character and of the story will pull the player in. If you decide to have a first-person adventure game, I strongly suggest making the main character as neutral as possible. Since the first-person’s view is already very immersive, it’s important not to interrupt that immersion by imposing a character with a defined personality and character. Since Still Life’s story had rich characters, we decided to go for the third-person view. Plus, we had a certain expertise already established with the two Syberia productions. 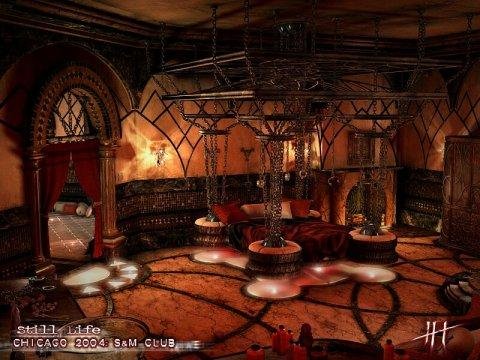 Will the Virtools engine in Still Life be basically identical to that of Syberia 2, or should we expect some improvements?

The pathfinding that was known to have certain issues with past productions has been improved. A new addition is the shadow casting which will bring more atmosphere to the 2D environments. We’ve added features such as a full screen interface, a window to closely examine objects, a new dialogue system and much more.

Microids is, by now, a veteran of modern adventure games. What lessons do you feel you've learned from Syberia, Post Mortem, and Syberia 2?

Still Life will definitely showcase the experience gained on those productions. The artists from Syberia as well as the integration and programming teams from both productions have played a crucial part in not repeating past mistakes. The design team took great care to create puzzles that are well balanced in difficulty, not too easy and not impossible.

The dialogue was one of the most criticized areas of Post Mortem. How much of a priority are you putting on the dialogue of Still Life? Will there be a relatively large amount of dialogue?

We’ve entirely changed the dialogue system. We’ve come up with a design that we believe can make a lot different players happy. The conversations are divided into two categories: business and off-topic. We’ve separated these two categories in the left mouse button (business) and right mouse button (off-topic). So for players who want to get to the point quickly and move on, they may do so by left clicking. The right click is for more personal or offbeat subject matter that adds depth to the characters and the story line. These conversations do not hide special information; thus skipping them does not interfere with the flow of your progress. They are simply there to add more flavor.

How essential will character interaction be in Still Life?

All I can say is, pay close attention to what people tell you.

Please comment on the recent reported layoffs at Microids, and how they have affected or will affect the development of Still Life.

First, I want to emphasize the fact that these layoffs are only temporary, and our team members will be called back to work within the coming months. While not an easy decision, it was one that management had to take to ensure the future of the company. It will give Microids time to readjust a new long-term vision for future productions. The good news is that Still Life’s production was unaffected by the recent cuts.

The puzzles in Syberia were certainly on the easy side; do you anticipate that you will produce more difficult, and more varied puzzles in Still Life?

The design team focused on bringing players innovative and story-driven puzzles. Focus groups have helped us adjust things along the way. I think we came up with a good balance of not too hard and not too easy.

What element of Still Life do you believe will be the centerpiece of the game--the story, the characters, the puzzles, or something else?

The story. Of course the puzzles and characters play a very important part in any adventure game but here we tried to bring you a story that has never been told before in a game. We took great care in telling the story but also in presenting it. Cinematic cutscenes, the music and what is said during the dialogues will keep players at the edge of their seats.

Talk about the technical aspects. What are you doing to ensure that Still Life will be the best-looking game released by Microids?

The experienced artistic crew of Syberia 1 and 2 has helped us achieve just that. Also the improved Syberia 2 engine will allow for new artistic effects (fog, water animation, shadow casting, water reflection), which means you’ll be blown away when you get your hands on Still Life!

Myst IV shook things up a lot when it was released on DVD-ROM only, and now there are other projects going that direction. Has any thought been given to a DVD release of Still Life?

No. The game will be available on standard CD-Rom.

One of the criticisms of Syberia is how non-interactive the world is; i.e. Kate couldn't give the player a description of the things around her. Is this something that will be changed in Still Life?

Yes. Victoria has a stronger personality then Kate Walker. Vic tends to comment about things in her environment making the game a little more interactive.

We have heard tell of the dark, adults-only tone of the game; how graphic and disturbing are you going for? Are you planning a lot of visual horror, or will the disturbing elements be mostly psychological?

Still Life does have murder scenes and dodgy subject matter, but I believe that we stayed out of the horror genre and remained in the thriller genre. It’s obvious that you will see dead bodies in Still Life. You have to examine crime scenes and yes, there is the body of the victim present. We did our best to stay away from in-your-face gore and remained more on the psychological side of things. 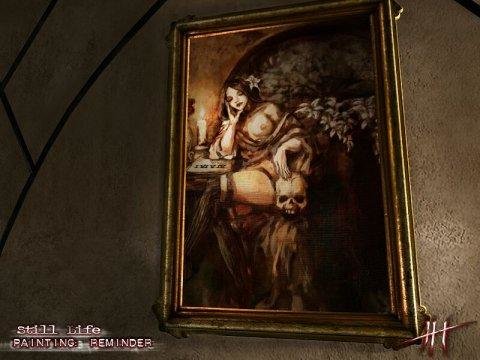 It seems that many recent adventure games have been pushing more for a somber and mature tone, and away from the "cartoon adventure" type of game. Do you see this as a trend that will last a long time or is it just another cycle in taste?

I think it’s a trend that will last a long time. There will always be a market for somber adventure games. Just ask the people who slow down on the highways to catch a glimpse at a car accident. We’re also seeing TV shows like CSI growing in popularity, so I think people can handle it…

The trailers make it evident that Still Life will be a very intense game, and likely the sort of free-spirited tourism roaming of Syberia would detract from that. How do you implement intensity within the confines of a traditional adventure game? Will there be any action or timed sequences?

There are no action or timed sequences in the in-game portions of the game. Pure action will be handled by the cinematic sequences. The intensity relies on Still Life’s story and the general atmosphere of the game. Since the story has two different time periods, it makes it easy for us to add suspense. We hope that our players, when playing in Chicago, will long to play in Prague and vice versa.

What is it that inspires you to create realistic, more somber adventures rather than humorous, cartoon-influenced ones?

First, as a writer, I sincerely believe that writing humor is harder than just writing about everyday life. Plus, our artistic talent here at Microids is more specialized in “realism” rather than cartoon.

What recent adventure games have inspired you in the development of Still Life?

Honestly, none. The inspiration came mostly from films, books and my slightly demented mind!!!

Still Life presumably will be released on Xbox like the Syberia games. Certainly the console market does not seem to be very enamored with adventure games; what has motivated the release of these games on a console platform?

We have to keep trying!!!

Is there anything else you'd like to tell our readers?

I hope you enjoy Still Life. I know we enjoyed making it and if you have half the fun we had while developing, we know we’ve done our job!