We get a small commission from any books sold.
All Bitmap Books
Written by
Claire Wood — March 27, 2003

"This isn't what I want in life. I should be a hero. Heroes don't run errands!"

Introduced to the world of Torin's Passage by a cinematic opening sequence, filled with kidnap, regicide and treachery, I prepared myself for a game of suspense, excitement and adventure. With a traditional fairytale plot, bizarre characters and one extremely irritating companion, it was always going to be difficult for Torin's Passage to deliver.

After a revealing opening sequence, the game begins with our brawny young hero Torin, deploring his mundane life in the country and secretly aspiring to be a hero. Our hapless protagonist gains this opportunity sooner than expected when his parents disappear in a whirlwind of hocus-pocus. A shadowy informant materializes, telling Torin this magic is the work of a powerful and evil sorceress, long banished to the Lands Below for her wickedness. With little thought for his personal safety (and indeed, little thought at all. One soon discovers Torin is hardly the brightest spark in the metaphorical fire) he chooses to embark on a life-changing quest. Essentially depicting Torin's passage into adulthood, he encounters an unassuming love interest, befriends a number of characters not out of place in Lewis Carroll's worst nightmare, and thwarts the nefarious plot of a shadowy nemesis.

The land of Torin's Passage, known as Strata, consists of a series of five nested worlds, each more colourful, inhospitable and bizarre than the last, with its own characters, eccentricities and challenges. Travel is achieved by using "phenocrysts", a crystalline teleportation device. Seeking out these devices having first overcome a number of well-placed obstacles is your major task in each subsequent world. 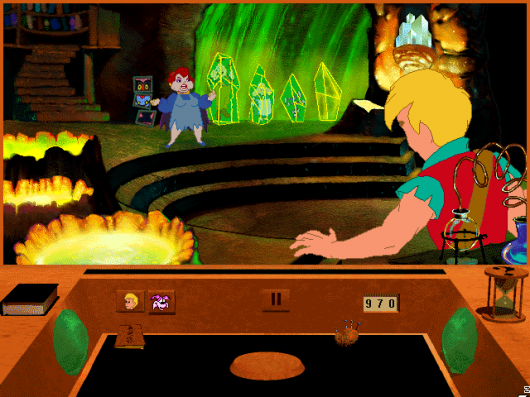 The interface is typical of late Sierra adventure games, and is essentially that of King's Quest VII: The Princeless Bride. Played from a third-person perspective, the gamer controls Torin's actions using a "smart" pointer. When rolled over a hot spot in Torin's environment, it glows white, allowing for interaction. No glow, no go. While this is a useful innovation for novice adventure gamers, it suffers from the same over-simplicity that hurt King's Quest VII. In the first world, the Lands Above, there are many hotspots—some provoking humorous comments from our protagonist, others used to solve problems or collect as inventory. However, by the third world, these hotspots quickly dry up, so that every opportunity for interaction becomes essential to your quest. This had the unfortunate effect of narrowing the range and variety of puzzles, and meant that several worlds were hollow and failed to capture my interest. The interface also contains a scanning platform for inventory objects, allowing the gamer to view inventory in 3D and rotate it. Although initially appealing, this element is criminally underused, with few real applications in the game. Comments from Torin on his inventory, instead of the ability to rotate it would have been more use—and more entertaining. The gamer is also offered the option of a "Script" feature that records the dialogue to be reviewed at leisure. Again, I barely used this feature of the interface, and perhaps the effort put into developing it could have been better spent elsewhere.

Most notably, there are two inventories for the gamer to utilize. The first consists of inventory items that Torin collects on his journey. The second is that of his irrepressible sidekick, Boogle, a creature somewhere between a cat and a Pokemon on steroids, with the alarming ability to morph into different shapes. As the game progresses, Boogle learns to morph into a greater number of objects, allowing a flexible and novel approach to challenges.

The backdrops to the game are beautifully detailed and generally a pleasure to encounter, with each world having its own distinct visual flavour, from the greenery of the third world, Pergola, to the desolate, lava filled landscapes of Asthenia. Regrettably, these realistic backgrounds are overlaid with Disney style characters and cartoon type animations, ill suited to such an environment. Although both components were strong individually, they seemed to be in discord when combined. On a positive note, the animations themselves are quite charming to watch, with Torin leaping and bounding with exhausting athleticism from one world to the next. 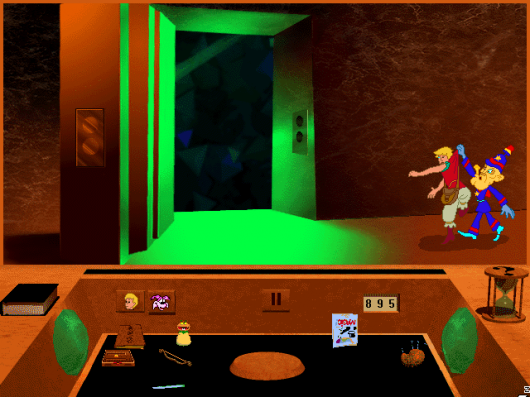 The music is generally well-suited, with each world having its own distinct themes. It is neither intrusive nor remarkable, except for the signature theme, which adds to the ambient feel of the cut scenes. The voice acting attained a similar level of "high-mediocre" though I am unsure of just how many times I could tolerate Boogle's incessant "Mugommphalon."

The puzzles in Torin's Passage are unusual in that they combine traditional inventory-based challenges with Myst-style sliding tile games and musical puzzles. With a gentle learning curve in the first world, a little logic and warped sense of humour will ensure your success and progression. Most challenges can be completed with little more than five minutes of serious consideration, though the online hint system is available for those having difficulties. This ingenious device was both a curse and a blessing. Costing the gamer points, the online hint system was similar in nature to the Universal Hint System (UHS) with each clue revealing progressively more information. Unfortunately, it's something of a curse for those lacking in will power—as I soon discovered! Initially setting it to "no hints" with a somewhat smug feeling of superiority, at times I was forced to surrender my dignity and make hints available anytime. However, not even this could aid me with the most tedious and unashamedly horrible part of the game, adventure gamers' pet hate—the nefarious maze puzzle. The fourth world, Asthenia, involves a truly abysmal example of a maze. Although outwardly simplistic to solve, so poorly thought-out was the challenge that the gamer has to click a few millimeters in front of Torin to navigate him. This equates to enough clicking to leave scores of gamers filing claims for repetitive strain injury. Worse still, when I finally reached the end of the maze, I discovered I had unwittingly left that all-essential inventory object behind. Perhaps this was one of those "hilarious" comic twists the box had promised? If so, I was suffering from acute sense of humour failure. As if to prove beyond any doubt their sadism, after a brief interlude, the game confronted me with a second maze. Perhaps it was just the lava, but I get the distinct impression that hell is something like Asthenia.

In contrast, the characters are very strong. Torin is particularly likeable, if not a little dense for an adventure gaming hero. Most of the secondary characters though two-dimensional are entertaining and memorably eccentric. Even Boggle, your "lovable" sidekick, about whom I first professed murderous intentions, thoroughly won me over by the end. The real letdown was the token love interest, Leenah. Having barely more than twenty lines of dialogue, she is reduced to a literary stereotype, making her scenes with Torin clumsy and unrealistic. 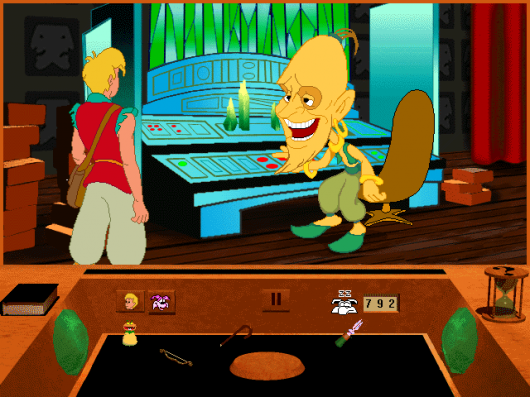 The plotline is traditional fairytale fare—every cliche is there, from the token damsel in distress to the evil sorcerer. Whilst perhaps charming to younger gamers, it lacked imagination with obvious plot twists that could be second-guessed from the opening credits. Torin's Passage entertained, but it failed to enthral.

Regrettably, there are several features within Torin's Passage that mar an otherwise likeable adventure. The humour, whilst occasionally entertaining is in places juvenile, and aimed at a younger audience— usually it just falls flat. Some jokes are recycled again and again, and even math-related humour makes an appearance. Certainly it will not be to everyone's taste. Furthermore, the entire world of Asthenia adds nothing to the plot, but is undisguised and truly horrible padding. In order to capture the family market, the game is in essence a light-hearted fairytale romp, though one which may fail to hold the attention of teens and adults weened on more suspenseful and involving gaming experiences. 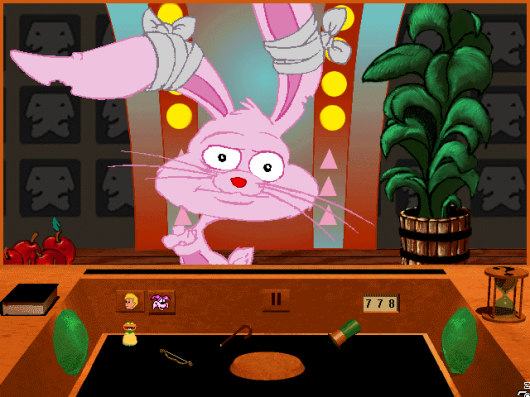 With regard to technical issues, running Torin's Passage in Windows 98 did cause a number of problems. The display had to be adjusted to 256 colours—not an unusual practice for older adventure games, but one causing problems under my system configurations. Most significantly the game had the tendency to crash on several occasions during cut scenes, causing total system lock-ups. Occurring at key dramatic moments, it was particularly irritating, and while not making the game intolerable to play, it detracted from the experience and severed any sense of immersion.

In conclusion, this game is one best left to the kids, or else a means for older adventurers to procrastinate whilst waiting for the next classic to materialize. It would be unfair to say I hated this game, and indeed it had many positive qualities, but lacking in imagination and humour it became bland and unoriginal. Despite a promising start, Torin's Passage never breaks through a barrier of mediocrity.

A promising fairy tale that just never breaks through the wall of mediocrity.

What our readers think of Torin’s Passage