Review for The Curse of Monkey Island 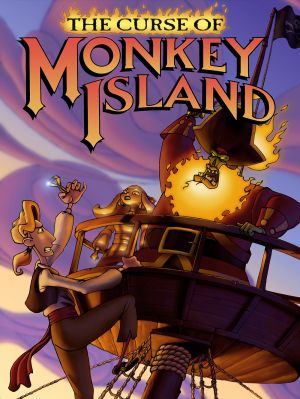 We get a small commission from any books sold.
Written by
Tamara Schembri — May 20, 2002

The Curse of Monkey Island is the third instalment of the popular Monkey Island comedy series. The saga follows the adventures of the oddly named Guybrush Threepwood, the wannabe pirate who can hold his breath for ten minutes. The story again relies on the character triangle of Guybrush, Elaine (the governor of three Caribbean islands) and the evil undead pirate LeChuck, Guybrush's arch-enemy. The Curse of Monkey Island begins with Guybrush Threepwood lost at sea. Soon though, he is captured and that is where the game kicks off. After escaping from captivity, he finally proposes to Elaine, his long-term love… with a cursed diamond ring, which turns Elaine into a gold statue. The rest of the game focuses on breaking the curse, and escaping from the pirate LeChuck so that they can marry.

Act One is ridiculously easy, but thankfully things get better later on. The game has a familiar point n click interface and the Monkey Island method of conversation, where you have a multiple choice of witty answers. As in all LucasArts adventure games, you cannot die, and this makes for unlimited exploration without the fear of making the wrong decision. The puzzles are also traditional LucasArts fare – no ‘use-the-switch-and-pull-the-lever’ puzzles here. They range from the obvious and common sense to the ingenious lateral thinking. As with most games, there are a few illogical puzzles, but these are few and far between. To make things even better, you can choose to play an easier version of the game, with fewer and less difficult puzzles.

The graphics and animation are flawless – just what one would expect from a LucasArts game. In a departure from Monkey Island 2, where the graphics were as realistic as was possible at the time, The Curse’s graphics are cartoony, as in Sam and Max, or Day of the Tentacle. This refusal to take itself seriously adds immensely to the game’s charm. Backgrounds are very detailed, and although cartoon-style, are somehow realistic. 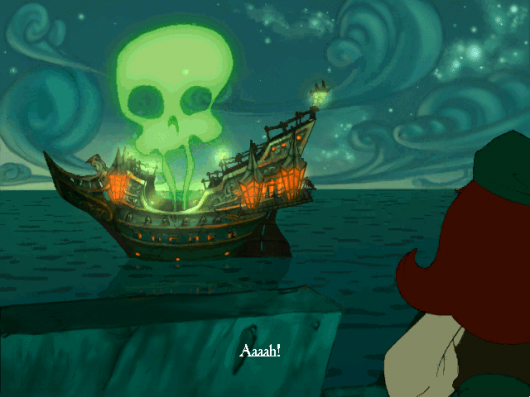 The characters, old and new, are all lovingly rendered in beautiful 2D. Monkey Island buffs will be thrilled at the return of Wally, the Voodoo Priestess, Stan and of course LeChuck himself. They serve to make a smooth transition from Monkey Island 2 to COMI. However, apart from Stan, these characters are criminally underdeveloped. Wally, for instance, is only seen in the beginning of the game, when he could have been so much more. The Voodoo Priestess is an important character in the first two Monkey Islands, but in The Curse, it is only really necessary to speak to her once. Again, her character could have done so much more.

There are also a plethora of new characters, such as Murray, the demonic talking skull, the barber pirates, Captain Rottingham (a new baddie!), Madame Xima and Dinghy Dog (reminiscent of Sam and Max).

The Monkey Island humour is here, along with the usual brilliant music, which is always relevant to what you are doing at the time. There is even different music for each character you talk to and the change is done so subtly that you hardly notice it. Your subconscious does though, and it adds greatly to the atmosphere of the game. The voices are done magnificently too. 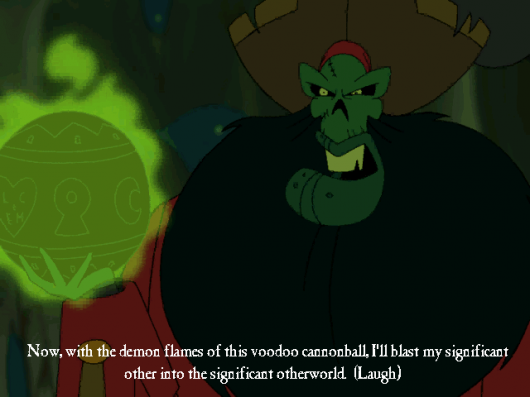 As in all games, along with the plot there are several sub-plots and in-jokes. Although the game can be finished in no time at all, the real fun lies in replaying it and talking to all the characters, doing things you normally wouldn’t, often with hilarious results. For example, your relationship with Murray, although not essential to the game, gives endless amusement.

Among the highlights of the game are the dying scenes (hilarious), Stan freed from the coffin (although you’d need to have played Monkey 2 to understand that) and the ship battles. The battles are an element of strategy not usually found in adventure games – a welcome relief.

However good the game is, it must be said that it is far too short, and the ending is a little rushed. Two days of gameplay is simply not enough for a modern adventure game. The length also affects the depth of gameplay. You simply do not have enough time to develop relationships with other characters, and get truly immersed in the game’s world. After its predecessor, this comes as a big letdown. Also, the ending is an anticlimax, leaving the player thinking he could have done so much more, if only the game’s programmers had let him. Minor quibbles, to be sure, for this is a fantastic game, but it’s the little details that make the game sparkle…and quite frankly, this game does not.

WHERE CAN I DOWNLOAD The Curse of Monkey Island

The Curse of Monkey Island is available at:

A great game, but let down by its brevity.

GAME INFO The Curse of Monkey Island is an adventure game by LucasArts released in 1997 for Mac and PC. It has a Comic cartoon style and is played in a Third-Person perspective.