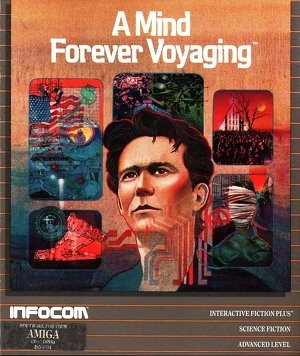 It’s 2031. The world is on the brink of chaos. In the United States, spiraling crime and unemployment rates, decayed school systems and massive government regulations have led to a lazy, contentious society. To reverse this critical situation, government and industry leaders have developed a Plan combining the economic freedom and strong moral values of the 1950’s with the technological advancements of the 21st century. As the world’s first conscious, intelligent computer, only you can visit places that have never been seen before. Only you can view the future. And only you know what must be done to save humanity.

This 1985 Infocom text classic may be dated in style, but its political undertones are more relevant and compelling than ever.

Walkthrough for A Mind Forever Voyaging

Screenshots for Mind Forever Voyaging, A » View all screenshots


No screenshots for A Mind Forever Voyaging available (yet).

Videos for A Mind Forever Voyaging » View all videos

No videos for A Mind Forever Voyaging available (yet)

What our readers think of A Mind Forever Voyaging

There haven't been any reader that reviewed A Mind Forever Voyaging yet. Please share your (short) verdict, a review or post your star rating!