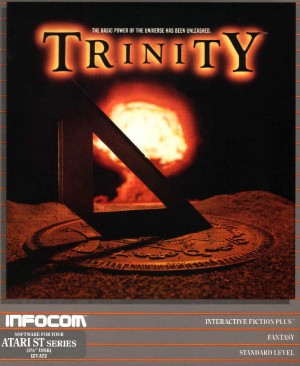 It’s the last day of your London vacation. Unfortunately, it’s also the first day of World War III. Only seconds remain before an H-bomb vaporizes the city… and you with it. Unless you escape to another time, another dimension. For every atomic explosion unlocks the door to a secret universe; a plane between fantasy and reality, filled with curious artifacts and governed by its own mischievous logic.

Trinity is available at:

Stuck in Trinity, or looking for the best way to proceed? Click below to view our walkthrough for Trinity and wonder no more!

Screenshots for Trinity » View all screenshots (10)

Videos for Trinity » View all videos

No videos for Trinity available (yet)

What our readers think of Trinity

There haven't been any reader that reviewed Trinity yet. Please share your (short) verdict, a review or post your star rating!

Trinity is an adventure game, released in 1986 by Infocom. Trinity has a style and uses a Text parser control scheme. Adventure Gamers have not yet published a review of Trinity, at this time the community has not provided a rating for Trinity.