Conspiracy! entered development in December of 2020 and released a month later, on Inauguration Day in the United States. It’s a game that, as per its marketing, aims to be an “uproarious, satirical comedy” which “takes you on a journey into the heart of the Deep State.” Regardless of where you live, if you’ve been online or looked at a TV recently then no setup or context should be needed to understand the outsized place conspiracy theorizing has come to occupy in American society circa 2021. Far too many people are opting out of reality in favor of labyrinthine fantasies, and given how serious the problem has become, perhaps you feel like you could use a good laugh just to take the edge off. Having finished Conspiracy! I think you’re unlikely to find it here. Its puzzles will engage your brain for an hour or so, but otherwise the game delivers a mostly limp parody with little to say about current events and even less apparent reason for trying to say it.

The story is set in the immediate present, and though it winkingly omits any real names it’s always obvious which public figures it’s referencing. “Fourteen days and still no concession,” says the opening voice-over, making it abundantly clear which unnamed president has tasked you with sifting through a set of classified files in the aftermath of a losing election. As the president’s lawyer, your job is to comb through the files and figure out the order in which the events they detail occurred. The goal, of course, is to find evidence of a conspiracy, in this case involving a quartet of rogue intelligence operatives called the “Four Agents,” though—as with such paranoid fantasies in the real world—the specifics of what it is they’ve supposedly been doing remains mostly unstated.

To do so you’re given audio files, newspaper clippings, journal entries, and hacked e-mails to go over; you’ll have to analyze them to correctly identify what month and year correspond to each of the twenty undeveloped Polaroids you have that represent links in the conspiratorial chain. Each photo bears a Sharpied-on description: “Operation Ulysses established,” “Disappearing the server,” “CMA founded,” and so on. Once you think you’ve figured out the chronology of a given event, you can select from a set of dates and drag your choice to the corresponding photo; with each five you correctly pin down you’ll receive additional clues. 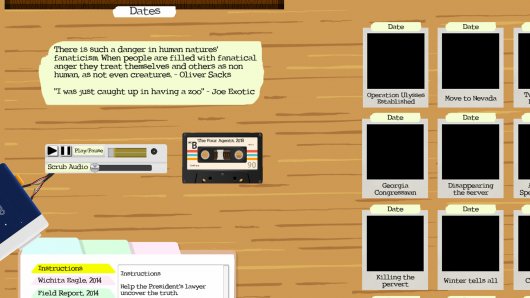 Solving these puzzles requires research, and not just within the game. The fictional timeline matches up with the real world’s, so that you’ll need your own calendar to follow up on many of the clues. Pieces of evidence you’ll examine offer hints at the general timeframe in which they were produced, but never complete dates, so that while an e-mail might mention Halloween is coming up, for instance, you won’t know which year it comes from. If, however, the sender laments that it’s going to fall on a Thursday instead of a weekend, you’ll have what you need to track down the year from your pool of dates.

Frequent oblique references to historical events, real-life sports matches, and geographic landmarks will help you to navigate the sea of information, but you’ll have to look them up yourself. In this way Conspiracy! does a good job of placing you into the fevered mindset of a conspiracy theorist, fixating on the tiniest details and following threads that often lead nowhere. Its research-based puzzles are the game’s greatest strength, and they force you to engage more actively with the material than you would if the answers were there to be found in the game itself. (Hopefully you have a smartphone nearby, because the game lacks any feature to facilitate external research outside of Alt-Tabbing back and forth.)

Everything takes place on a single screen, with your available evidence piled off to one side—written pieces on the bottom, audio files on top, with a tab to access the dates that need assigning—and the undeveloped Polaroids laid out in rows on the other. You won’t know if you’ve dated a photo correctly until you’ve gotten five right, at which point a short cutscene shows those images coming into focus. The pictures themselves are immaterial to the gameplay; they’re just there to distinguish solved photos from unsolved. Ominous, thrumming music buzzes in the background throughout, a fitting accompaniment to the kind of bleary-eyed work you’re doing. The audio files, representing clips from podcasts, news reports, and audiobooks, are fully voiced, and each actor does a good job of conveying their unseen character’s personality. 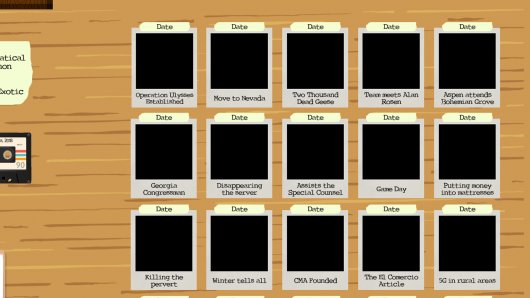 Gameplay-wise, Conspiracy! is working from a strong foundation, but it feels like a waste to introduce such an involved and engaging puzzle-solving mechanic and then to provide so little time to really dig into it. I finished the game in 45 minutes, and I’d be shocked if it actually took anyone the advertised 2-3 hours. The problem’s compounded by the fact that the game basically doesn’t have an ending; there’s a quick cutscene once you’ve placed all the dates correctly, but it’s a winking musical punchline that provides almost no resolution to the surprisingly complete story of rogue operatives and interagency conflict you’ve spent your time uncovering. The story in question doesn’t make a lot of sense when you look at it straight on, but that seems to be by design; it’s a paragon of logic when compared to some of the theories it’s meant to lampoon.

And that leads to one of the game’s biggest issues: modern conspiracy thinking has grown so overtly and cartoonishly detached from reality that Conspiracy!’s muted, “let the subject speak for itself” approach simply doesn’t allow for effective satire. The script offers little commentary on its subject matter except to present it and trust the audience to find it ridiculous, but all the points it includes as part of its fictional conspiracy—mattress stores being used to launder drug money, government officials leaking secrets through the internet, high-profile deaths having been secretly ordered by the Clintons, etc.—aren’t just parts of existing real-world conspiracy theories, they’re actually some of the least outré. A not-insignificant number of American voters earnestly believe that one party is controlled by Satan-worshiping, cannibalistic child molesters, and an elected official has blamed wildfires not on climate change but on lasers from space controlled by the Rothschilds. Secret meetings at Bohemian Grove seem almost quaint by comparison.

It feels hollow and lazy, at a time when enough people were so thoroughly duped into believing an election had been stolen that they attempted to attack their country’s seat of government, to simply point at such a notion and gently say, “It sure would be silly if that were real!” There’s a sizeable contingent of believers out there who have considered these ideas in a neutral environment and found them not absurd but captivating, and in that light it becomes not just misguided but foolhardy to think that simply gesturing toward them with a smirk is enough to demonstrate how ridiculous they are. For satire to work as intended it has to be pointed, unflinching and sober about its subject’s place in the real world, such that its targets might be forced to reconsider things they previously hadn’t questioned. By contrast, there’s nothing in Conspiracy! that dyed-in-the-wool true believers haven’t already heard, or that nonconspiracists haven’t worn themselves out arguing against. 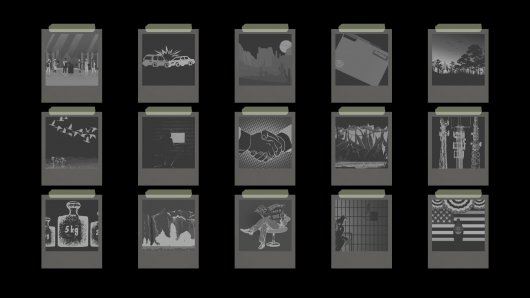 But ideology aside, the game just flat-out isn’t very funny. There aren’t many actual jokes here, with the promised “uproarious, satirical comedy” mostly taking the form of winking topical references that the audience is expected to recognize and subsequently laugh at—not because they’re genuinely funny, but because they’re familiar. Conspiracy! obliquely describes actual people without naming them outright, but their true identities are impossible to miss: “the powerful political couple,” “the pervert who died in prison,” etc. As with the various conspiracy theories it covers, the game doesn’t have much to say about any of these people except to mention the theories surrounding them and hope that that’s amusing enough on its own.

The unfortunate fact is that audiences in 2021 have spent years listening to an exhaustive litany of jokes about these people and topics from just about every conceivable angle. At this point, the kind of references on display here aren’t just unfunny but tiresome, and trying to squeeze a few more laughs from them feels downright obnoxious in a product that launched a few weeks after the aforementioned capitol attack. Even setting that aside, the game dates itself so thoroughly that it’s likely to feel irrelevant in a matter of months. Will future audiences have any appetite for such timebound material? Will they even understand it? And that’s only for American players; people in other countries might not understand the finer details even now.

A game that shoots for the stars and misses will always be more interesting than one that aims low and hits its mark; the worst thing a player can say when the credits roll isn’t “I hated it” but “So what?” Conspiracy! has promising puzzle design and impressive production values for its quick development time, but it seems content to retread old ground in its approach to the subject matter, to the point that I felt pretty much the same pressing “Quit” as I had choosing “New Game.” I never felt like it knew what it wanted to say that hasn’t been said ad nauseam a hundred other places, or even what motivated it to say this much. My overwhelming impression was that the developer rushed to make it because, good or bad, it would only be relevant during a brief window of time. Given a funnier, more insightful script and room to fully explore its gameplay mechanics, Conspiracy! might have met the moment more memorably. As is, it feels slight and stale, and I doubt I or anyone else will remember much about it in the future.

Conspiracy! is an extremely short, moderately diverting research-based brain-teaser whose muddled attempts to satirically comment on current events never amount to much of substance.

What our readers think of Conspiracy!