The Procession to Calvary review

Joe Richardson’s The Procession to Calvary is the follow-up to the indie UK developer’s excellent Four Last Things. Like its predecessor, this game is a farcical point-and-click adventure set in a fictional take on the Middle Ages. For the most part the sequel is a worthy follow-up, carrying over Richardson’s signature (and at times sacrilegious) sense of humor, as well as the unique graphical style using collages of old paintings to create each scene, accompanied by famous musical compositions. Puzzles are similarly fun and often feature silly solutions that fit right in to the overall atmosphere. Experienced adventurers will likely find any real challenge lacking, but this is largely forgivable considering that the gameplay is generally secondary to the comedy.

The action begins with a sword-wielding warrior hacking and slashing her way through enemy soldiers, before being stopped in her tracks and informed that her days of murdering and mayhem are over. The holy war between Immortal John and Heavenly Peter – characters that will be familiar to players of the first game – has been won, and our heroine is now forbidden from taking any more lives. Discovering a loophole in this edict, however, she sets off to kill one last target, thus setting up the events that make up the rest of the game.

Procession to Calvary succeeds at crafting a game that feels like a Monty Python sketch, and in some ways it is improved over the previous game in this regard (particularly in the areas of atmosphere and dialog), and in other ways falling short. The good news is that most of the jokes, situations, and sarcastic zingers peppering the conversations between the protagonist and NPCs are quite funny, and are occasionally surprising in ways that heighten their comedic effect. Some jokes feel forced, or simply don’t land in their delivery, though these are few and far between. Meta-humor appears several times throughout the game as subtle genre send-ups and a running joke. The way the latter interrupts the entire flow of the game struck me as quite Pythonesque, though the way it annoyingly belabors its comedic point borders on overstaying its welcome, intentionally or not. It also bears mentioning that Christianity is the butt of a rather prominent series of gags, so those who find such things offensive should steer clear. 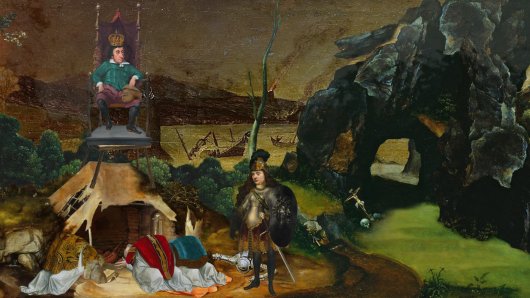 Puzzles are mainly of the inventory type, such as giving the correct item to a character or figuring out how to retrieve something that cannot be reached in a straightforward manner. There are a few obstacles that break out of the inventory-based mold, however, with the need to select the appropriate sequence of dialog options or to work out a riddle in order to progress. In general, the puzzles are fun to solve, and while a given solution may be unorthodox, such as recruiting a certain creature to open a window for you, the underlying logic usually makes sense in the bizarre world of Procession to Calvary. Though my progress was stopped occasionally until I understood what I needed to do, I didn’t find any task especially challenging. Sometimes this is due to a limited number of options that would even make sense under the circumstances, but other times it is simply obvious what needs to be done, based on some given clue or prior observation made along the way. The relative ease wasn’t problematic for me, but those looking for a real brain-bending experience won’t find that here.

The puzzles themselves might be somewhat standard fare, but the variety of tasks motivating them fit very well with the whimsical nature of the adventure. Such goals include trying to help a well-known “street magician” (ahem) out of a particularly rough spot, winning a medieval-era talent show, and assisting a cadre of demons in appeasing the Devil, to name but a few. On top of that, oftentimes a task will be resolved in an unexpected way that is worth a laugh, while still fitting absurdly into the logic of the situation, such as getting an unfortunate soul to throw up in order to retrieve an item they possess.

The mouse-based controls are basically identical to Four Last Things, in that clicking on interactive areas of the screen brings up a floating trio of icons for “look,” “pick-up,” and “talk,” although drawing your sword with the right mouse button replaces “look” with a glinting sword tip and the associated interaction. Likewise, pointing hand-shaped cursors show the way to navigate between scenes. The savegame situation is a little different this time around, with an automatic save being augmented by four manual save slots. This is appreciated, although the lack of thumbnail, naming, or date/time information means that the function is still limited somewhat. Another new feature is the notable inclusion of two alternate endings, one of which benefits from being able to record your progress manually near the end of the game. 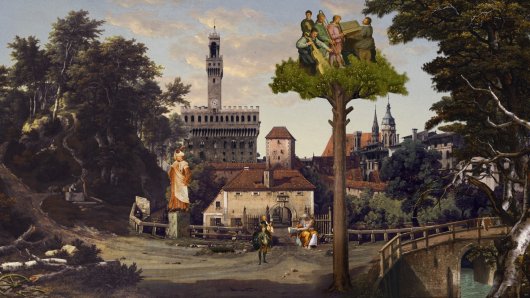 Graphically, The Procession to Calvary is basically identical in style to its predecessor, using mixed-and-matched elements from classic paintings of centuries past to craft entirely new scenes. The artwork utilized is quite diverse and, coupled with the various animations such as dancing bards and rippling water added to spice things up, lends the experience a unique and enjoyable visual quality that belies its limited budget. It is probably worth cautioning that certain events might be disturbing to some, such as heads being sliced off during battle and a rather gruesome scene in which a group of crucified individuals writhe and scream continuously. The latter is played for laughs in a way that diminishes its hideous nature (a fact that could itself be considered offensive), but given that several visits are required to complete various puzzles, players will spend a fair bit of time being exposed to it.

A number of different locales are represented, such as the vaulting heights of a basilica, the dank confines of a witch’s cave, quaint city scenes, lush interiors, and even the eponymous Calvary itself. As with last time, there is an in-game gallery where the paintings used can be viewed in their original form. Comical descriptions appear when you hover the cursor above a piece, such as “A Painting of Some Skinny Dippers Having an Argy-Bargy,” describing Paul Bril’s Diana and Callisto, among other chuckle-worthy gibes. 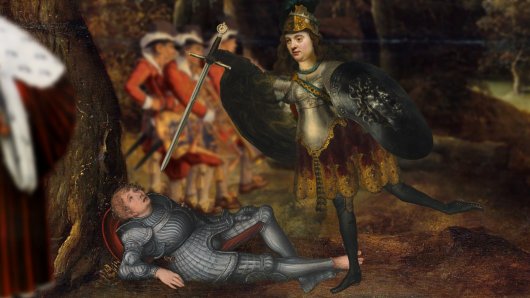 The musical presentation is also similar, using public domain recordings of classical music of various eras, played by a different musician or ensemble in each scene. While Four Last Things suffered from the occasional repetitive track, The Procession to Calvary seems to mostly avoid this pitfall, though whether this is because I enjoyed the chosen tracks more or because a more varied collection of musical styles is featured, or both, I cannot be sure. In any case, the score stands as a highlight of my time with the game, and should be a treat for fans of the classical genre. Sound effects are also effective, establishing an appropriate mood for their respective scenes, from the footsteps of the main character and metallic swipes of her sword, to claps of thunder and shouts of dismay from certain characters. As with its predecessor, there is no voice acting (aside from the aforementioned screaming and shouting, of course).

Ultimately, the 4-5 hours it takes to finish The Procession to Calvary is time well-spent. The Monty Python-style humor and wit definitely shine through once again, with silliness and absurdism the order of the day. Conversations can take zany and sarcastic turns, and the circumstances you find yourself in along the way are appropriately bizarre. Not all the jokes land, but the overall tone of the game is unchanged from its predecessor. The puzzles are fun affairs, though most experienced players probably won’t find them seriously challenging. The presentation is, once again, a triumph of cost-saving ingenuity, with public domain paintings and classical compositions combining to form the creative sights and ambiance of each location. Fans of Four Last Things will welcome the callbacks and certain references to the original, but each title stands on its own, so that even newcomers can pick up the sequel without worrying about missing anything important. Both games are incredibly similar, but for those looking to immerse themselves in Joe Richardson’s unique blend of humor and gamecraft, that’s not a bad thing at all.

With its Monty Python-inspired silliness, cleverly recycled art and music, plenty of fun objectives and appropriately zany tasks to complete, The Procession to Calvary gives fans of Four Last Things more of what made the first game great.

What our readers think of The Procession to Calvary