We get a small commission from any books sold.
All Bitmap Books
Written by
Cathlyn Vania — July 2, 2018

“Have you ever wondered what the world would look like if you were the size of an ant?” asks the narrator as the camera swoops down through an open grassy field and zooms straight into the underground depths of an anthill. With its gorgeous photorealistic macroworld, quirky characters, and witty little story, AntVentor, the first installment of LoopyMood’s planned “ANTrilogy” is in many ways a promising start to a delightful adventure series. However, there’s still plenty of room for improvement as the gameplay falls well short of the outstanding visuals with a number of detrimental issues that hinder this debut title from reaching its full potential.

Our hero is Florantine, a worker ant living in his small chamber who hopes one day to receive his wings from the queen, fly out of the colony and see the world. Being the crafty inventor that he is, Florantine has an automated machine (made from a tomato soup can) that does all the hard labor for him, turning wood into chips while he sleeps and dreams of his future trip around the globe. But thanks to you, the unseen player, a click of your pointer accidentally breaks the machine and now Florantine must leave the comfort of his home to find a replacement part to repair it.

While the ants’ subterranean lair is suitably earthy, aboveground the buzzing of insects and distant chirps of birds can be heard through the towering blades of grass of this oversized wilderness. A massive spider sits atop its dewy web, and pads of moss nestle in the curves of nearby branches, while giant menacing crows stand in the way of Florantine’s progress. The level of detail in these natural close-up environments is almost mind-blowing, yet the more cartoony characters (reminding me a bit of the gang from Courage the Cowardly Dog) still manage to fuse nicely with the realistic surroundings. Among the fellow insect critters you’ll encounter in your travels are an old flea lady with the hiccups, who lives inside a bottle of human sleeping pills with her pug-faced (yes, a cute, googly-eyed pup) caterpillar, and a macho security guard with crab pincers as a weapon. 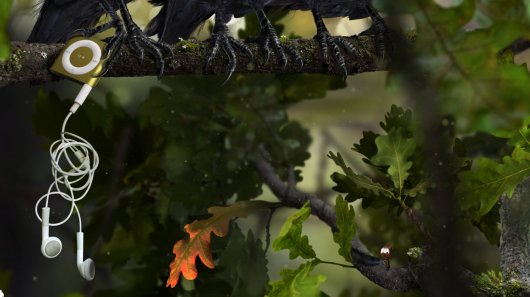 The star of the game is Florantine, however, and I was immediately charmed by his ability to break the fourth wall, pointing an accusing finger towards me through the screen, mad at me for breaking his invention. Such subtle interactions between protagonist and player occur other times during the journey, such as Florantine looking at you when he’s confused or shaking his head in your direction when an action is not possible. The little ant is clearly a very expressive character, and since the game has no dialog at all beyond the opening cinematic, this trait serves as an important narrative tool alongside the animated thought bubbles and visual hints given throughout the game.

Adding another layer of charm to the adventure is the subtle jazzy contrabass score in the background that enhances the suspense from time to time, especially when Florantine is sneaking up on someone or is scared of something. It also serves as welcome musical ambience to accompany players while solving a puzzle or simply exploring the lush landscapes.

The point-and-click controls are pretty straightforward, but pictogram tutorials at the beginning demonstrate how to move around and combine objects. An inventory bar is hidden at the top of the screen, which slides out when your pointer hovers over the area, so essentially what you see on screen most of the time is a perfect frame of picturesque environments. Most puzzle solutions are a matter of combining objects, and hints are provided by right-clicking Florantine. 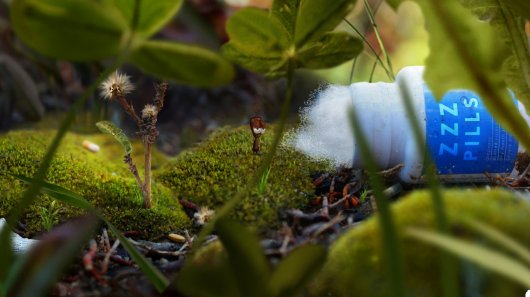 As simple as the mechanics sound, what started out as a fairly laidback, self-contained experience soon turned into a fairly open-world adventure with a series of rapid trial-and-error experimentation as I struggled both to find the objects I needed and figure out the correct combinations for each scenario. Even when I found the right item, often times I was left clueless (quite literally) and ended up searching around, clicking and exhaustively trying everything until Florantine popped a thought bubble or I right-clicked on him to get a hint, a feature that comes with a three-minute cooldown period between uses. In my two hours spent playing AntVentor, the hints became an essential part of the experience in allowing me to progress.

Hints sometimes show an exact image of the object needed next, which would usually lead me on a scavenger hunt to find, for example, a certain-shaped twig or a particular tiny pebble in highly detailed environments filled with similar twigs and pebbles, making them pretty hard to spot. The photorealistic scenery actually makes it extra challenging to distinguish interactive objects from inanimate background, as they’re blended a little too well into each scene and are detectable mainly by the smart cursor changing shape over them, requiring you to keep your eyes peeled to avoid missing any of them. Early on, it’s hard even to know where traversable paths might be, as there aren’t always clear indicators offering direction and you can move both vertically and horizontally as the screens scroll with you.

Along the way, there is a distinct lack of intuitiveness and flow for overcoming obstacles, or even to know what to do next. Objectives are occasionally implied organically, but mostly rely on Florantine’s thought bubbles that only sporadically appear. Unused items were piling up in my inventory for the longest time, and finding a match for them led to many desperate attempts, partly due to the distinct lack of valuable feedback. Attempting to interact with certain hotspots too soon or with the wrong item yields only a vague negative response from the protagonist, which occasionally tricked me into thinking that nothing could be done. In a story without words, a more helpful integrated clue system would have helped prevent a fair bit of confusion. 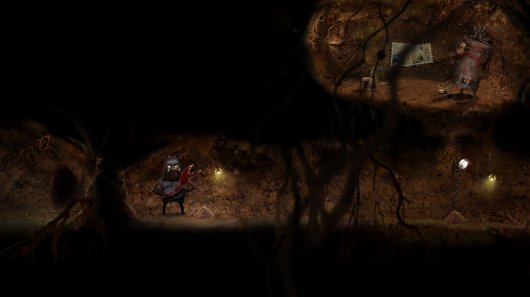 Compounding the problem is that though the animations are fluid and entertaining, Florantine’s movement as an avatar is painfully slow, which is especially frustrating when going back and forth between locations. There’s an option to make him move faster in places by left-clicking twice, but even so it is still somewhat tedious, not to mention the number of times the protagonist clumsily trips and falls on his face as a part of an automated animation sequence. I can appreciate the desire to represent a tiny creature stumbling its way through a land of giants, but what is cute the first time isn’t nearly as effective after that, adding to an already plodding pace that does not feel nearly as enjoyable as it could.

For such a short game, having to struggle through most of the puzzles made this seemingly breezy little experience feel more like a chore to complete at times. Thankfully, its abundant visual charm with occasional touches of whimsy and a simple yet refreshing story manage to lift AntVentor above its frustrations, and at least begin to build a unique identity for the series. I’m still very much intrigued by what’s to come in Florantine’s next adventure, especially after the surprise teaser at the end. This is a game that’s clearly been crafted with great personal care and attention to detail, so I can’t wait to see what the sequel will bring, but with sincere hope that the uneven gameplay issues are addressed the next time around.

Consistent enjoyment of AntVentor is hindered by its gameplay frustrations, but its charming main character and gorgeous visual design make for an interesting first stepping stone for the rest of the trilogy.

GAME INFO AntVentor is an adventure game by LoopyMood released in 2018 for Mac, PC and Linux. It has a Photographic style, presented in 2D or 2.5D and is played in a Third-Person perspective.