While it does not directly advertise itself as the first chapter in an intended series, the fact that Helsinki Noir’s Black Island debuted on PC for an ultra-budget retail price probably should have been my first clue. I can’t think of a game more deserving of its low starting price point than the indie Finnish studio’s debut title, not because it’s bad, but because it is little more than a half-hour prologue of a mildly intriguing game dressed up with some bizarrely appealing old-school FMV interludes.

Originally released for mobile platforms, Black Island is a classic first-person slideshow exploration game in the tradition of Myst. The game’s opening sequence is an extremely grim thematic introduction to the prison of mankind’s “black ruthless mind” and the notion of an ideal utopian society in which we can use science to just wipe away painful memories and nightmares. I’m pretty sure that’s what it’s about, at least, since the game labors to be more confusing than clear in the service of dark suspense. This brief introduction then finds our character stranded on a small island, for no apparent reason at all and with no real memory of why he got there, but with a constructed tent and evidence of a recent campfire nearby.

The next twenty minutes involve exploring the five main navigable locations via the game’s fast-travel map, gathering a few standard island-exploration inventory items (knife, screwdriver, flashlight, keys, etc.) and using them to gather more. You won’t have to strain too much to figure out how to proceed as the number of items are limited and they are generally very apparent against the backgrounds. However, there are a couple notable exceptions—a small key on the ground, for example—where the game’s lack of any hotspot indicator can be quite frustrating. It certainly would have been nice for the cursor to at least change when it moves over something that can be interacted with. 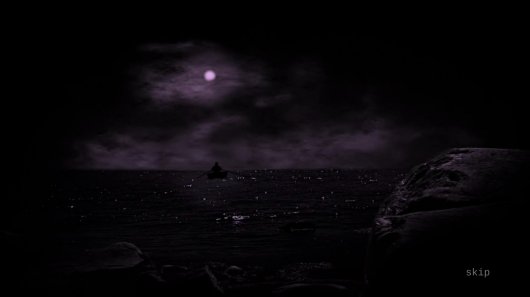 Once you find the items you need, you won’t have much trouble figuring out their use or their required combinations. Black Island really loves its locked doors; there are no fewer than five in this short game. Two of these aren’t key-driven; they are opened through puzzles, one of which is a multi-step algebra challenge that is one of only two interesting non-inventory puzzles to be found. There’s another locked door behind a combination lock, and the only item to be found behind it is… the key to another door. The final inventory obstacle is perhaps the most creative solution to a puzzle, but also the most ludicrous given the likely consequences of performing such an action. The last thing you’ll do before the epilogue is complete a horizontal four-button pattern game of Simon which, if you’re playing on a widescreen PC monitor, can really strain the eyes when the patterns start speeding up, and would be better suited for a mobile device instead. 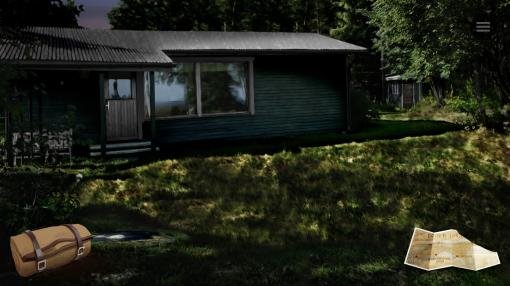 The static backgrounds are serviceable, but nothing in the serene woodland island settings is particularly beautiful or picturesque compared to a game like Return to Mysterious Island. There are a few indoor scenes, exploring an abandoned shed or a once-inhabited cottage, that are sparse on real detail. The English-accented protagonist does a good job of providing some accompanying commentary to what is otherwise an entirely solitary experience, but there is no music, other than that provided by an in-game radio during one scene, and only a few inconsequential sound effects. 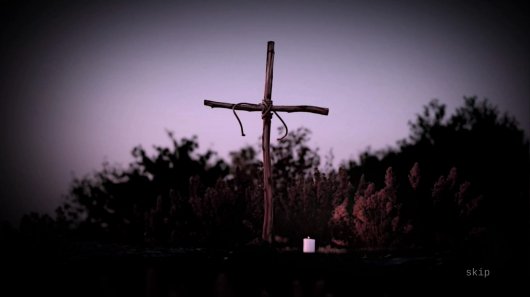 However, Black Island does bring back a long-underused part of adventure gaming’s history that is near and dear to my heart: really weird full motion video. The game’s FMV interludes are from the perspective of a man who can’t remember anything and is slowly being attacked by the evil deeds of his own past. The live-action video is therefore suitably bizarre and abstract, with quick cuts to strange images like people digging graves, young girls in white dresses dancing backwards, and assorted people who just generally appear to be losing their minds. Only in the final extended epilogue movie does the story start to offer any clarity. It would hardly be fair for me to spoil that, but even then there is a lot of jumbled strangeness until the final fade to black and the ominous voice-over, “My God… what have I done?” Good question—based on the information presented to me, I truly have no idea what I’ve just accomplished.

What I can say with certainty is that this game is a lot more about dark style, almost with some psychological horror elements, than any real narrative depth. The story seems like such an afterthought, and ends up creating more confusion than actual intrigue, that the focus is clearly meant to be on the darker elements: the mysterious ghostly visions that keep popping up, a female who appears to be meaningful to the protagonist and may or may not have experienced a tragedy, and some pretty strenuous suspense writing along the lines of “Shadows draw pictures of nightmares on the walls.” This grim style is such a contradiction of the peaceful, outdoor atmosphere of a first-person island exploration game that it would at least be interesting to find out where it goes—making it all the more unfortunate to see the game end so very, very fast, without even enough for a single satisfying playthrough.

It’s not as though the developers are attempting to pull the wool over people’s eyes here to believe this is something epic. The list of Black Island’s features includes “several puzzles” and “four videos which unfold the story,” both of which are true and both of which should help drive home that this isn’t even really a first chapter—it’s a true prologue, almost a proof of concept, that leaves every question it asks thoroughly unanswered. I am mildly intrigued by the story because it seems to have the potential to get a whole lot darker in a hurry, but with only a general “we plan to release sequels” statement in the release notes, I would be nervous about getting too involved in what might become a compelling story until there is a little more certainty that we will someday be led to an answer of what, exactly, it is that we’ve done.

What our readers think of Black Island