Originally released in Germany in 2010, Deck13’s Black Sails: The Ghost Ship finally gets an English release five years later. Inspired by the fascinating true story of the Mary Celeste, a ship that went missing in 1872 and was later found abandoned, with none of the crew or passengers ever seen again, Black Sails takes this tale of mystery and adds an unsettling and supernatural element to it. But does it warrant the long wait? Yes and no. A solid game with a confined setting and disappointingly poor localization after all this time, Black Sails should be worth a whirl thanks largely to its creepy atmosphere and dual intertwining stories.

In its hand-drawn introductory cutscene, the game starts off with the wreck of a passenger ship in a severe storm somewhere in the Atlantic. Two survivors, Anna and Lex, are able to scramble aboard a seemingly abandoned ship they encounter out in the middle of the ocean. At first they’re just happy they didn’t drown, but elation quickly turns to trepidation when they realize that the ship hides some dark and possibly supernatural secrets. From ghostly apparitions and hallucinations to the realization that the ship is inexplicably locked on its course, Anna and Lex get drawn into a subtle tale of terror.

The entire adventure is confined to the ship, and the plot is slow at the beginning. I didn’t feel much of a connection to Anna or Lex, who started off whiny and disagreeable, respectively. However, the eventual introduction of a second story, this one involving a small girl named Fiona, who was captured and is being held prisoner on the same ship, provides an excellent contrast and has much greater emotional impact, even serving to increase my investment in Anna and Lex’s predicament. The way the two plots come together is really the denouement of the whole piece, so there’s not much I can offer without spoiling the whole thing. However, they do tie together nicely, other than leaving one major question left unanswered when the credits roll. 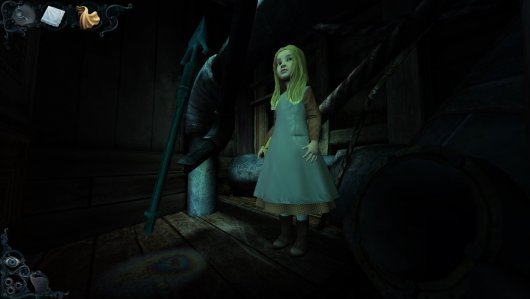 The 3D artwork is good, but the fact that the game is now five years old really shows at points. The backgrounds aren’t as detailed as they could be, and the textures not as crisp. Fortunately, there are lots of little details to discover all over the ship, from travel souvenirs to knick-knacks in the Captain’s quarters, as well as a view of the perpetual ocean motion through windows, which is a definite plus. The lighting could stand to be improved, as I felt like I was just clicking on black spaces at times, not a corner swathed in shadow, but the dark color palette and frequent blue tint are both excellent aesthetic choices for a game taking place entirely below deck, making the setting seem really eerie. Anna and Lex’s designs are good, and their movement animation is smooth and clean. The only issue is that their mouths don’t sync up with the dialogue, as they were originally matched with German voices.

The English voice acting – essentially the reason we waited all this time to get the game – is mediocre at best, though not so terrible that I ever felt like putting the game down to give my ears a break. Thankfully, you spend most of your time walking around the ship by yourself as Anna, so there isn’t much dialogue beyond her comments on what she sees. It helps that Anna’s voice actor is moderately better than Lex’s, but both performances actually improve slightly as the game goes on. Fiona and her companions from the side story also have passable voice-overs, but again, nothing spectacular. One area where more recordings would have been appreciated, however, are the notes and diary entries discovered around the ship. The font used is incredibly difficult to decipher, and a vocal narration from Anna would have been much appreciated. This feature was included in the original German release, along with an introductory monologue by Anna as the ship sank, which has also been abandoned here with no explanation.

Fortunately, what the game lacks in quality voice acting is more than made up for by the music. The background score is excellent, and establishes the mood far better than the setting itself does. Orchestral and creepy, it punctuates every dramatic moment and makes the ship feel more abandoned than silence alone could have. Sound effects also help set the atmosphere, particularly the eerie wind and creaking floorboards. There are a lot of games out there that could take their audio cues from Black Sails as to how to create an all-pervading aura of suspense. 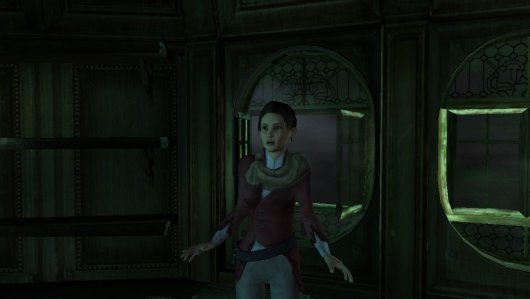 The mouse controls are easy to get used to: you click to look at, interact with, or pick something up, and there’s a simple tutorial for how to use the on-screen inventory. There is a button that highlights all interactive hotspots on the screen, which is extremely useful if not essential, because some of the tools to pick up are so fiddly and small that you’d never find them otherwise. Even the hotspot highlighter can be problematic at times, because it will occasionally miss things at certain angles. Conversation choices can affect the tone of your interactions with Lex, but none of them seemed to have much impact on the game until the very last scene.

Other than the voice acting, the only real drawback of the game is the horrific camera system. You’re never in control of the camera direction or angle; instead it automatically adjusts to follow you as you walk around the ship. While that’s great in theory, the game can’t always accurately predict what you’re trying to look at, and in some cases flatly refuses to let you see certain perspectives. There’s also a number of awkwardly-tilted overhead views, and the swinging of the camera while you’re walking makes it easy to get confused as to which direction you’re going, leading to some needless backtrack clicking when you realized you’ve walked down the wrong corridor. 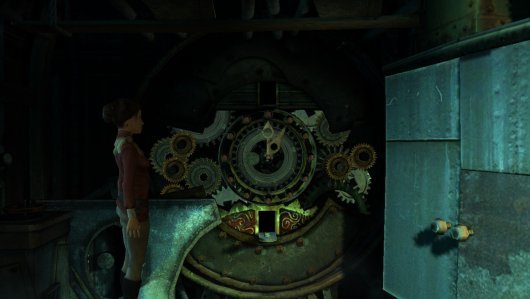 All of the puzzles in Black Sails are inventory-based, so there isn’t much variety. Most solutions are easy to figure out, but quite a few hinge on difficult-to-find objects, which makes it tricky. The logic behind the puzzles is also somewhat difficult to get into, occasionally forcing you to go around obvious solutions in favor of more elaborate ones. This could be due to my love of brute force and crowbars as solution tools, as opposed to something rather convoluted and finicky. Even the more challenging puzzles are easy enough to figure out through trial and error, as there are only so many objects you can use to achieve your goals. However, there is one puzzle involving mapping out a shipping route that forced me to consult a walkthrough, and even after completing the puzzle I still have no idea how the solution could be derived from the clues provided.

Overall, the game takes about 5-6 hours to complete, and it’s easier to play it in one sitting if possible so you don’t forget where everything around the boat is located. While Black Sails might not be the next big horror craze, if you’re up for a spooky mystery and don’t mind some mediocre dubbing and wonky camera angles, it’s generally worth the voyage for its amazing soundtrack and intertwining plot intrigue.

The haunting nautical adventure from Deck13 hasn’t benefited at all from its long-delayed localization, but it’s worth a whirl for spooky game enthusiasts.

GAME INFO Black Sails: The Ghost Ship is an adventure game by Deck13 released in 2015 for PC. It has a Illustrated realism style and is played in a Third-Person perspective.