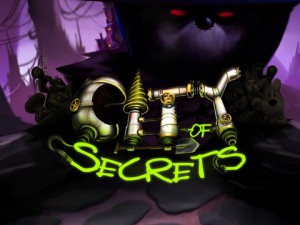 I’ve been playing a lot of iOS adventures over the past year. The nature of the iOS revolution is that many of these games are cheap—and very forgettable. When I completed City of Secrets, a traditional adventure that was originally an iOS exclusive and since released on PC, I knew it was not a game I was going to forget very soon—and when I reflect back on it later, I’ll remember it for exactly what it is: a very strange game. Unfortunately, often not in a positive way.

Created by Polish developer aideMMedia (a studio name worthy of praise for a palindrome-lover such as myself) in the grand tradition of Inherit the Earth and the Redwall novels, City of Secrets is set in a world of animals, where various species exhibit human traits and are usually aligned with good or evil. In this case, our two heroes are Moles the mole and Rex the dog. While enjoying some leisurely ice fishing outside, the two stumble onto a mysterious underground city of moles, the city of Poco Pane. Rex ends up in jail and Moles undertakes the task of breaking him out.

There’s a lot more than a simple prison break to the story though—there’s a full-fledged underground rebellion rising up in this city against the mayor, who has his share of secrets to be unmasked. Joining the revolt puts our heroes on the path to defeating the rats and helping the resistance accomplish its ultimate purpose of restoring the proper ruler of the city. It's an ambitious task that involves such things as building a unique bait device, traversing the colorful and hideous innards of a snake and his musical intestines, plus a bit of old-fashioned detective work. 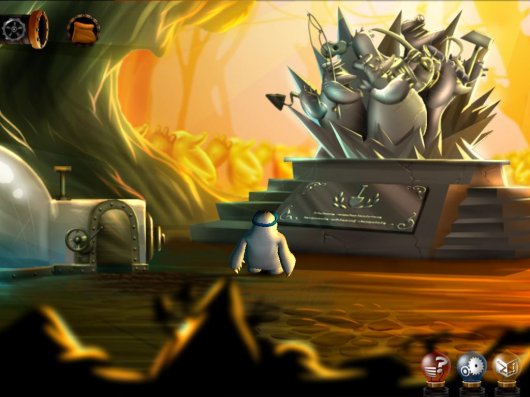 Unlike the aforementioned animal tales, City of Secrets is a comedy adventure, and an overzealous comedy at that. It is in the writing, both the construction of the story and the dialogue itself, that the game’s strangeness shines through. The story synopsis doesn’t even scratch the surface of how odd every element of the tale feels and how unusual every new twist of the narrative is. And even knowing that wouldn’t give you any hint as to how utterly bizarre the actual writing is.

Some of this must be attributed to translation—Eastern European developers don’t always have the easiest time getting their writing to properly come across in English. But the humor in the game, which is nearly suffocating as the developers are not content to let a line go by without some stab at a laugh, often seems destined to fall flat in any language. I’m not an expert in cultural differences in comedy—and I have never watched an episode of Black Adder—but the humor in this game felt decidedly British to me with its extreme droll sarcasm, similar to what you’d expect from the weaker parts of a Discworld game.

The game’s high point is its gorgeous visuals—this is without question the best-looking adventure game produced to date for iOS, by quite a margin. The hi-res graphics are brightly colored and impressively detailed, often with multiple layers of background detail and constant unique visual embellishments. The character animation is also exceptional, and the game makes consistently excellent use of shadows and lighting effects. The art design, with its odd perspectives and strangely curved buildings and structures, is far more successful than the dialogue in conveying the strange personality of the game. Simply looking at a few screenshots will undoubtedly provide the strongest motivation possible to try the game out, and it is a treat to see. 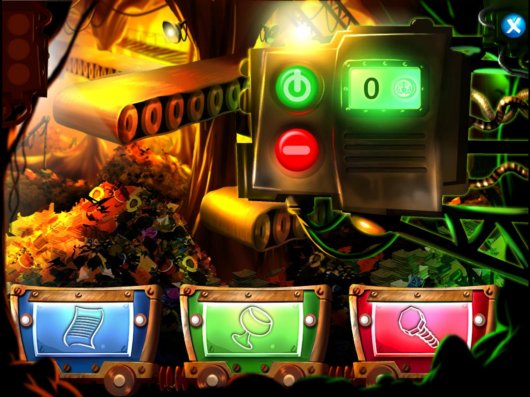 Being absorbed by all the strangeness will pass the time until the puzzles come into play—and this is where the game falls maddeningly flat. The inventory puzzles are often confusing and overwhelming. One puzzle requires gathering almost twenty inventory items before assembling them. Here the art style actually does the puzzles a disservice, as the content of the backgrounds often makes it unclear where to use a specific item. There are also two instances of large puzzle activities that boast confoundingly bad design, at least on the iPhone/iPod Touch. One is a minigame requiring tilting the device to guide trash on multiple conveyor belts into the correct receptacle. I’m fine with tilt-based games, but this one is designed in a way that makes it physically impossible to avoid failure unless you catch a fortunate sequence of trash—truly one of the most frustrating experiences in recent memory. The other is a variation on a sliding block puzzle, with the added complication of not having a clear final pattern and some unwieldy and unresponsive touch control. These brutally obnoxious experiences are textbook examples of a young developer lacking the correct sense of challenge. Thankfully, both puzzles are significantly less demoralizing with mouse-based PC controls.

Getting through these types of challenges is time-consuming, but the game does come with a “hint” system. How I define hint does not resemble what this game actually offers, however, which is a built-in, step-by-step walkthrough. I really like hint systems but felt a little cheated when a request for a hint yielded a specific instruction of where to go and what to give to who. Worse still, the next step of the walkthrough pops up each time you hit the hotspot detector, and since you’ll probably make use of the highlighter regularly, be sure to turn the hints off early if you don’t want your hand held. If you are steadfastly against hints, you could easily have a 6-8 hour adventure in front of you; the solution-directing nature of the hints will obviously dramatically reduce that.

This in-game walkthrough itself occasionally spotlights the bizarre and sometimes mean-spirited humor, as well as showing an annoying tendency to break the fourth wall. An excruciating example is a situation where a hidden light switch in a dark room must be tapped to bring light. The hint is “Find the lightswitch. Yes, we realize that means tapping all over the screen.” Oh, good, you’re aware of your poor design decision. Well, that certainly makes me feel better! I could also do without the constant reference to “the player” and “the designer” and similar hyper-self-awareness; it’s good for an occasional laugh but must be used in much better moderation than this. 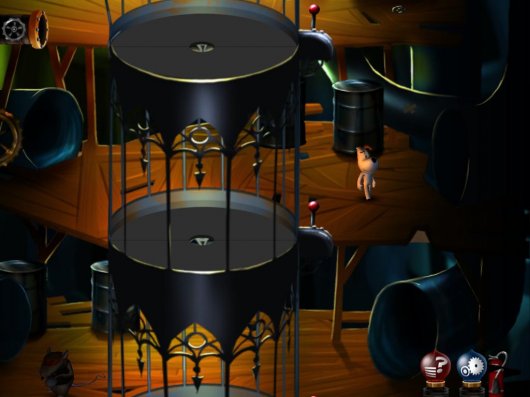 The soundtrack stands out as a strength, as each location has a unique musical theme and most of them are decent variations on light jazz, with some occasional reggae or funk influences, often with a sinister element. The dump that houses the entrance to resistance headquarters features a dark and moody sax-driven number that sounds fitting for a dimly-lit private eye mystery; however, upon entering the hideout you’re treated to a bright, finger-snapping jazz tune. Elsewhere, the market’s upbeat polka-flavored background features brilliant toe-tapping percussion and a fittingly strange trombone solo in addition to a layer of ambient voices, a nice feature to increase the realism of the setting. The voice acting is generally okay, particularly the excellent work for Moles, whose gruff British accent sounds committed and accurate. Some voices, especially the Narrator, sound like half-hearted cold reads, but these represent the minority of dialogue, as most characters come and go from the storyline rather quickly; even Rex is absent for most of the game.

The PC version, released as a budget adventure a few months after its mobile counterpart, is a near-direct conversion of the iOS game. The graphics, stretched to the size of a computer monitor, are nowhere near as impressive, but playing this game on the PC with mouse precision mitigates some of the frustration from tapping puzzles on a small screen with oversized fingertips. A huge opportunity is wasted, though, in that the cursor of an active inventory item does not change when it passes over an item it can be used on. This means lots of fruitless clicking—which tends to be a bigger time-waster than lots of fruitless tapping. The end result is an experience that is neither particularly better nor worse on either operating platform.

City of Secrets can be lauded for its insistence on taking the story in an unusual direction, devising strange uses for inventory items and puzzle solutions, and bringing with it an impressive sense of style, most evident in the outstanding graphics. However, over-reliance on style gives way to bizarre writing, humor that seems to constantly miss the mark, and puzzle design that is never good and sometimes terrible. There’s something to be said for an adventure that tries to be unique and memorable, and this game is, but those aren’t always positive things. Ultimately my memory of City of Secrets will be shaking my head and saying, “What a strange game.”

City of Secrets is a memorable adventure game for a few too many wrong reasons, but based on your taste in humor and tolerance for confusing puzzles, it may be worth playing for its weirdness quotient alone.

What our readers think of City of Secrets