English-speaking gamers never got a chance to play Pendulo Studios’ Hollywood Monsters, but with the popular Runaway series now complete, at last we get a chance to play the next best thing… or more accurately, The Next BIG Thing. Though purportedly not a remake, Pendulo’s newest game takes more than a few cues from its earlier concept, featuring a pair of bickering journalists pursuing a hot story amidst a reimagined Hollywood full of real monster movie stars. It’s a bold and clever premise that allows the developers to ramp up their already-significant weirdness quotient even further than before, while still remaining grounded in a real-world mystery. I recently had the chance to play through the first two lengthy chapters of the game, and if early indications mean anything, its combination of zany puzzle scenarios, offbeat humour, stunning production values, and of course a host of quirky monsters are more than enough to promise having a ball.

And a ball is where this tale begins, as the annual Horror Movie Awards ceremony is followed by a party at the ritzy home of movie mogul (and blue-skinned monster himself), William FitzRandolph. Assigned to cover the bash for The Quill magazine are ambitious but “dis…concerting” up-and-coming journalist Liz Allaire and Dan Murray, a former sportswriter now disgracefully demoted to the society section for disciplinary reasons. When the pair spot a monster sneaking into the producer’s office, it seems like they have themselves a scoop. With Liz ever gung-ho for adventure, Dan is quite content to let his young colleague do all the heavy lifting (at least, anything heavier than his flask, which he frequently raises as he waits out in his convertible). But when Liz disappears during her clandestine nighttime investigation, the next day Dan is reluctantly dragged in to save the story (and Liz if that’s convenient) in order to save his job. 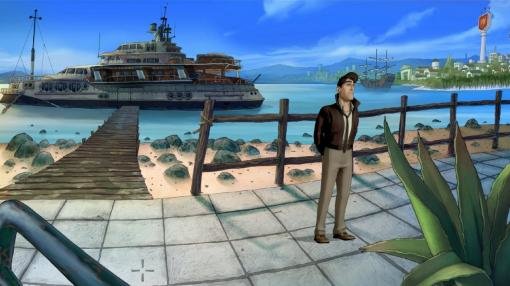 I know, Runaway detractors are thinking “not another damsel in distress rescue!” But no, this isn’t Brian Basco seeking out his perpetually missing girlfriend Gina. I don’t know what the distribution of gameplay is like later on, but Liz is a fully playable character in The Next BIG Thing, as the first chapter belongs entirely to her before giving way to her male cohort for the second. The two provide a nice counterpoint to each other. While many of the characters around them are monsters, Liz and Dan are human. Very, VERY human. The fast-talking Liz is passionate, vibrant… and probably a little bit “loony”, with a penchant for talking to herself, blurting out random non-sequiturs, and demonstrating an uncanny ability to finish people’s sentences. Naturally, she loathes that “jerk!” Dan, a square-jawed malcontent with a chip on his shoulder. Both are so flawed that it’d be easy to make them dislikeably overbearing, but in the early going they’re actually quite endearing. It’s hard not to be won over by Liz’s infectious enthusiasm (though Dan easily manages it), while Dan’s gruff, wise-cracking demeanor seems more like a bemused indifference than outright hostility.

Gameplay is the same regardless of which character you control. The point-and-click interface is very intuitive, allowing you to right-click through scrolling actions (usually only look with either use or talk), and left-clicking on hotspots. Not only does a smart cursor alert you to interactive areas, but a small “pop” sounds each time as well. You can’t run between distant locations, but then, doesn’t running often look dumb? Who DOES that? Instead, The Next BIG Thing does something different, as double-clicking causes the protagonist to simply fade out and then back in instantly at the spot clicked. A hidden menu can be called up by mousing over the top of the screen, giving you access to the inventory, as well as a hotspot highlighter and help button, which may or may not be active depending on which of three difficulty settings you choose at the beginning of the game. The narrated help feature provides only general hints to your current task, but the clue and associated image should be enough to give you the nudge you need. The other unique interface feature is the “Checkpoint” screen, which adds an image to track each new objective, several of which you can be working on at once.

The puzzles I encountered were largely inventory-based, with one dialogue-based challenge adding some welcome variety. Anyone who’s played a Runaway game will know to expect the unexpected, and The Next BIG Thing delivers. Solutions do follow the game’s internal logic, but in a world full of living monsters, logic is somewhat relative, so you can count on doing some lateral thinking or resorting to trying random items on everything. Tasks include things such as designing alien costumes (combined in inventory on an “imagined” doll for handy progress reference) and proving Dan worthy of being a human teleportation volunteer – which sounds basic enough, though here it means demonstrating minimum life expectancy, psychic devastation, and social expendability. Even for Dan, those are a stretch.

To accomplish your goals, you’ll need to explore in and around the FitzRandolph mansion and floating laboratory down at the docks, talking to one of the most eclectic casts ever to grace an adventure as you go. In the first two chapters alone, I met up with a depressed robot so obsessed with death he’d make Hitchhiker’s Marvin look like an optimist; a massive brute seeking inspiration for his poetry of pain; a Franken-zapped reanimated bodybuilder/scientist hybrid with a giant zipper across his forehead; and Professor Fly, a humanoid bug who invented a teleporter (somewhere, Jeff Goldblum is horrified). I told you this game was weird.

Dialogues can be a little wordy, as many include branching trees full of optional topics, so you’ll spend a fair amount of time engaged in conversation. Fortunately, all the voice acting I heard was stellar all around, including the two protagonists, who convey just the right whimsical ditziness and disdainful sarcasm to suit their respective characters. (I’ll let you figure out which is which.) In fact, apart from the inexplicable tendency for everyone to say “ayo” and “aya” in greeting, the audio is excellent all around, from chirping crickets to muffled gala sounds behind closed doors to varied footfall over grass, carpet, and stone. The music is pleasant as well, unobtrusively playing in the background and never feeling overly repetitive. The graphics, of course, are outstanding, as any look at the screenshots will tell you. Pendulo has once again created a hand-drawn comic adventure worthy of being an animated cartoon. In fact, it’s generously animated already, full of little touches like Professor Fly’s wings flapping as he zips down from his ceiling perch to Dan patting Tobby, the anthropomorphic Venus Flytrap living in the doghouse. If you like eye candy, you’re in for a treat.

For Runaway fans, recommending this game is a no-brainer, but even those put off by Pendulo’s earlier series would be wise to pay attention to The Next BIG Thing when it’s released in April. It’s not only beautiful to look at and nice to listen to, but the two leads create a positive first impression, their flawed individual personalities playing off each other well when together and distinct enough to make their adventures feel different when alone. And while some of the puzzles will undoubtedly strain the bounds of credibility, this is a world that encourages imagination, and if you do get stuck, the user-friendly interface will steer you in the right direction. The game isn’t laugh-out-loud funny so much as off-the-wall bizarre, but you can’t help but chuckle at the absurdity of it all. It’s too early to say for sure, but for comic adventure fans, The Next BIG Thing may very well end up being true to its name in just a couple more months.

adventor
Wow I'm pretty excited about this. Sounds like they've done a really good job with the interface and controls.

Majsan
CanÂ´t wait for this one!!

Jackal
I didn't say the characters were hand drawn, but the backgrounds certainly are.

larssl
I love the graphics of the Runaway series, and the next BIG thing looks like it will have the same style. But is it really hand-drawn as Jack Allin suggests, or 3D characteres rendered cartoonish (combined with some obviously hand drawn backgrounds)?

Lee in Limbo
That looks really promising. I love that trailer. In fact, I think I'll go share it to my Facebook page. Not sure that this will be the game of the year for me or anything like that, but it looks great, and it sounds like a lot of fun. I've been somewhat indifferent to Pendulo so far, but this may very well prove to be the game that wins me over.
Advertisement
archived preview