It's been almost two years since the second Sam & Max season closed with a dubious "The End?" and for a while there, fans were wondering if it really was. Though the episodic format served the irreverent crime-fighters well, Telltale Games shifted focus to several new series in 2008 and 2009, with the Freelance Police noticeably absent from their line-up. This spring, the dog and rabbity-thing are finally coming back for a third season -- tantalizingly subtitled The Devil's Playhouse -- and if our first-hand look at the PC beta version is any indication, the wait has been well worth it. 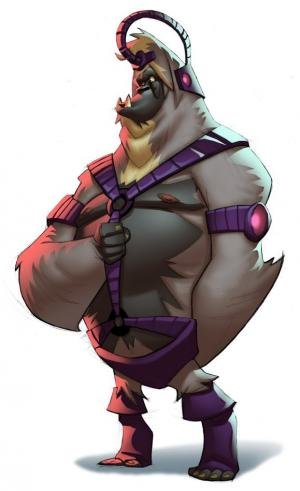 Though we have only the smallest hints of the overarching story at this point, the Rod Sterling-like narrator who introduces the series seems to know exactly what's in store for us over the next five months. The first episode, The Penal Zone, begins in medias res, with Sam & Max trapped aboard a spaceship manned by a giant gorilla named General Skun-ka'pe (or "Skunkape," as the Freelance Police prefer to call him). Stinky, the proprietress of the neighborhood diner, is madly texting on a cell phone nearby; Harry Moleman is passed out in an adjoining cell; a disembodied brain is calling to Sam & Max from elsewhere on the ship. General Skun-ka'pe is flying low over New York City, blasting cars off the streets and airplanes out of the sky.

"It's a familiar tale," intones the mysterious black-and-white narrator, stepping into the scene. "A power-mad space gorilla pitted against a canine detective and a sociopathic bunny with psychic powers. But, my friends, this story is different. In this story, YOU are in control."

The first segment takes place on Skunkape's ship, apparently right in the middle of a case. The story starts to make sense a bit later; for the first several minutes of gameplay, I just sat back and enjoyed the pandemonium. The dialogue is snappy as always, courtesy of writer / designer Chuck Jordan, who was the lead writer on Season Two. Voice actors David Nowlin and William Kasten are back in the roles of Sam & Max, and you'd never know listening to their performances that they've been off the beat for two years. Likewise, Jared Emerson-Johnson is again composing the music, starting with a frenetic jazz piece that perfectly captures General Skun-ka'pe's chaotic and destructive energy.

This portion of the game serves as the tutorial and gives players a chance to get used to the new controls. Although Telltale has been dabbling in direct control for a while now, this is the first Sam & Max game to use it -- a fact that may be worrisome to point-and-click fans. Luckily, control options are plentiful, with "click and drag" mouse controls, keyboard controls, and gamepads all supported. The controls were still being tweaked when I played, so I can't comment on the final implementation, but I did like playing with a gamepad. The game also uses a new dialogue system. Instead of displaying a list of sentences Sam could say, a "dialogue wheel" pops up with topics for you to choose from. Sometimes you can keep selecting the same topic and hear new information. The topic heading changes color when you've exhausted all of the dialogue possibilities, preventing you from hearing the same lines over and over (unless you want to).

In the tutorial, you also learn how to use Max's psychic powers, a new gameplay addition to this season. For reasons that become clear later in the game, the powers are associated with various children's toys, and at any point you can direct Max to use them. Some of the psychic toys in The Penal Zone include a deck of cards that can be used to read minds, and Future Vision, a View-Master type device that shows the not-so-distant future. The psychic powers will be used to solve puzzles, and often have funny results when tried randomly.

After the tutorial and opening credits -- which are a real treat for fans of the previous series -- the game resets to earlier that day, before Sam & Max got themselves trapped on Skunkape's ship. Their street has undergone drastic changes since we last saw it. Back when Season One was first in production, Telltale commented that they hoped to make Sam & Max's world grittier and dirtier than LucasArts' depiction had been in Sam & Max Hit the Road -- more like the crusty world depicted in Steve Purcell's comics. Well, they finally pulled it off. Walls are tagged with graffiti and the surfaces have a grimy quality that makes you want to wash your hands repeatedly. Pigeons, rats, and roaches are everywhere. The characters themselves are also more detailed and have a wider range of facial movements. Improvements to Telltale's engine allow for high-definition graphics, new visual effects, and even real-time shadows. Graphics have never been the main selling point in this series, but they're quite impressive this time around, making The Devil's Playhouse the best-looking Sam & Max adventure so far.

Don't be turned off by the thought of spending another few hours on the corner of Straight and Narrow. Though several familiar characters do return in The Penal Zone, they're not the ones you may be expecting (or dreading). And the street is nothing like you remember it. Bosco's is closed, Sybil's is blocked off, and even the Freelance Police office is inaccessible in the first episode. You do get to go into Stinky's Diner and underground to the subway, as well as to a few other nearby locations. In fact, this is the first game in Sam & Max's episodic oeuvre that truly feels like it's set in New York City. (An alternate reality version where a lagomorph is the President of the United States, of course.) The episode takes place entirely "around town," yet it feels larger and more expansive than previous Sam & Max games, in part due to the dynamic camerawork at key moments -- Skunkape's rampages are truly awesome -- and the overall improvement in visual style.

Though some references to past episodes are made, new players should be able to jump in at the beginning of The Devil's Playhouse without feeling like they've missed anything. (You'll be just as confused as the rest of us!) Sam carries a notebook that provides details about returning characters, as well as the story so far and a summary of Max's psychic powers. Like in other Telltale games, there's a contextual hint system that can be adjusted or turned off based on your preference.

It’s been a long wait, but the end is near, and the fun’s just beginning. After The Penal Zone hits PC, Mac, and PSN on April 15, there are four more Sam & Max: The Devil's Playhouse episodes on deck. Good to have you back, little buddies. 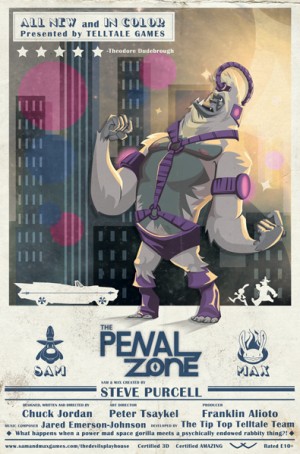 vintage85
Looking forward to this game :) dont be dishearted using a game padi isnt to bad .. When i played the point and click game longest journey i was addicted , when i got to the sequal Dreamfall i was gutted that it was a gamepad controller id need to use ...Giving it a chance it was so much better and had more options and was able to interact more... its a big plus :)

wielandsmith
Yeah. I like the Bosco. Just as long as it's not the Soda Poppers...

David Mouse
I hope Sybil and Bosco come into it somehow. Sure, they could be boring, but I thought that was the writers fault, and the characters could be used better and brought more directly into the story. Sybil's career changes could be played for proper effect, as she could conveniently become an expert on whatever the latest episode concerned, and provide lectures or tutorials on the subject or something. Anyway, I liked them.

adventor
It does seem silly that they got rid of the point and click interface. I mean direct control is okay but if I had point and click that would be great. But the controls should be better than TOMI. Man it was such a tease that you coulde use a gamepad for like 75% of the controls... weird. But controls aside, I look forward to Sam and Max 3 this should be a great game and if I can play it all with a gamepad then that is great.

bloody_eugene
Great!!! Sam & Max Season 3!!!! YESSS!!!! @Tramboi: come on, to not buy a good game for just its controls is silly... imagine if I don't want to play Grim Fandago for its controls... I'd surely lose some great adventure! And Telltale's direct control is not bad as the Grim Fandango one... quite the opposite instead! With click'n'drag I played Tales of Monkey Island only with the mouse and without keyboard - and now I miss direct control in other adventures! BTW.... it's already April 15th??!!??? :D

Tramboi
Too bad, Sirrus, that point'n'click control is a lost cause for Telltale. They managed to force direct control through our throats with a prestigious license like MI and now, they do it to S&M (which I won't buy for this very reason) http://www.telltalegames.com/forums/showthread.php?t=15372

JenniBee
Great preview! I also enjoyed the post on your blog (http://www.emilymorganti.com/blog/?p=1554) where you talk about how different it is coming into a series as an outsider as opposed to when you worked at Telltale. I'm really excited for this season. It looks like it could very well be the best yet! :)