The long, strange journey of Sam & Max: Season Two, which has taken us to the most bizarre renditions of the North Pole and Easter Island you could ever imagine, takes an entirely new direction with Episode 203: Night of the Raving Dead. It's a uniquely dark and droll setup for the series, and it is implemented with admirably clever twists and a brilliant ending sequence--but it comes at the price of a steep decline in actual laughter.

Night of the Raving Dead finds the once-quiet neighborhood of our quasi-heroes beset with yet another terrible attack--this time, it's not killer robots or triangular warp portals, but horribly disfigured bloodthirsty zombies with troublesome detachable limbs and a language all their own (and, for some reason, their own beer stein on the sidewalk). The story wastes no time at all in ushering our heroes to a Transylvania-esque castle in Stuttgart, Germany, which is host to this episode's villain--a metrosexual, nipple-pierced, heavily-accented vampire named Jurgen who runs a rave for zombies.

The entire atmosphere of the game is a dark one, and in some ways seems to be a direct satire of bleak emo culture, which is a jolting shift from the upbeat backgrounds of Santa's workshop and a tropical island, to say nothing of all of last season's happy, brightly-colored locations. Instead, the castle environment is very dark and fraught with rain and storms. The 3D elements of the castle exterior are fabulously animated, but the driving rain seems to cause a bit of graphical slowdown occasionally. Jared Emerson-Johnson's brilliant work, which to this point in Season Two has far exceeded anything we heard last season, continues with suitably morbid monster movie themes, as well as a spectacularly danceable zombie rave anthem. 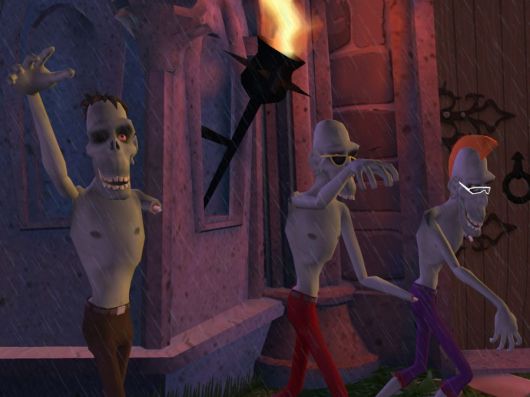 The story splits neatly in two--about an hour and a half in, a key event takes place (which is alluded to in the How-Did-We-Get-Here? introduction) and the entire dynamic of interaction changes in a most creative fashion, which is played up very well by the designers. The story proceeds through a lengthy puzzle that, as the series has always done, takes a motley crew of supporting characters and puts them to effective creative uses, and eventually winds up in a final battle sequence that ranks among the best in the history of the series--one which features yet another shift in the fundamental dynamics of the game that will prove to be a very pleasant, enjoyable surprise for longtime fans of Sam & Max. The final moment is a true cliffhanger with immediate impact on the upcoming fourth episode, and shows that Telltale learned a lesson from all the underwhelming "It's all part of a larger mystery!" endings in the first season.

I've already made reference to two fantastic dynamic shifts during the course of the game and I really want to emphasize how great the ideas developed herein are. At the overall design level, the game takes hilariously creative steps and succeeds in the riskier elements. However, it's tough to not notice that there is a decisive lack of belly laughs and immediately quotable dialogue--in fact, this is the first time in nine episodes I've reviewed that I have not been able to extract three solid one-liners for the review. Part of this is a function of the darker nature of the setting, which gives way to a much darker brand of humor in the dialogue. I'm certain that for some gamers this type of drollness is preferable to the occasional misfires that come with being over-the-top, but there's no question that the measurement of sheer laughter has declined in each episode so far this season.

The puzzles in this game are likely to prove frustrating to some--it is not the type of inventory-fest that Moai Better Blues was, but some guesswork will be required because the framework of multiple puzzles is just flat-out confusing. I had two puzzles in particular that I was greatly annoyed and deceived by while attempting to solve them, though both made sense in retrospect. Theoretically, the in-game hint system should be able to assist with this but with this episode it isn't just "not helpful enough" as it sometimes was last episode--it can be directly misleading. In the midst of solving one major puzzle, while walking down the main sidewalk I was specifically told by Max to drive back to Stuttgart, even though the only interaction I had left to complete was in the area I was already in. Telltale also seems to have fallen in love with the red herring item; count me among those who see no real benefit gained from picking up inventory items that not only have no use in the game, but don't even encounter a situation where they potentially could have use. 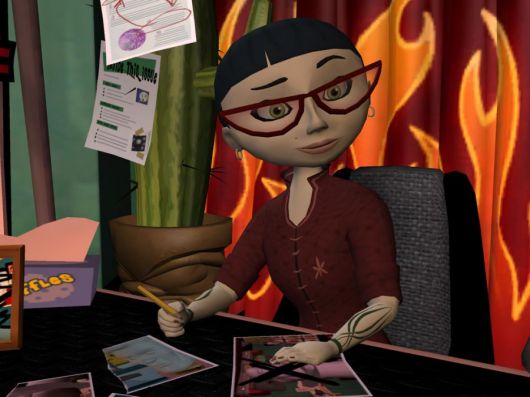 Even the optimal solution to the puzzles, though, still requires an excessive amount of driving between locations, and while the driving/parking animations are always impressive, they begin to become little more than an artificial playing time increase after a while. This season's games are already consistently longer than last season's, so it seems that an effort should be made to reduce the unnecessary travel time. Even with Sam's ability to run, the walk to the beloved DeSoto is often a long and aggravating one.

A cynical reviewer working on the sliding Sam & Max scale would probably give this game a 3.5, but even on their worst day, Sam & Max still bring plenty of technical excellence and creativity to the table, and I have to admit that despite the weaknesses in dialogue and the dramatic change in tone, I am in love with the fresh ideas that are displayed and continually impressed with the clever re-use of past supporting characters. There are plenty of references to prior events to reward the loyal player, and yet no major events hinge on knowledge of what has come before. This is a rewarding and enjoyable game, but not the best introduction to this franchise yet--that designation still belongs to Ice Station Santa in my book. At least I can say something that I haven't yet said to date--the ending makes me extremely interested to know where the story is going now, and with only thirty days between episodes, it won't be a long wait to find out.

This episode brings a lot of fresh ideas, but also a definite change in tone--which makes it another solid experience for series vets, but less of a recommendation as an introduction to the series.

What our readers think of Sam & Max: Episode 203 - Night of the Raving Dead