#5: Gabriel Knight: Sins of the Fathers

"Did you dream about the fire and the hanged guy and that lion thing last night?" 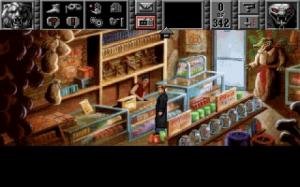 The graphic adventure was peaking in 1993, and Sierra was hard at work on sequels to their established dynasties: Police Quest 4, Space Quest VI, King's Quest VII, Quest for Glory 4, and Leisure Suit Larry 6. In the midst of these games came the unheralded entry of an unknown hero. His name was Gabriel Knight, a womanizing failure of an author who owned a barely-surviving bookstore in New Orleans. A non-hero if ever there was one; yet in Gabriel Knight many gamers found a character possessing all the traits of humanity that make a main character appealing. This guy was real, and the response to Sierra's creation was unanimously positive.

I remember reading the issue of InterAction Magazine in which Sins of the Fathers was first previewed. It was a short preview, in between the very first articles about Police Quest 4 and Quest for Glory 4, sequels I cared much more about than this game. I scanned the article quickly, raised an eyebrow, shook my head, and commented to a friend that the idea would never work. I am glad to have been proven wrong.

Even Tex Murphy casts more of a heroic light than Gabriel Knight, who has literally failed at everything in his life and has nothing going for him. His books go unnoticed and his store has no customers; all his hope is pinned on a novel he is working on about the series of voodoo-related murders occuring all over town. Gabe's family history soon plunges him, quite unwittingly, into a dark ring of secrets that every adventure fan has etched on their minds. 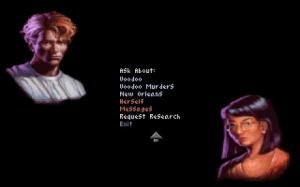 Gabriel Knight excelled in all technical areas without being extraordinary in any. High-quality graphics and an appropriately moody soundtrack gave the game all kinds of ambience. Sierra gave their familiar SCI interface a facelift, and now provided players with four separate alternatives to the Hand icon: Use, Take, Open, and Move, as well as separate Talk and Ask icons.

The writing, and especially the historical research involved, is also top-notch. I learned more information about voodoo from Gabriel Knight then I thought existed, and the painstaking attention to detail taken by Jane Jensen is so evident, as it is in the entire GK series. The script accurately portrays Gabriel not as any sort of hero, but as a downtrodden man who simply can not escape his fate. The series of events that occur as a result of this fate is dark, disturbing, and brilliantly told. 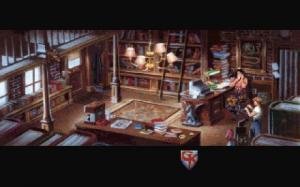 Despite all of its successes, by far the best thing about the first Gabriel Knight is the mood. Forget the laughable Phantasmagoria games and 7th Guest: this is the ultimate game to be played in a dark room. Every inch of the game drips with gloominess and tension, and the sense of dark foreboding that something is very, very wrong in New Orleans. I personally stopped playing (against my will) two or three times over the course of the game so I could turn up the lights and catch my breath (never been much for scary movies or games); the intensity is that thick. I am certain I'm not the only gamer who has experienced the conflict of "too scared to play, too fascinated to walk away."

A game whose plot centered around a cult created a cult of its own; a loyal legion of Gabriel Knight fans propelled the game to two excellent sequels at a time when adventure franchises were dying out left and right, and it was all because of the drama and intensity of Jane Jensen's original masterpiece. Gabriel Knight: Sins of the Fathers, the darkest and most intense adventure game ever, is the #5 adventure game of all-time.

Last time: Gabe, like Indy and Sam & Max, falls one slot from #4 on the last countdown. Why all these one-slot drops? Well, that will be explained tomorrow.