Plasticine... If your childhood even remotely resembled mine, you may have fond memories of playing with this colourful modelling clay-like substance, creating shapes and creatures limited only by the boundaries of your imagination. Now, thanks to the collaborative efforts of Russian developer Trickster Games and publisher Akella, the world of plasticine takes on a life of its very own in the form of a vibrant and stylized point and click adventure game called Tanita: Plasticine Dream.

The premise of this game is as follows: you play a little plasticine girl named Tanita who, in a dream, embarks on a tour around the world in a little plasticine aircraft. That is, until her aircraft crashes, leaving poor Tanita stranded on an archipelago of mysterious plasticine islands. Trying to escape from this emergency situation proves tricky enough; however, as Tanita keeps exploring, she discovers that there's a Main Evil Creature (MEC for short) running amok who's using bad music to catch and control all the fish he can and taking them to his Evil Factory to turn them into evil gadgets. Inevitably, it then becomes up to our newfound heroine to overthrow MEC and set the captured fish free. 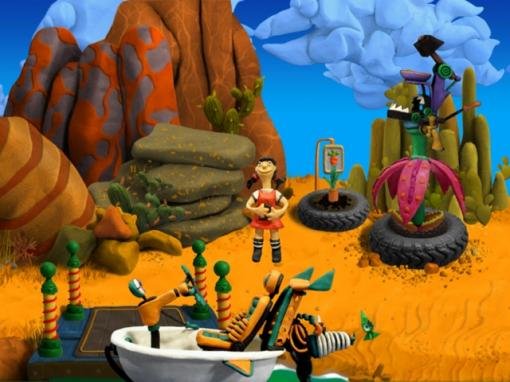 Accompanying this delightfully bizarre plot is an equally bizarre visual style -- arguably the most impressive and certainly the most noticeable feature of the game. For one thing, everything in Tanita: Plasticine Dream is, indeed, made entirely out of plasticine and brought to life using stop motion animation. This brings about an effect very reminiscent of The Neverhood, another well-loved classic claymation adventure game. However, unlike The Neverhood, Tanita's visuals have a smoother and more detailed look, with brighter and more vibrant colours. There are also plenty of idle background animations, such as floating clouds shaped like fish, that add a true organic feel to an already whimsical environment.

At E3, we had a chance to see the beginning of the game, which takes place in the atmospherically tropical setting of the islands, complete with palm trees and a funky calypso tune playing in the background. There were plenty of odd machines lying about and some strangely complicated doors to open using logic puzzle-esque combinations. In general, the game's puzzles are of such a logical nature, but with some very silly twists to them. Thus, don't be surprised at all to find volcanoes with movable tops, door locks that also function as juicers, and rockets fuelled by cakes. This is, after all, a dream, and one always in keeping with Trickster's slogan that "humor will save the world." 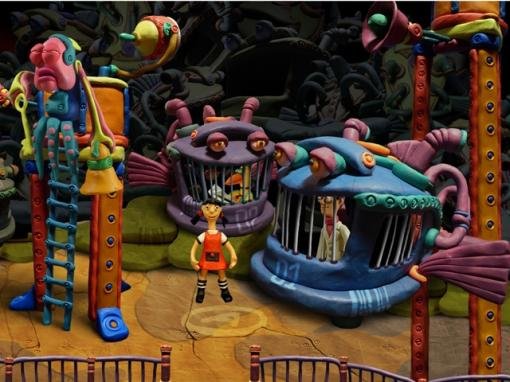 Aside from logic puzzles, several minigames are featured in Tanita, some arcade-based in nature, and others of a Simon-like memory sort. However, these are all are intended to provide lighthearted fun, and should not prove ridiculously difficult for those used to pure adventuring.

Another noteworthy feature we saw at the start of the game was a big telescope contraption that Tanita can climb upon and raise into the air. From there she can view the entire game world, including as-of-yet unexplored locations, from a bird's eye perspective. In addition, the player can also view various patterns through this telescope that give valuable clues to puzzles and minigames that you'll encounter throughout your adventure.

The early stages of Tanita are rather sparse in terms of supporting characters, yet as your explorations progress, you will discover that Tanita is far from alone in her world. She will definitely meet some new and eccentric friends, with whom she communicates using a gesture-based language creatively named "plasteranto". Such a simple method of communication, which uses very little text, allows anyone in the world to easily understand it, meaning the game won't have to face the usual problematic localization issues required for international distribution.

Actual models for the Professor, Tanita, and the Captain

In order to keep the models preserved when not in use, Trickster refrigerated them.

Tanita is designed to be equally enjoyable for children aged eight and up as well as adults, due to its silly, cheerful, and technicolour nature. It's also not intended to be difficult to play despite its unconventionally logical nature; the developers believe that most players will have no trouble finishing the game in five to eight hours.

Essentially, if you enjoy exploring bizarre and whimsical game worlds, and/or happen to be a fan of The Neverhood and claymation in general, then you'll definitely want to keep an eye open for this little adventure in a plasticine dream world. Tanita is almost complete as it nears release in Russia, and negotiations are currently being in progress for international releases, so be sure to stay tuned for more details in the near future. 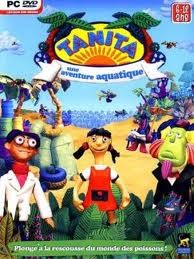