Adventure games set in the past are commonplace, and more than a few of them take place in Egypt. Most of these titles are serious, historically accurate, and often somewhat educational. Games set in ancient times that have their tongues firmly in cheek are rare, indeed, so it's always a nice surprise when a new one appears. Ankh is one such game.

Ankh is the sequel to a little-known game called... Ankh. Its predecessor won't be familiar to most of us, being available only on Acorn RISC machines. However, this new incarnation seems poised to bring itself to everyone's attention with what its developer, Deck 13, calls "a wild adventure in ancient Egypt which will make the adventure games of recent years look like a Teletubbies episode!"

The game centres around a young Egyptian man named Assil. As we learn in the introduction, Assil threw a huge party the night before in the grand pyramid built by his father, the Pharaoh's chief architect. This inappropriate choice of location for a shindig has understandably annoyed the pyramid's residents, one of whom — a long-dead Pharaoh — proceeded to curse Assil. As we take control of Assil, he's just been turned away from the gates of the palace (commoners of his sort are not welcome there), which seems to be his only hope of finding a cure. We must somehow find a way inside the palace to get an audience with the Pharaoh Iphenep, who can hopefully mediate and straighten out this whole curse business. In addition to this already bothersome curse, Assil has landed himself in even more trouble by acquiring from the pyramid the titular ankh. This treasure (which he uses as a bottle-opener, of all things) is one that a lot of unscrupulous types would like to get their hands on. 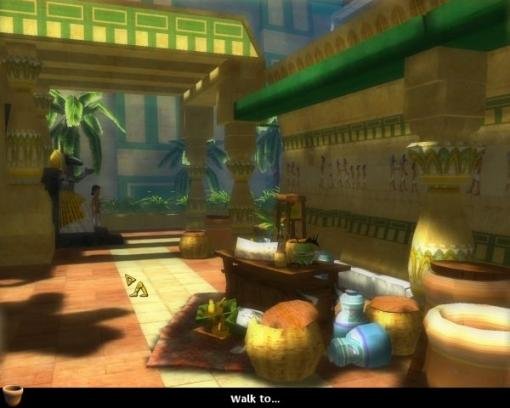 Along the way, Assil will meet a host of unusual and bizarre characters, or as the developers describe it, "a whole bunch of weird people, from happy slaves to frightened crocodiles and finally Osiris himself, the god of the underworld." In addition to this, Assil will face some nefarious foes on his journey, who help round out the diverse and eclectic cast. In the short section we played in our time at E3, we also met an Arabian ambassador's daughter, whom it seems blatantly obvious will be Assil's love interest in the game. With such quirky characters engaging in witty conversation, the game will be very lighthearted overall, despite the ominous situation Assil finds himself in. As with most comic adventures, dialogue trees present several amusing optional topics of conversation, and one or two serious ones that ultimately push the story forward.

Although we only got to play a short section of the game, we got a good impression of what art style the game will present. The graphics are a beautiful mix of 3D characters and backgrounds with real-time lighting. The demo showed the lighting off excellently, with dynamic shadows being cast by a fluttering canopy. The backgrounds and characters are of a skewed, comic-book style -- detailed and attractive but not utterly realistic. The game features a cinematic camera that swoops and pans around to always provide the best view of any given situation, thus avoiding the problem of being unable to quite work out what's going on that many game engines suffer from. Also noteworthy is an innovative system whereby foreground objects fade out as Assil walks behind them, again avoiding one of the annoyances that plagues so many releases.

The interface is simplicity itself: all interactive hotspots cause the cursor to change to the most appropriate action for that item, then left-clicking performs that action, while right-clicking examines the object. A LucasArts-style status line is shown at the bottom of the screen, showing which object the mouse is currently over, and which interaction is appropriate. Inventory is of the sort featured in Broken Sword, where moving the mouse pointer to the top of the screen calls up the items you're carrying. Here items can be examined, selected, and combined. Pressing Tab at any time pops up a list of your current objectives, which should serve as a useful alternative to the pen-and-paper note-taking some adventure gamers employ. 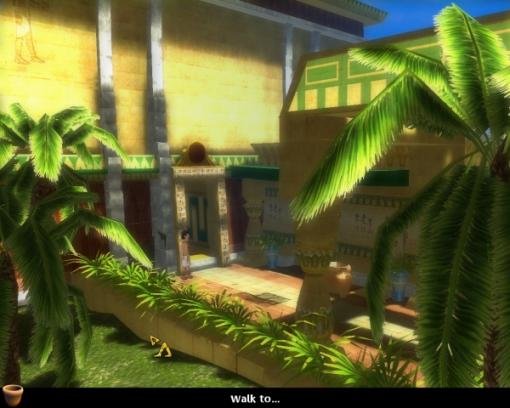 The music will be of an appropriate ethnic style, with a whole range of moods to fit each situation. The soundtrack is being handled by the famous German studio, Dynamedion, who most recently did the audio for The Moment of Silence. As is to be expected, dialogue will be fully voiced. In the demo we played, the characters mostly had British accents, which, while it could lend a variety of comedic regional accents, seems slightly at odds with the Egyptian settings. Whether it will suit the game or jar with the style remains to be seen (or heard...)

Ankh is planned for release at the end of this year. Deck 13 recently revealed that Telltale Games (a startup studio comprised of many former LucasArts veterans) will provide creative consulting during the game's development. With such esteemed help -- and judging from what we've seen of the game for ourselves so far -- Ankh looks to inject some lighthearted comedy back into the adventure genre, which is something that's been sorely lacking in recent years' releases.