Depressingly Common Adventure Game Design Flaws. Inherent in all adventure games, excused in the professional ones and expected in the amateur, are the frustrations, the irksome little foibles that dog the experience, turning what should be a gleeful descent into a new pixellated fantasy into an exercise in skull-clenching horror. And yet, no matter how many windows are broken by carelessly hurled monitors, adventure games continue to contain these bugs, perhaps because even the most cherished adventures in history are sometimes guilty of the crimes, and they are as such made valid to the professional and amateur designers of today. My mission in life is to expose these disasters of gameplay, to warn others to avoid them, and as such end their tyranny on our leisure time.

Adventure games have to be one of the most demoralising genres in the whole video game lexicon. Oh sure, we've all jumped around like baboons and broke our controllers in half over our knees when Super Mario falls down that bottomless pit for the forty-seven billionth time. But that is just anger, a positive letting off of steam, and more importantly is usually directed at one's own stupid self for not being able to leap that crucial extra nanometre. Very rarely are there moments in action or platform games that can truly crush a person's spirit.

It's something we take for granted these days that, should we ever become stuck on an adventure game, we can hop onto Gamefaqs and have a walkthrough up within seconds, which will usually cause you to smack yourself in the head and go "Gah! I was going to try that NEXT!" However, back in my childhood, no such lifeline was available. The original Zak McKracken? I was struggling with that for something like FOUR YEARS. The bobby pin puzzle near the very end took up about two of those. Monkey Island? Getting the monkey to grab the totem pole nose? I was trying to work that out for months. I can still remember how I'd spend whole weekends poring over my collection of The One Amiga Magazine, turning to the 'game help' sections and hoping in vain that someone will have asked a question pertaining to my problem at some point.

These were the days that tested our resolve as gamers more than anything else. But there were specific moments that really seized my pubescent soul in an ice-cold gauntlet and squeezed it into bone-cracking submission.

Sometimes, having been stuck in a game for weeks on end, a solution would just strike me out of thin air. I'd remember a puzzle, my inventory, a subtle hint offered in some glossed-over piece of dialogue... and then it would all fit together. "Of course!" I would cry, leaping to my feet. "Use the broom on the rock lobster! IT MAKES SO MUCH SENSE NOW!" Then I would get detention for shouting nonsense in class. But as soon as I got home, I'd wolf down my tea, hurl my filthy blazer aside for my dutiful mother to contentedly launder, and race upstairs to try out my latest theory, which I knew, I KNEW, would see me right.

Then comes the agony.

All of the day's excitement destroyed in a flash, my dreams of becoming any closer to understanding the mystery of the rock lobster, gone. Then I'd go and start cutting myself and listening to the Cure or something.

"That doesn't work" is very nearly the unofficial motto of the adventure genre -- it's used in an ironic way in Simon the Sorceror 2 -- and the reason why it frustrates so much is that it's just so abrupt, so brusque, so unsupportive. I'm not asking a game to come up with a different reply for every conceivable interaction, but at least for the sensible ones. By all means, if someone tries using a pickled egg on a carpet, tell them that doesn't work, but if you're telling me that I can't use a long piece of bamboo to pick up a set of keys someone has left on a wall opposite my cell, I'm going to want to know why. I don't care if I have to use the bamboo to feed the troublesome panda later on -- it makes perfect sense to me right now.

Why People Do It

Idleness, probably. Well, that's unfair. A lot of amateur adventures are designed by just one person these days, and what with all the other stuff on the list of things to do, a lot of things can slip the cracks. What's even more depressing, though, is when, especially in AGS games, attempting an interaction which the designer has decided is wrong results only in stony silence, because nothing has been entered in the unhandled_event function. If anything, this is even more frustrating than 'That Doesn't Work'. It's like you've done something so agonisingly stupid that the game isn't even going to dignify you with a response.

Many games do this, especially amateur ones. I freely admit that I've done it a lot myself, before I saw the light and started writing this article. I've received no end of complaints for a puzzle I included in 7 Days A Skeptic; it was clear that the player was supposed to shove the monster off the bridge, but I foolishly made it so the player had to specifically use a towel rail to blat him around the bonce, when some kind of Judo chop would have done just as well.

A Game That Does It

Discworld. What with Terry Pratchett being closely involved in the development, and what with Terry Pratchett being a dick, the original Discworld suffered from a criminal amount of That Doesn't Work. Especially since there were so many puzzles and so many associated inventory items. Large portions of the game found the player, pale and glassy-eyed in the early morning light, robotically dragging his gigantic collection of inventory items one by one onto every hotspot he could find, hoping in vain to hear something other than Eric Idle's casual three-word admonishment. 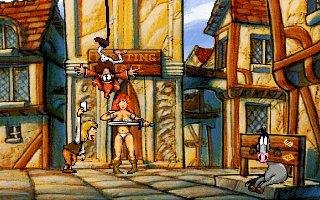 This approach became doubly necessary because a lot of the puzzles were extremely, EXTREMELY unintuitive. Picking one out of the air, I recall one bit where you have to block a chimney with the local equivalent of a Father Christmas doll. I suppose there was some weak connection there, chimneys and Father Christmas, but let's be honest - you needed Jonathan Creek's way of looking at things to figure that one out. Look at all the things that stood in your way:

1 GRR. There are any number of inventory items in the game which would do just as well a job of blocking a chimney, all of which solicited 'That Doesn't Work'.

2 GRR. There was no clue given at all that blocking the chimney was even necessary.

How To Avoid It

Fortunately for you, there are any number of ways to work around resorting to the That Doesn't Work stigma. Let's continue using that Discworld puzzle to examine how it could have been done better. Yeah, I guess there's no way of getting through this article without sounding like a pompous git, so I'm just going to accept that and move on.

The best thing to do to prevent the player becoming frustrated and bored is to offer hints, rather than the unfriendly “That Doesn't Work.” This isn't supposed to be a game of Battleship, an attempted interaction needn't be either a hit or a miss. If the player wants to block the chimney with, say, a Persian rug, but the rug is required later, you can easily deflect them in an encouraging way with a statement like "I think I'd rather block the chimney with something I'd have no further use for." Then you could attach a subtle hint to the Father Christmas doll to the effect that Father Christmas is famous for squeezing his gigantic crimson buttocks down chimneys and little else.

And of course you'd need to get the player to understand that they need to fill the house with smoke in the first place. Perhaps a smoke alarm visible near the fireplace, with the house's inhabitant offering a vague reference to being scared of fire.

When you're putting together the puzzles for your adventure game, you can help prevent a lot of frustrating using-inventory-on-everything scenarios by going through your game script, scrutinising each puzzle, and seeing if any other available inventory item could possibly be used to solve it. And if you do see an alternative solution, you could do one of three things:

1. Somehow prevent the player from having the alternative item at that point, eg. have a crafty monkey snatch it as they enter the room

2. Give some specific message explaining why the alternative item is unsuitable - maybe the bamboo rod is too flimsy to do the job of a broom handle

or 3. Make the alternative solution actually work. Remember you're making an adventure game, not one of those toys where you have to push wooden blocks through holes of corresponding shape. There's no real reason to create a broom handle if a bamboo rod would do just as well; it's just unnecessary padding.

A Game That Does This Well

Thinking about it, the best game I have ever played for intuitive puzzles has to be the aforementioned Zak McKracken And The Alien Mindbenders. There's a whole horde of inventory items in Zak McKrack, and I could give a thousand examples of puzzles with several alternative solutions. How about using a monkey wrench to wake up the bus driver, but also being able to do the same with any other long, hard item in your inventory, AND having the option of waking him with a merry kazoo interlude instead? You can use a butter knife to get a cashcard from under a desk, but you can also use any of the several pieces of paper, all of which can also be used for drawing maps. Then, when you try to lever up floorboards with the butter knife, it's obviously too flimsy, and you get left with a bent butter knife. Having so many possibilities and so many avenues to explore not only constantly rewarded the player's intelligence but provided the vital encouragement needed to make them push through to the very end.

That Doesn't Work? Oh no, my dear unintuitive adventure game -- it is YOU what doesn't work.