We get a small commission from any books sold.
All Bitmap Books
Written by
Rob Franklin — March 14, 2012

Incomprehensible plot twists, clunky dialogue, gaudy backdrops, naff music and irritating characters… the wrestling industry has it all, so it’s not surprising that indie developer Chris Burton has taken this kitschy pseudo-sport as the basis for a cartoon point-and-click adventure. Merging elements from the 1990s classics, Da New Guys: Day of the Jackass sees three protagonists outwitting the dastardly machinations of a pee wee wrestling nut in a new comic romp set against the backdrop of a WWF-style wrestling league. It ends up selling its own best ideas a little short, but its cheesy atmosphere and daft characters do make for a generally enjoyable, lighthearted game with some innovative use of the AGS engine thrown in for good measure.

Day of the Jackass builds on Burton’s 2003 freeware adventure, once again following the exploits of a wrestling tag team more famous for their failings than for their prowess. Here we’re thrown right into the ring with the terrible threesome embroiled in the latest Saturday night showdown – only this time it’s different. Against all odds the dimwitted Brain, the least impressive of the three, triumphs over adversity and takes home the title belt as the last man standing. It’s an event that sends ripples through the wrestling world and sets in motion a town-spanning adventure fraught with twists, unlikely team-ups, and bad jokes as our hapless heroes attempt to restore balance to the community and put an end to a sinister rival.

The real action kicks off at the trio’s apartment when Brain is mobbed and then kidnapped following his unlikely triumph, leaving his teammates Simon and Defender to hunt for him. The search takes place across several locations all situated in a single town built around a wrestling stadium. Our heroes inhabit a block of flats along with other wrestling stars from the same federation. Within the town there are other houses, bars, a beach and an island penitentiary, as well as the stadium, all of which must be regularly visited. The many locations make the game feel suitably broad, and the developer has done a good job of introducing new areas only after other sections have been solved, so you’ll never feel overwhelmed. 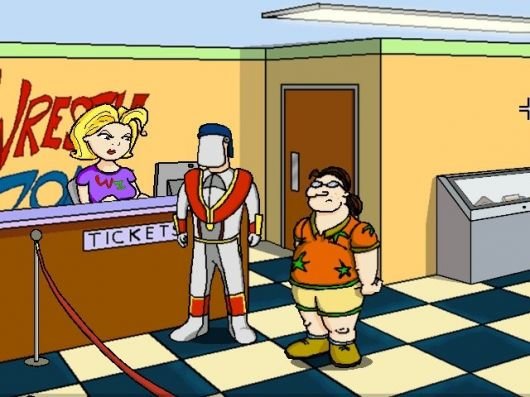 I imagine many gamers, like me, might initially be put off by the idea of a wrestling-themed adventure game, but fear not, as very little of the action takes place in the ring. Da New Guys may be set in that universe, but its premise mainly provides an interesting backdrop for a bizarre cast of characters. The oddly animated Ice Cold and the supreme jerk Dave Mayhem are two such examples of a stand-out supporting cast. The colourful wrestling costumes make for an eclectic if gaudy mixture of character designs with some fairly good voice acting thrown in to bring them to life. It’s a shame then that the protagonists don’t quite cut the same mustard: There’s the supremely irritating and unlikeable Brain, the slightly boring Simon, and Defender, perhaps the most engaging of the three whose face is never shown, hidden as it is by a riot police mask. This makes it hard to feel invested in him as a character – especially when he sits (literally) most of the final act out. Chris Burton performs all three, the result being that Defender and Simon often sound similar, while Brain’s more exaggerated voice seems somehow at odds with the other two when the trio are together.

The animation and visuals can similarly be at odds with themselves. On the one hand, Burton has tried to maintain the style of his 2003 original adventure – a sort of wonky, low-res Microsoft Paint look which does gives it a certain indie charm. But whilst the cartoon backdrops are passable, if simple, the character animations can often be jerky and the inventory item designs leave a lot to be desired (keys in particular look exceptionally poor). Then, just when you think you’re getting comfortable with this aesthetic, the game throws in some action sequences in fairly impressive 3D, in stark contrast to the style established up to that point. These are technically impressive but do highlight how much better this game could have looked had the developer rendered the entire game this way.

Similar other quirks also give rise to a feeling of ‘half-baked’ when playing Da New Guys. Plenty of credit needs to go to the puzzle ideas, as the game throws in some welcome variety to the conventional adventure problem-solving, but they end up either underused or in need of more polishing. At points there is a small amount of combat-based puzzle-solving, some Indiana Jones-style stealth corridors, a mix and match identity picture puzzle, as well as some tongue-in-cheek RPG elements. All of these are fun and break up any potential monotony of traditional inventory-based challenges, but each interesting element is a blink-and-you’ll-miss-it occurrence, while the mix and match puzzle is poorly explained and left to trial and error. Still, the ideas are there and that’s the important thing in providing diverse gameplay that doesn’t just rely on old standards. 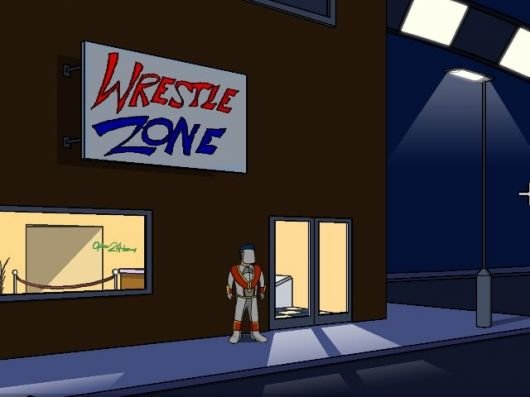 The most interesting gameplay element does last longer, but it’s introduced far too late. Day of the Jackass includes multi-character gameplay in the latter half of the game between two of the protagonists. This addition is a breath of fresh air that does a first rate job of spicing up the story, featuring some well thought-out puzzles that use the two companions impressively. Certain areas are only accessible to one or the other, and particular puzzles require you to think about the locations of your two characters. So why then does it only appear towards the end? By this point the story has gotten less interesting, so it could have been put to far better use earlier on. Interestingly, Burton’s first effort in 2003 made better use of this team dynamic, with plenty of puzzles and conundrums employing this style.

All this is managed through a familiar point-and-click interface with an inventory pane in the bottom left and the character-switching pane in the bottom right. The simple mechanics are user-friendly, with a single left-click to interact and a right-click to look. This doesn’t change throughout, despite the variety of puzzles, so there’s never a sense of not knowing what to do. Most interactive hotspots are necessary to your quest and easy to find due to the simplistic nature of the art design – there’s very little clutter on screen. Characters move swiftly with no laborious walking sections to endure, while getting around town is instantly accomplished through a map with key areas highlighted.

Difficulty is fairly low throughout, and if you’ve played through LucasArts’ oeuvre this game isn’t without a sense of déjà vu. However, the puzzles aren’t simply carbon copies and are for the most part well constructed with a good attention to detail. The game is split into three clear acts with a different set of characters in play in each. As Defender, you’ll spend much of your time hunting clues as to the identity of Brain’s kidnappers by speaking with other characters. With all the signs pointing to their old nemesis Smiley Joe, it isn’t long before he rears his pint-sized head at the penitentiary where he’s incarcerated. Naturally, things aren’t that cut-and-dry, with a pleasant twist midway through. Unfortunately, the third act's storyline is less satisfying, consisting mainly of a simple fetch quest seemingly tacked on to extend the length of the game, but at least this is balanced by the more interesting multi-character puzzle scenarios. A clever height puzzle at a burger joint is particularly well conceived during this segment. 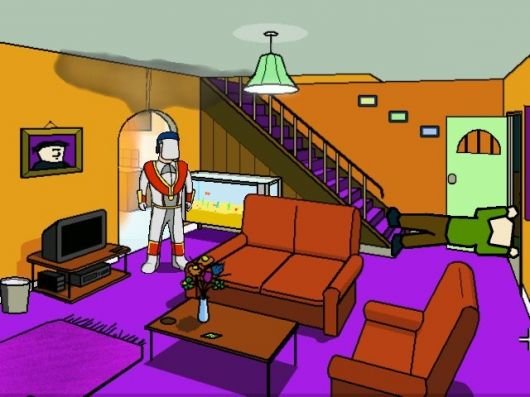 It doesn’t take long to work through all three acts (roughly 6 to 8 hours in total), but they’re equally well paced and no sections drag. It’s also got some pretty funny moments to keep things interesting – the mock RPG section and the Barman’s saucy story stand out as particularly chucklesome. Burton clearly has a flair for comedy as the script stays witty throughout, with only some of Brain’s clangers serving to ruin the mood (probably intentionally).

Final praise must go to the wholly original soundtrack created for this game. Fans of retro adventure gaming will find plenty to like in the score, with musical cues and a sort of kooky “muzak” feel reminiscent of the old midi sounds from the likes of Monkey Island and Day of the Tentacle. Whilst the soundtrack here doesn’t match the specific style of those games, it does ape their feel to create a nostalgic vibe throughout, particularly in the catacombs section of the penitentiary.

The same can actually be said for the overall game: Available exclusively at publisher Wadjet Eye's website, Da New Guys: Day of the Jackass is like a tacky love letter to classic adventure games. For the most part it’s not the prettiest of adventures, but it does have some nice ideas that are executed well, particularly the complex co-op puzzles and impressive 3D finale. However, the lead characters are a bit too irritating for their own good, and I just can’t shake the feeling that there’s a fair bit of untapped potential here, with far too many of the better concepts given short shrift and forgotten all too quickly. Chris Burton clearly has the talent, but with a bit more focus (and probably budget), this game could have been a real title contender. As it is, it puts up a fun fight for a while, but ultimately can’t measure up to the genre heavyweights it so clearly emulates.

GAME INFO Da New Guys: Day of the Jackass is an adventure game by Icebox Studios released in 2012 for PC. It has a Comic cartoon style and is played in a Third-Person perspective.

What our readers think of Da New Guys: Day of the Jackass

A good distraction especially as a small desert after playing a longer adventure game, Da New Guys manage to bundle some nice puzzles, average humor, decent characters together with a very cool soundtrack. Puzzles are... Read the review »