Review for Shadows on the Vatican: Act 1 - Greed

Shadows on the Vatican: Act I - Greed

The first of four planned acts of Shadows on the Vatican starts with a flashback to 1996: On a charity mission in Africa, an eminent Vatican priest named Dellerio is gunned down by unknown assailants even as his protégé, James Murphy, watches helplessly from an airborne helicopter. Shattered by the brutal incident and disenchanted with the Ecclesiastical Authority, James goes on to abandon his priesthood in Italy and return to his native Chicago to become a doctor. Now, fourteen years later, he's back in Rome on the invitation of Cristoforo, his best friend from his days with the Church, who says that he knows what really happened in Africa. But before they can meet, Cristoforo is violently attacked, leaving him in a coma, and the outrage propels James to initiate an investigation into a deadly conspiracy that spans continents and decades, perhaps involving some of the most influential members of the Catholic Church.

A religio-political thriller co-produced by 10th Art Studio and Adventure Productions, Shadows on the Vatican is loosely inspired by David Yallop's non-fiction book In God's Name, which delves into the death of Pope John Paul I in 1978, an alleged assassination it attributes to a power-group of global financial, political, criminal and clerical entities. Act I: Greed substitutes the papal murder with Dellerio's killing, while James scrapes the proverbial tip of the corruption iceberg, discovering vague evidence of illegal fund transfers and money laundering. This isn’t a revelation per se, as it is hinted at heavily from the start, and unfortunately for this particular installment, the developers played their cards too close to the chest and only tease about the big mystery, leaving this short and strictly linear debut to serve mainly as an introduction to the primary cast of characters.

James, the protagonist, is a sincere, no-nonsense doctor in his late thirties, and while he deeply distrusts the Church, he has full faith in God and still always carries a Bible. Blond and blue-eyed, he's evidently handsome despite a silly lock of hair that curls over his forehead and his questionable choice of pinstriped turtleneck sweater, and his charisma quickly earns him allies in the neighbourhood, including Mario, a typically gregarious Italian barman, and the Marano family, whose embarrassingly pushy matriarch tries to set him up with her daughter Paola, a teller at a local bank. Members of the ecclesiastical community are portrayed with decided irreverence, be it a nun with an affinity for alcohol or a priest with a shaky ethical compass. We also get a glimpse of Cristoforo's superior, the grim Cardinal Brehmen, who's less than thrilled to encounter James, and a mysterious woman named Silvia, who makes a late but interesting entry, allowing you to play a brief segment as her. 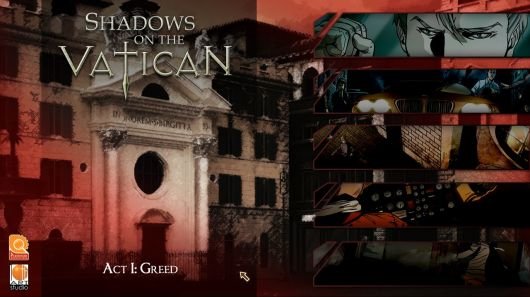 Set in Rome, Greed is austere in both appearance and gameplay. The action primarily circulates between a handful of locations, including James's apartment, a bar, a bank, a guesthouse, and a church in Capena. While depicted with realistic artwork, these places are restricted to one or two screens each and are almost bereft of accoutrements, with at most three or four useful hotspots per area. An optional in-game tutorial uses an ouch-inducing scenario befitting Murphy’s abilities as a doctor to introduce the easy controls: right-clicking describes an object, left-clicking selects it. Objects may be combined with others in the inventory or with onscreen hotspots, but in general there isn't much choice or complication given the few interactive items and linearity of the game, which restricts you to one task at a time. Several enhancements further streamline the gameplay: wrong item combinations are prevented by simply displaying a red cross over mismatches, the space bar reveals all hotspots, and an attractive map allows James to teleport between locations. The inventory is periodically de-cluttered, and completed areas are removed from the map.

Besides the inventory challenges, some of which demand keen observation of onscreen activities, there are also some standalone puzzles which are very simple but well-integrated with the story. All but one have logical resolutions; the exception being a point-and-click car chase that relies on trial and error to ascertain the route. Tech-savvy James efficiently uses his laptop to aid his investigation, and leads the player with lucid and detailed observations and opinions. He also jots down important codes and clues in a notepad. However, there's no mechanism to record or repeat the lengthy conversations that are the mainstay of the game, which usually conceal crucial information amidst barrages of chatter. So if you click impatiently through the dialogue or snooze during the schmooze-fests, you may miss out on cues and hints and be left wondering what to do next. There's also a fair amount of religious references and complex names of people and organisations, which may initially overwhelm those unfamiliar with the intricacies of the Vatican's operations.

But considering the slow take-off of the main plot – which is realistic given that James is literally clueless at the start and must build the case from scratch – the biggest asset of Greed is its conversations, which not only drive the story forward but also establish well-rounded character personalities for the long run, such as defining Mario as the go-to man for help on shady matters, or revealing James's lighter side as he banters with Mrs. Marano about dating her daughter. In a bit of fancy toggling, you can choose to select either subtitles during conversations, in which case speech bubbles appear over the active characters' heads, or select the ‘dialog box’ mode, where even as the characters chat in the background, their sketches appear in a panel in the foreground along with the speech bubbles. 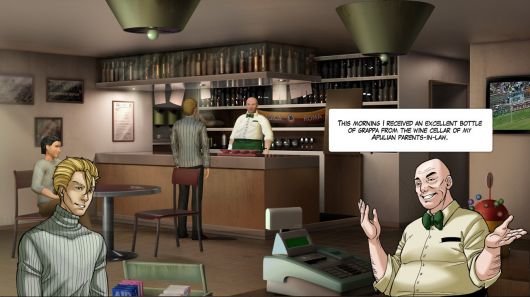 The game has some beautiful settings, like the street outside James's apartment and the piazza facing the Santa Brigida Church, but the screens lack the complexity of content to really engage, being too sparsely equipped and featuring areas that are permanently off-limits for now. There's almost no ambient animation except clouds moving overhead and the television in Mario's bar which constantly shows football. Other than a bit of 'sliding' while walking, the characters are fairly realistically animated, including a crouch, subtle conversational gestures, and some fluid inventory motions such as when James pulls a book out of his pocket. Most of the action, though, occurs with James turned away from the screen, or via cutscenes made of dramatic comic book-style panels, a technique continued in the menu and dialog boxes. These panels, illustrated with edgy sketches and vivid colour contrasts, fluently convey a sense of urgency and mayhem, and bring some much-needed visual punch to the otherwise staid scenes. The 1280x720 screens expand to full size at higher resolutions only if you don't select the 'use desktop resolution' option before the game loads (otherwise they are boxed in by black borders), and a recurring glitch has some speech bubbles sinking below the lower edge of the screen in the dialog box mode.

Greed is fully voiced, with some solid performances like the urbane speech of James, the hearty chatter of Mario, and the harsh retorts of a cagey jeweler. Cristoforo and Paola, both native Italians, sound distinctly American, though their voices are in character except for the accent. The worst rendition is left for possibly the key supporting character of the series – the sassy Silvia, who botches a lengthy segment of verbal sparring with James thanks to a dispassionate, poorly-punctuated dialogue delivery that sounds like the actress was just reading the script aloud, and continues similarly during her solo stint. The English translation from its original Italian is excellent, and lip-syncing is acceptable, with the speakers broadly coordinated with the voiceovers. The game has a rousing choral starting theme and an intense, custom-made rock song 'To Silvia', which plays during the credits. It also has a pleasant in-game soundtrack as well as serviceable sound effects, going by the adage 'less is more', which works well with the serious proceedings. The volume is inconsistent though, and fluctuates significantly, blaring out when you exit to the menu or during cutscenes, and dipping during certain conversations.

Available exclusively at the Italian publisher's Zodiac web store, Shadows on the Vatican makes a promising debut with Act I: Greed and advertises its potential well by setting up a complex, controversial story; creating a tidy, streamlined world that matches the gravity of the plot; and incorporating an engaging cast of characters. The dedication of its developers to the quality of gameplay, script, graphics and voice acting is evident, but though Greed is good at what it does, it simply doesn't do enough of it. Its playing time of about five hours is padded with lengthy conversations, while the linear progress, limited game world and straightforward puzzles never put up a serious challenge. Most importantly, its scope is limited to serving as a brief prelude to the series, which should ideally have been the first half of a more substantial game instead of a full episode in its own right. Cristoforo's ‘accident’, Silvia's introduction, and James's discovery of the hints of a financial scam are all parts of the known premise of the game, and nothing really surprises, or even excites, until the very end. It’s a story that looks well worth pursuing, but just when the mayhem seems to start, we're shunted to the credits after a brief trailer of Act II: Wrath, which will hopefully justify the anticipation created for it here.

WHERE CAN I DOWNLOAD Shadows on the Vatican: Act I - Greed

Shadows on the Vatican: Act I - Greed is available at:

The debut episode of the four-part Shadows On The Vatican sets great expectations, but Act I: Greed serves mainly as a prelude to the real deal, saving the action for the sequels.

GAME INFO Shadows on the Vatican: Act I - Greed is an adventure game by 10th Art Studio released in 2012 for PC. It has a Stylized art style and is played in a Third-Person perspective.