SpaceVenture (The Two Guys from Andromeda)

I think the sad part here—besides the obvious personal problems the team has had to deal with, poor guys—is that this might be the last project we see from Mark and Scott. It sounds like everything really went south, and I’d understand if they decided this was just too taxing to be worth doing again, especially without the financial infusion from a publisher that would bring a bigger staff and faster turnaround time. And I’m not sure they’d want to work with a publisher anyway, since this really seems like the game they themselves wanted to make.

I’m still looking forward to this and being patient, hoping the response from the community is strong enough to make them truly feel like it was all worthwhile, as the adventure game community is chock full of good folks who love The Two Guys from Andromeda.

I think the sad part here—besides the obvious personal problems the team has had to deal with, poor guys—is that this might be the last project we see from Mark and Scott.


Really? That’s the best thing about this project.

How many of us thought the 2 Guys were done after they closed down the Yosemite studio in 1999?

Even before that if you remember that these guys had a falling out well before Yosemite closed down and Space Quest 7’s fate was uncertain.

I never saw this coming so to hear that they’re actually working on a game is better news for me than hearing that they were forced into retirement.

I think its a bittersweet aspect which has effected most of the oldschool adventure kickstarters. When these projects were first funding everything was expiremental. There was a sense that maybe they could do these every couple of years. But when the realities of game making set in and adventuregames still dont have the revenue power of other genres.. it gets clear these are probably the last titles we see from these people. The important thing is that we got the chance to visit their stories again, and they got the chance to take us there.

There was a sense that maybe they could do these every couple of years.

those days… we can easily look now for 10s of astonishing threads here where we were jumping of joy, heh.. but no need, we were such fools but it was fun, no matter what.
but the worst part here at SV that one can easily sense from the project updates how Mark n Scott seem to be like dealing with a ‘burden’ now more than dealing with a project, nevermind ‘fun’??

but i still have hopes for a successful good game, and as for last or not i think thats too irrelevant at the moment with the state of this project anyways What really bugs me the most about SpaceVenture is, that they don’t even update voluntarily anymore. People have to bug them about updates before they splurge out something half-assed.

If I could go back 5 years, one of the things I’d do would be to say to myself, that don’t put money on SpaceVenture.

What really bugs me the most about SpaceVenture is, that they don’t even update voluntarily anymore. People have to bug them about updates before they splurge out something half-assed

Pure disregard once goal is achieved, as if they were entitled
Gives bad name to KS
Also St christophers school doing same
But its one trick pony for them now, no way they can pull another con after these?

This is really bad form from the devs. I wish KS had a clause to return the money to funders if a game is cancelled or not delivered after an X number of years. For games that never come out, to me it just feels like stealing.

Here’s my thoughts in blog form about SpaceVenture: http://playernone.blogspot.com/2017/06/spaceventure-my-biggest-kickstarter.html

i dont understand what takes so damn long. i hope this actually sees the day eventually, im pretty sure that hero u will never happen, and it looks terrible anyway.  going off topic a bit, but i wish the cole’s just made another classic low fi resolution AGS qfg game instead of that horrible looking diablo wanabe or whatever it is trying to be.  spaceventure looks great and they need to just get it out there. put the finishing touches already!

Well, the issues with Scott Murphy might be a big contributor, but then again, I’ve understood that they’ve had a hard time of getting experienced Unity coders as well, especially as they can’t pay top salary.

I believe, in the end, both projects Hero-U and Spaceventure both fell into similar traps: they underestimated the actual work needed to make a game in Unity, the difficulty of finding cheap, good labour and the vulnerability of a small team.

Though Coles also goofed up by basing their understanding of how modern 3D works into experience coming from 1990’s when 3D was still a much harder tool to work with. I’d assume they lost a good bit of time because of that one.

On a side (and slightly lighter) note, I did spot the third guy from Andromeda this past weekend at a nearby El train stop in Chicago. 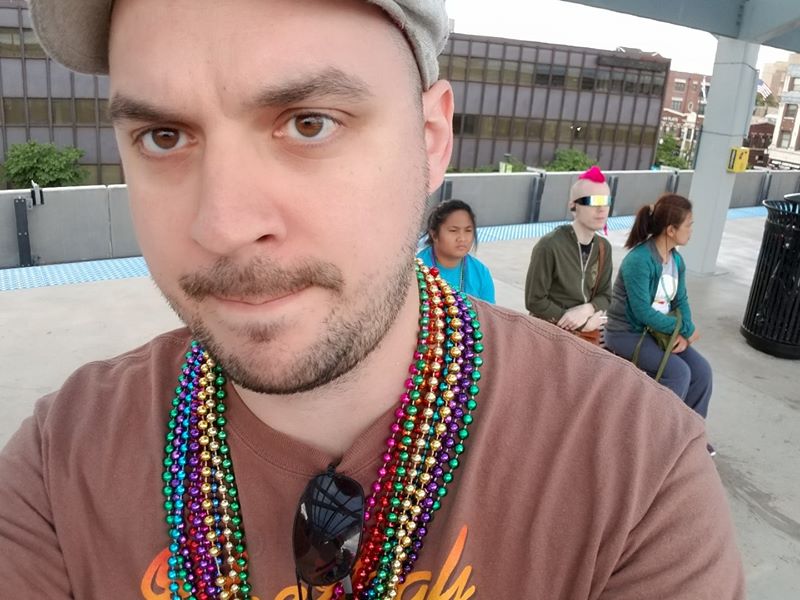