Let’s face it, we’re all a little spoiled for entertainment choice when it comes to the end of the world. Our wastelands could be nuclear or ravaged by natural disaster, our cities overrun by robot overlords or punks with neon mohawks; whatever your preference, there’s a virtual apocalyptic vacation with your name on it. But you’d be hard-pressed to find a societal collapse more peaceful and meditative than within the waterlogged realms of FAR: Changing Tides. Well, at least until your boat’s engine is on fire. But that was probably your fault anyway.

Developed by Swiss studio Okomotive, Changing Tides is the second entry in the FAR series, which began with 2018’s FAR: Lone Sails, which starred a girl traveling across a dried-out seabed in a land-based vehicle with sails. Changing Tides doesn’t reinvent the wheel – it gets rid of it altogether in favor of a seafaring vessel voyaging across rivers and oceans littered with abandoned structures and rusty machines. The fundamental gameplay is quite similar to the first game, but the experience is improved in nearly every way, and as long as you have the patience for the slower-paced moments, it’s a lonely journey well worth taking.

The game opens with a boy sinking beneath the water, surrounded by broken planks and submerged houses. His name is Toe, say the game designers, but you can call him whatever you want; he won’t mind. As you gain control, you can swim back up to the surface and begin your trek through a flooded village, maneuvering through former residences and over sunken streets. This first environment already shows more detail, variety, and color than did most of Lone Sails, and jumping across rooftops and moving in and out of buildings makes for a fun introduction to the basic 2.5D side-scroller platforming and swimming involved. Newspapers drifting beneath the waves, underwater rows of street lamps, and a memorial to a lost loved one all add interest and intrigue. Before long, you come to the main attraction: the hulking sailboat / steamboat / submarine contraption that you’ll call home for the remainder of the game, and a diving helmet for all the undersea exploring you’ll be doing. 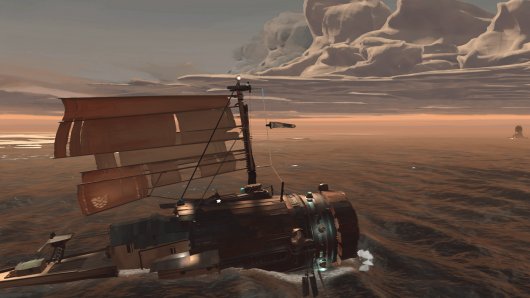 If you’re familiar with the first game, the goal here is basically the same: hop on that vehicle and move in whatever cardinal direction the right side of the screen is, for no clear reason beyond the obvious fact that there’s nothing left for you here. You’ll be doing a little platforming, a little resource management, and a little puzzle-solving to deal with the various obstacles that prevent you from moving forward. No particular aspect is all that difficult and you’re never in much danger of failing, but there’s enough challenge to keep things interesting. You can use the keyboard to control the character, but I found that a gamepad was a more natural fit for the running and jumping involved.

The simplest method of travel is to hoist the sails on your boat and let the wind carry you where it will (as long as that’s to the right, of course). These are the calmest moments of the game, and often the most beautiful. The water rolls and shimmers in the hazy light, spewing upwards as the bow of your ship carves a path through it. Rocky islands or ice floes meander past, and an occasional seagull or elk reminds you that you aren’t quite the only thing alive. Watching storms roll in is a particular highlight, as the waves grow choppier and the light dims. All of this can be experienced with little interaction, besides tweaking the sails every so often to maintain alignment with the changing winds.

Even though movement is limited to the 2D plane, the camera will shift and tilt in three dimensions, providing a better view of what’s around you and allowing you to soak in the sights. The 3D models aren’t highly detailed, particularly when you zoom the camera in close, but it’s artfully rendered all the same, and I often found myself reaching for the screenshot button like a tourist taking photographs. At least the end times are pretty. 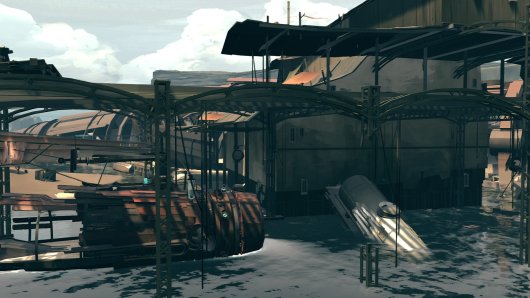 Joel Schoch, who composed the score of Lone Sails, is back with another excellent soundtrack that blurs the lines of folk, jazz, and classical to create an earthy, playful, sometimes dissonant but often hopeful accompaniment. It’s so good it stands out in its own right as being worth an extra purchase – as was its predecessor, which is still on regular rotation in my own library. The music isn’t always playing, though, as often the designers let the ambience of wind and waves or the muddy, bass-heavy underwater sounds come to the fore, highlighting a sense of lonely desolation.

This may sound a bit slow and atmospheric, and it can be at times, but it certainly isn’t all smooth sailing. For one thing, the wind isn’t always there when you need it, meaning it’s time to rely on your fuel-guzzling engine. Fortunately, by fuel, I mean pretty much any and all objects small enough to be carried over and tossed into the vessel’s incinerator: crates, barrels, suitcases from an abandoned train station, music boxes, even flowers from that memorial I mentioned earlier (there’s even an achievement for that). Maintaining your fuel level by collecting and storing such items on your ship is integral to making progress, but the consequences of running out aren’t dire, just tedious. I forgot to stock up once and was forced to go diving, trawling the ocean floor for scraps and hauling them back up. Fortunately there’s a sonar mechanism on board that will aid you in locating these sunken treasures should the need arise.

As you roam forever rightward, you’ll be impeded by a variety of obstacles – sometimes man-made, like gates, walls and fallen pieces of broken structures; and other times natural, like icebergs, waterfalls, or even the weather itself. In some of these, you’ll have to leave your craft behind for a bit while you puzzle out how to clear the way or circumvent the barrier. The set pieces in these segments are fairly impressive as you’ll traverse giant buildings and figure out how to operate large-scale technology. Other than jumping and climbing ladders, interaction with the environment is generally limited to pushing and pulling objects, pressing buttons, and throwing switches. These elements are clearly highlighted with a glowing teal color, meaning you’ll usually be able to tell at a glance what’s important to the task at hand, and you’re unlikely to be stuck there for long. 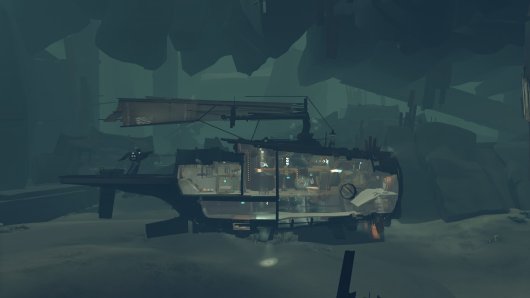 While you travel, you’ll also be attaching pieces to the ship that serve as upgrades, and some of the puzzles you complete in the external machines and buildings serve as tutorials for the new functions. One of the most game-changing additions allows you to submerge your vessel into the water to navigate flooded caverns and tunnels, and this adds a lot of – er, depth to the experience. At any moment, there are two worlds to explore: the one above the waterline and the one beneath. Even in those lengthy segments where you’re just skimming across the waves, you could take a moment to submerge your ship if you so choose and see what’s down there. Extra touches like swarms of jellyfish or soaring stingrays make it worth a look every so often.

The more features get tacked on, the more you have to do to maintain your ship. The most difficult and seemingly frantic sections of the game had me jumping back and forth throughout the vehicle managing fuel consumption, cooling the engines so they wouldn't catch fire, repairing damaged sections, and running to the front of the boat to push the charged-up boost button. Though not especially taxing if you’re used to platforming, some of the tight spaces and the close proximity of buttons and switches had me making frequent mistakes. I can’t tell you how many times I tried to drop the hose only to grip a lever instead, or was going to grab more fuel in the lower deck and suddenly found myself falling through the bottom hatch into the water, watching as my boat chugged on without me and having to swim to catch up. I mostly found these moments comical and they increased the feeling of chaos, but it can border on frustrating from time to time. The game doesn’t want you to fail, though, so even if your engine does catch fire, you can, you know, just put it out. You’ll have to use a repair kit to get it back in its best shape, but you can still keep going. 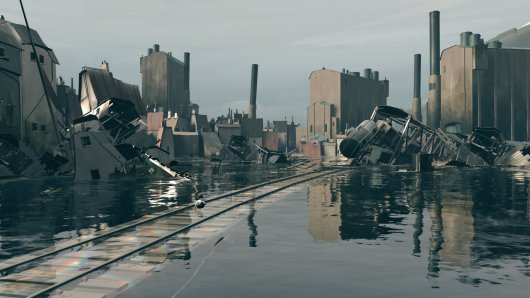 I will say, although you could certainly play this game without having played Lone Sails, particular story moments won’t have nearly the same impact, so I recommend going through the prior game first. Like its predecessor, Changing Tides has very little explicit storytelling, but through murals, statues, and sometimes the machines themselves, there are further hints about the backstory of whatever caused this cataclysm. I tend not to be too great at piecing together these kinds of narrative clues, though, so I’m still mostly in the dark, but the focus is really more on the individual journey of the protagonist and the obstacles he must overcome. You’d think that the setting and premise would suggest a bleak and dour tone, but I found that the overall mood was one of hope, persevering through the onslaught of challenges with the belief that there is something worth fighting for, and a recognition of the underlying beauty present in life and the world. And for that, I found the story to be ultimately refreshing and uplifting. While I could see the ending coming from several nautical miles away, I still couldn’t help but get a little emotional when it arrived, as it’s masterfully handled.

If you don’t mind an overall slow pace, punctuated occasionally by some faster-paced moments where you’re jumping, grabbing, and handling multiple systems simultaneously, then FAR: Changing Tides comes highly recommended, especially if you enjoyed the first game. The plot may be slight, but the story is found in the journey through waterlogged ruins, vast oceans, and undersea caverns. You and your vehicle will go through a lot by the time the credits roll at around the six- or seven-hour mark, but the feeling of defying the odds and persevering to the end, even if that level of challenge is more implied than actually experienced, makes the voyage worth it. It may be the end of the world, but I think you’ll enjoy the ride.

FAR: Changing Tides is available at:

A hybrid of platforming, puzzle-solving, and systems management, FAR: Changing Tides is a visually stunning vehicle-based adventure that exceeds its predecessor in creating an intriguing post-apocalyptic world with light but engaging challenges while also giving you plenty of slower moments to drink in the sights.

GAME INFO FAR: Changing Tides is an adventure game by Okomotive released in 2022 for PC, PlayStation 4, PlayStation 5, Switch, Xbox One, Xbox Series X and Xbox Series S. It has a Illustrated realism style, presented in 2D or 2.5D and is played in a Third-Person perspective.

Galador: The Prince and the Coward 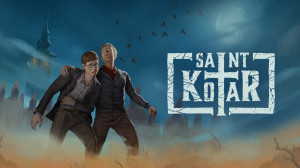 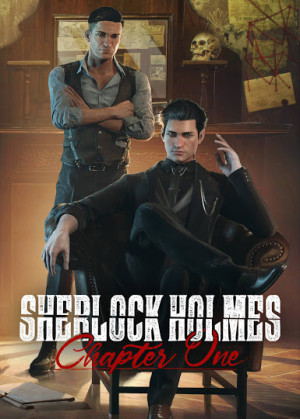 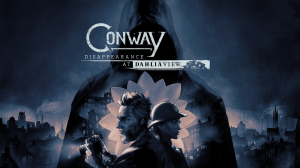