continue reading below
» Home / Articles / Reviews / Over the Alps review

Review for Over the Alps

The Secret of Castel Lupo

During the difficult times our world is experiencing in early 2020, we surely all have a hunger to visit any type of reasonably scenic outdoor locale, but I would suggest that there may be no more singularly beautiful natural setting on the planet than the Alpine region of Switzerland. With over 40 snow-covered summits topping 13,000 feet, overlooking quaint and peaceful villages lush with green grass and dotted by endless bodies of calm reflective water, the Swiss Alps deserve a place at the top of almost any tourism bucket list. Though most of us won’t be getting there any time soon in person, indie developer Stave Studios has taken this remarkable backdrop and transformed it into a delightfully intriguing espionage-themed narrative adventure set near the outset of World War II. With a story written by acclaimed British game designer Jon Ingold and driven by a unique decision mechanic, Over the Alps is a treat for any visual novel fan.

The tale begins as an anonymous young couple enjoying a romantic outdoor dinner ventures into the basement of their house to select some suitable wine. After opening the Chateau Vercoli case and lifting a bottle, they discover a postcard from the past at the bottom of the box. The view then segues to a 1939 newspaper headline as Mussolini condemns the escape of political prisoners from his custody in Italy. Then our unnamed hero is introduced, currently in Milan and writing to a colleague named Aubrey on a postcard—or to be accurate, a postkarte. Both are British spies under the authority of a group called Control, and the protagonist is telling Aubrey the story of his current mission, which begins on a train with a chance meeting with a mysterious and beautiful Fraulein Wolff. Soon, paths cross with an Italian contact whose beautiful and mysterious daughter has been taken captive. Who exactly is on your side and who is waiting to double cross you? And who has turned the Swiss Police against you?

The visual novel mechanics require you to choose your actions or lines of dialogue not from a text list, but rather by applying “stamps” to the postcards that your adventure is being written on. These different-colored stamps have icons that represent moods. The blue top hat represents a debonair deed, but perhaps you’d rather use the yellow disguise glasses, which inspire an act most befitting the espionage aspects of your profession. Or, if you consider yourself the fearless consequences-be-damned type of spy, you’ll find yourself fond of the red axe stamp. The actual line of dialogue you’ll speak (or the action that you’ll take) for each is shown in text form, allowing you to confirm your intent before making your final selection, so you may want to page through your options carefully—or perhaps you’ll find yourself consistently gravitating to a certain trait. Personally, I may not make the best spy since I couldn’t seem to stop using the green “honesty” angel halo stamp. 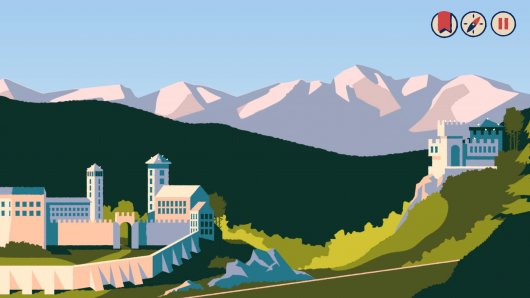 Over the course of each of the game’s scenarios (there are four chapters, each containing 8-10 scenes), you will write a new postcard by choosing the next series of actions or dialogue lines, with a couple paragraphs of follow-up text in between. When you meet Fraulein Wolff, will you choose a variety of flirty debonair reactions? Will you be nothing but honest and sincere? Maybe some combination of the two throughout the conversation. You could also choose the passive route and just sit next to her in silence. In that case, doing so will prompt you with a story notification that “Fraulein Wolff doesn’t like you,” and this will affect future conversations; the game frequently reminds you gently of how people view you and how it affects your situation.

As with any visual novel, the challenge is light and the game doesn’t offer much on the technical side, so it must fail or succeed on its writing—and what a charmingly well-written game Over the Alps is. Jon Ingold first gained a reputation two decades ago, while still in his teens, writing text adventures in the interactive fiction community (his All Roads remains one of my favorite games in that genre) before achieving greater fame through inkle’s mobile Sorcery! games and the epic 80 Days. Ingold is one of the best today at both writing dialogue and scripting narrative, and all his skills are on display here; every beat of this spy story is crackling with energy, humor, and action. The protagonist’s inner monologue has all the charm and confidence of any great British spy, and scenes move quickly and efficiently, never weighed down by bloated filler or unnecessary subplots, and characters are vivid and memorable.

It’s also truly impressive how the historical era and geographical setting are used as intriguing background without slowing down the pace with factual minutiae or becoming inaccessible to those who just aren’t that interested in much more than outracing bad guys and getting the girl. Yet if you know your history and the developing situation in Italy and Germany and how it affected the Swiss region in the tense times of 1939, you’ll be fascinated by every detail of the frequent true-to-life newspaper headlines. This game is never, for a second, anything other than enjoyable to read through, and that is a testament to the skill of Jon Ingold. 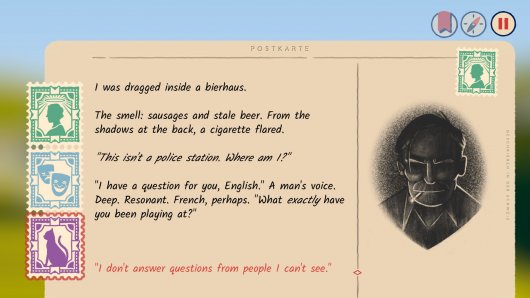 There’s not a lot of elaboration necessary to describe the interface. The story plays out in text form on postcards, and you click (or tap, if you’re playing the iOS version) on the desired stamp to continue the story. When there are a large number of stamps to choose from on the PC version, clicking and dragging up and down is necessary to bring other stamps into view, and the mousewheel allows you scroll back to review all earlier text on the current postcard. The scrolling feels slow and jerky, and when there are more than four stamps available the mouse clicking and dragging is very clunky, when the stamps could easily have been reduced in size to eliminate the extraneous movements. I ultimately recommend playing on an iPad if you have access to Apple Arcade, as this is obviously the system Over the Alps was primarily designed for and the quick tapping and swiping feels much more intuitive.

By the end of each scene on your journey, your postcard has accumulated a healthy stack of stamps on the top right, and you’re given a Confidential Field Report that summarizes the impact that your most recent actions had on your attempt to elude your pursuers—are they closer or farther from you than when you entered this location? Did you leave footprints, or were you able to leave a diversion and throw them off? In my two playthroughs, I never really had to worry much about how close the enemies were; I was comfortably ahead and able to focus on just enjoying the story and delightful writing more than any danger I was in.

There is, of course, significant replay value with the variety of choices constantly available to you in every scene. Admittedly, most of them are just window dressing to explore the outstanding writing, but you’ll need to replay at least once to see all the scenes, as there are usually two different routes to select from a map that you can take to reach your next location. After stealing a car, do you ditch it and walk to your next destination? Or do you risk being spotted and drive the stolen car? You’ll ultimately arrive in the same place, but your path may change your relationship with another character in the meantime. A diary is constantly available to you with a broad summary of each scene, as well as the historically authentic news stories that interweave with your mission. 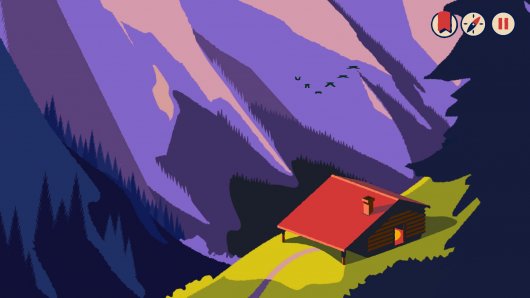 Though the game is primarily text-based and the written part of the postcards takes up almost the entire screen, the beauty of the Swiss Alps is also a fixture, with a beautiful animated background as you arrive in each location. The graphics are simple, colorful pictures in the style of vintage travel advertising (each image is, presumably, the front of the postcard that you are writing on) depicting the hotel, or café, or ski resort, for example, that you’re about to enter. They are really nice looking, so it’s unfortunate that they are only visible for a few seconds before the backside of the postcard fills up most of the screen—a portrait of your current counterpart occupying the rest—and the writing begins anew. There is rarely musical accompaniment, but the game is filled with excellent ambient sound (if there’s anything more soothing than a train endlessly rolling down its tracks, I haven’t heard it).

Though presented as a standalone adventure with its Apple Arcade release in late 2019, the recent PC port indicates that this case is in fact just the first of a planned trilogy of similar games, with the next one set in Switzerland a year before the events of this game. I’m not a history buff of this era, and have never had the chance to travel to this part of the world, but there’s something about a good spy story with snowy mountains in the distance that holds universal appeal, regardless of your level of interest in the topic. With its stellar writing and crackling story, its two-hour play time is consistent with most high-quality movie experiences, with genuine replayability adding even more. It won’t scratch any type of puzzle itch that many adventure gamers highly value, but Over the Alps is one of the stronger visual novels you’ll play this year—and probably the closest you’ll get to experiencing tourism any time soon.

Over the Alps is available at:

Debonair, aggressive, honest, deceiving—whatever your spy style, Over the Alps is a wonderful visual novel with a really fun mechanic. Picking this game up, with the promise of similar games still to come, is a choice no story lover will regret.

GAME INFO Over the Alps is an adventure game by Stave Studios released in 2019 for Apple TV, iPad, iPhone, Mac, PC and Switch. It has a Stylized art style, presented in Illustrated text and is played in a perspective.