Cat-astrophe Games’ tongue-in-cheek adventure The Unholy Society sounds like a comedic romp well worth a point-and-click outing: a priest with a stylish air of James Bond about him while purifying the minions of hell should have been a slam dunk. Despite noticeable attempts at integrating an interesting globe-trotting narrative, however, what’s on offer here barely qualifies as an introductory chapter to a larger whole. Sadly, a small handful of uninteresting side-scrolling stages and a half-baked combat system that doesn’t manage to pull off its single distinguishing gameplay mechanic very well can’t even be considered a “romp,” let alone one worth playing. Clocking in at under two hours in length, the one thing this game gets right is that it blessedly doesn’t waste much of your precious time.

The story centers around Father Bonaventura Horowitz – Bon or Bonny to his friends – a priest with attitude and a tendency to crash his skateboard through stained glass windows. At least, that’s what the title screen would have us believe, though this is never so much as hinted at within the actual game. This man of the cloth certainly has a wild streak, however: he curses, he shacks up with ladies, and he enjoys going toe-to-toe in violent face-offs to bless the hell out of the creatures of the underworld.

As the game opens, Bon, away on a Hawaiian island retreat with a pretty woman, is called back to action by His Holiness to return to his childhood home of Silent Virginia in order to officiate the wedding of his estranged sister. Before he can get underway, though, his escort reveals herself to be a succubus, and must be dispatched with extreme prejudice. 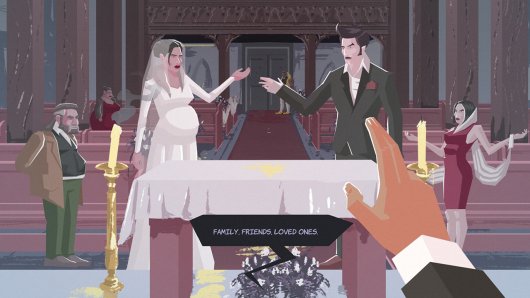 To do this, the game employs a first-person combat system where you guide Bon’s crucifix around the screen, revealing invisible evil visions and, more importantly, randomly placed holy sigils. Pass your crucifix over two or three of these and activate them in certain patterns by hitting the space bar to cast a holy spell that damages the enemy, heals Bon, or a combination of both. The enemy, meanwhile, will attack Bon automatically each time an on-screen timer runs down to zero; the one who runs out of health first is, of course, the loser.

There’s nothing wrong with a simple combat system, but the one in Unholy Society has a major flaw that reveals itself soon enough. You start with two spells at your disposal, out of a possible five that are eventually unlocked by defeating monsters. Prior to each confrontation, you have to assign three of your spells to be used (the game uses an app on Bon’s phone for this), and any sigils you activate must then build one of these three spell chains to work.

The trouble is that, even with only five spells, there are so many permutations that the combat system cannot handle them all. Each enemy battle screen only hides around three or four sigils on it for you to find, and that simply isn’t enough variety for each chosen spell to work. Long story short: only certain spells will work in certain battles by default, and you’ll need to retry some encounters if you happened to choose the wrong ones for it. Since which sigils are available is an artificial problem created by the game itself and not an issue with, say, your lack of reflexes, it’s a pretty egregious oversight on the developers’ part when designing the combat system in this way. 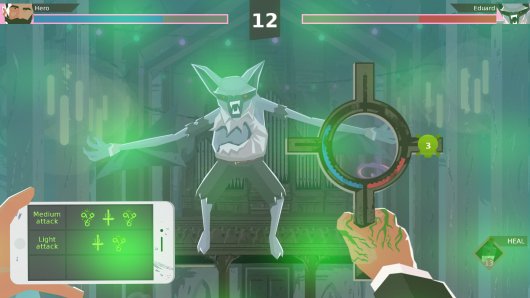 Outside of combat, you’ll explore the town of Silent Virginia, or rather walk from left to right through a number of scenes that depict locations like “the church”, “the mansion”, and “the graveyard.” The Unholy Society is a point-and-click adventure in the sense that you’ll point and click repeatedly on the left or right side of the screen to make Bon move in that direction, and occasionally you’ll do so on an on-screen indicator to engage a dialog sequence with a townsperson or pick up an item. Apart from this and slaying a handful of demons, there’s not much to do – no puzzles to solve beyond “collect the items in this area to proceed.” It’s all rather trite from an engagement perspective, akin to the simple mechanics of proceeding through a visual novel, but without the interesting lore, characters, or plot.

That’s not to say there is no story at all, and while it’s not incredibly entertaining, it probably still counts as one of the game’s highlights. You do meet a few members of Bon’s family – his sister, her beau, his aunt and uncle – and there’s an attempt to infuse some narrative by Bon being framed in a nefarious murder plot that takes place during the wedding ceremony. But judging by the developer diary video, this was meant to be a far grander adventure, spanning multiple locales around the world in order to track down the eponymous Unholy Society behind the protagonist’s framing. Instead, the setting is limited to a single main location and it’s all over before you know it, with not nearly enough time to develop characters or plot well.

The stylized presentation is adequate without blowing your mind, with flat 2D graphics that are just a few steps above something created in Adobe Flash player. Character movements and even some backgrounds feature a good amount of simple animation: candles sputter, lights flash in windows, a train passes by on distant tracks. Environments, while relatively small and simple, include enough visual detail to satisfy. What’s missing is the characters’ expressiveness, something to endear us to them. A handful of interjected scenes of comic book-style panels add at least a little bit of much-needed flavor. 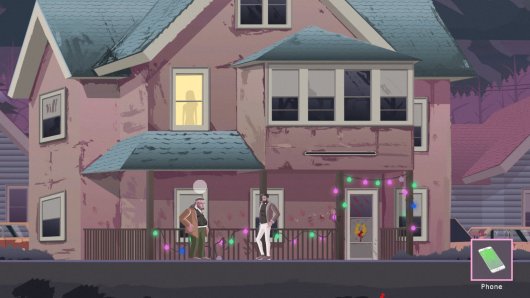 The sparse collection of synthesized musical tracks, divided between town exploration and combat tunes, are equally average but serve to set an eerie mood before kicking it up to a cheesy action vibe in battle. The score offers just enough to keep your ears busy, but is immediately forgotten the second the game is shut off. There’s enough potential here to suggest that, given more time and money, the developers would have been able to offer a more refined presentation, but ultimately nothing really stands out as more than passable.

The Unholy Society is difficult to view as anything more than a prototype for a larger-scope experience. While the immediate mystery is wrapped up, it’s clear that the real players behind the scenes have yet to be dealt with. Indeed, the promise of more is backed up in the cliffhanger ending that teases further adventures still to come, essentially branding this outing as an introductory chapter. Unfortunately, as such it fails to excite in any capacity on its own. Although traces of something more substantial are already evident in things like the visual design and narrative, the extremely short length, lack of player agency, and a combat system that seems out to shoot itself in the foot make it a tough sell. Without some more and tastier meat on its bare bones, The Unholy Society ranks just above a trip to the confessional as a source of entertainment.

To forgive is divine, but The Unholy Society comes up sinfully short in too many areas to deserve a full redemption without further acts of contrition in future installments.

What our readers think of The Unholy Society