Tall and small. Blind and deaf. A musician and a sketcher. That’s the long and the short of the two player characters in Punk Notions’ relaxing third-person 3D sightseeing tour Weakless. While gameplay is slight and the story threadbare, this stroll through an ancient and fantastic forest presents many grand views and an assortment of collectible opportunities for the protagonists to indulge their hobbies for a pleasant couple of hours.

Deaf is a squat anthropomorphic tree person who, as its name suggests, is unable to hear. Its constant companion is Blind, a lanky fellow tree person who sports a pair of antlers but is unable to see. Together the two set off through the world of Bastion for a nice day of hiking, each needing the other’s abilities in order to proceed.

The game doesn’t offer much more to go on, simply dropping the characters into its world and sending them on their merry way. Even the names of the protagonists and setting aren’t disclosed in-game as no one ever talks. (The appellations come courtesy of Weakless’s Steam achievements list.) According to the game’s trailers, it appears that Deaf and Blind are on a journey to stop the “rot,” a form of pollution that is poisoning their world. In all honesty, I only saw these videos after completing the game, and from the gameplay experience itself I can’t say that particular mission even registered on me. However, for those who pick up on it, it does add an environmental theme to the otherwise leisurely goings-on. 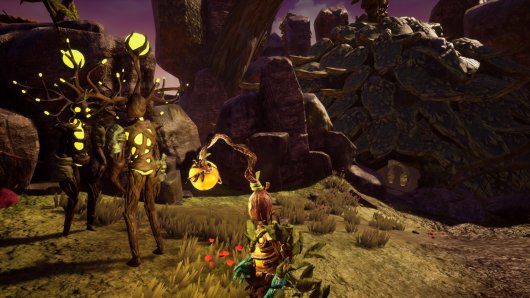 The journey of the two companions wends its way along scenic paths through the woods. Sometimes the surrounding environments close in on them, such as when they’re wandering through caves or tunnels. At other times, the beauty of the world is really showcased when the space opens up and grand vistas are revealed. I really did pause just to take in the impressive sight of a large, multi-tiered valley with its lush vegetation and assortment of pools and waterfalls. Elsewhere, the pair are able to board a raft-sized leaf for a gentle ride down a natural waterway. A prickly hedge maze (which isn’t really a maze but a linear path with obstructions that need to be moved) provides even more variety in the flora. It’s not all nature on display though, as you’ll also have various opportunities to wander through ancient, crumbling, sandstone ruins across the game’s eight levels.

The characters themselves, switchable at any time by the press of a button and controlled by either gamepad or keyboard and mouse, fit in well with the nature theme. They look like fully realized tree creatures, with wild roots shooting out of their seed-shaped heads, rather than mimicking familiar models like the The Lord of Rings’ Ents. If anything, the design style seems more influenced by Jim Henson fantasies like The Dark Crystal or Labyrinth, as there is a certain puppet-like quality both in the way Blind and Deaf look and in how they move that is quite charming.

Although each of the game’s main characters is deprived of one of their senses, this feels mostly like a gimmick instead of being a core part of the gameplay experience. Deaf being unable to hear simply means that no sound effects play while it is being controlled, although the game’s dreamy wooden xylophone-esque music continues to loop in the background. 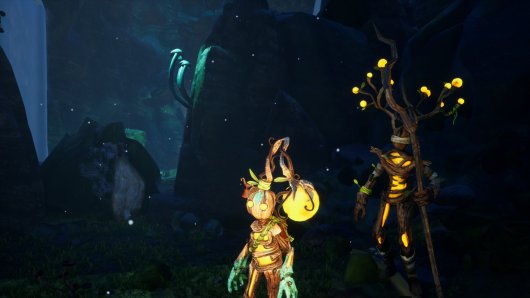 On the other hand, in some ways Blind sees more than Deaf does despite its name, being gifted with a sort of x-ray vision. Blind carries a walking stick that can be knocked on the ground to send out a reverberating soundwave (if nothing in the immediate environment is already creating noise). Unlike the echolocation of a bat, this wave travels through solid objects, allowing you to see things beyond, in black and white, like multiple panes of glass. In some instances this can be a bit disorienting, as it can be hard to tell when a wall is right in front of Blind or when it is some distance away if they overlap. Over time, if no further sound events occur in the environment, Blind’s view shrinks to the immediate vicinity. Given the difficulties in judging depth with Blind’s vision, I ended up playing most of the game as Deaf, only switching to Blind briefly to circumvent obstacles when necessary.

The “disabilities” of Blind and Deaf don’t impact the gameplay much. Save for the last level, where a noisy flashing machine temporarily incapacitates the characters in turn, there is only one other instance where this aspect features prominently, and that is when Blind has to adjust an array of ancient conveyor belts by seeing through different levels of a crumbling edifice to make a path for Deaf.

Far more relevant are the skills each character has been, more or less, arbitrarily assigned. Deaf carries a lantern attached to its head, which it can shine to cause certain plants to grow or move to open pathways across lakes or through dense foliage. It also has the ability to climb some walls that have hand and footholds. Meanwhile, Blind can stamp its staff to ring large cymbals in the ground in various places. Striking these in the correct order can trigger ancient machinery to open doors or operate elevators. Blind, being bigger, is also able to push and pull various boulders or moving platforms to form paths through the environment. 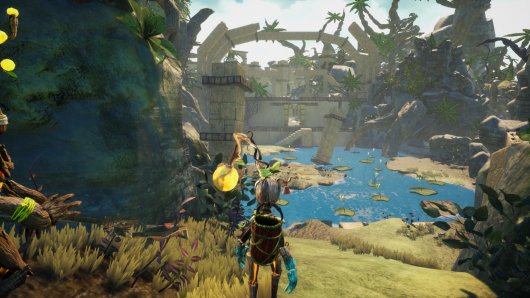 Rather than puzzle-solving, moving through the game world – and admiring the view along the way – is what Weakless is all about. Blind and Deaf’s journey is mostly linear, as there are seldom any side paths. What alternate routes do exist typically stop at a dead end, where you’ll find either some instrument that Blind can play or a rock upon which Deaf can sit to sketch the current view. Both of these actions are triggered by a simple button press and involve no skill or further interaction from players. Deaf’s pictures and a list of Blind’s played instruments are collected in journal pages accessed through the game’s menu. They can be called up to look at any time but aren’t mandatory and serve no practical purpose within the adventure itself.

Not only is there minimal challenge to stretch out Weakless’s two hours of play time at best, there is no narrative to speak of and the characters are never developed beyond their skillsets. The goal, essentially, is to walk from the beginning of the game to the end, occasionally being interrupted by obstacles in the way, such as closed doors or boulders. The route to take is rarely in doubt and when a problem is encountered it’s usually “solved” in one of two ways.

The first is simply by following the game’s instructions. When a climbable wall is encountered, an on-screen prompt appears depicting Deaf, indicating that’s the character to use to climb the wall. Similarly, when a heavy boulder is blocking your path, a symbol for Blind appears, signaling that it’s time for a little brute force only it can provide. No thought goes into overcoming these sorts of hurdles, although in some of the more open areas you may have to look around carefully to spot the particular obstruction that needs to be dealt with. 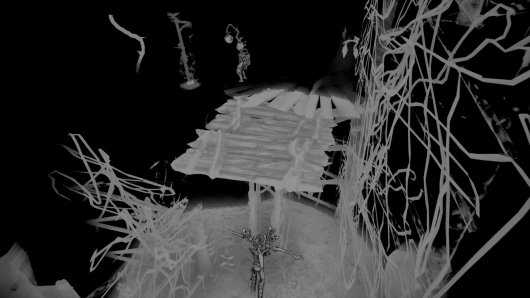 The second approach to making progress is trial and error, exemplified best in the cymbal sequences Blind has to tap out on the ground. There is always a nearby stone board that shows a series of bars of different heights, denoting which of the metal dishes to thump. The random experimentation comes from figuring out which cymbal matches which length of bar. For example, does a bar with a length of three represent the disk on the left, right, or across the clearing? Hitting a cymbal will play its sound, followed by a metallic thunk if the incorrect one in the overall sequence has been chosen. Strangely, there is no accessibility feature for these sequences, meaning it doesn’t show any visible indication when a thunk sounds. While very few games offer such options, I found it a curious omission in an experience ostensibly about hearing- and sight-impaired characters.

If you’ve read this far, it should be clear by now that there’s just not a lot to do in Weakless, and yet while that is certainly the case, it does not make for a bad game. The setting and visuals are quite splendid in what is meant to be a quiet, relaxing experience. And really that’s what Weakless is: an experience. Not a game to be beaten. Not a story in which to be immersed. Just a simple walk for two friends through the park – at least, if that park were a grand fantasy forest with ancient ruins and the walkers were puppet-like tree people. Don’t come looking for a challenge, but if you’re in the mood for something beautifully short, sweet, and a little bit Zen, then this stroll through the world of Bastion may be just the ticket.

Emphasizing style over substance, Weakless provides plenty of gorgeous views to appreciate but little else to leave a lasting impression.

GAME INFO Weakless is an adventure game by Cubeish Games and Punk Notion released in 2019 for PC and Xbox One. It has a Illustrated realism style, presented in Realtime 3D and is played in a Third-Person perspective.

What our readers think of Weakless