Once upon a time, two children journeyed into the deep, dark woods…

You’ve heard that one before, haven’t you? Of course you have—it’s an old, old story, as ancient as fear and as human as curiosity. Wrapped up in that simple setup are two of our most natural desires: to stay safe from what frightens us...and to approach it. The forest is full of beasts and shadowy things, so of course we’d never go alone...but that doesn’t mean we can’t look around when we’re in there, does it? Just a little bit. Just to see. After all, what could it hurt? All the messy, contradictory impulses at the heart of our fascination with fairy tales are on full view in Deqaf Studios’ Creepy Tale. Like the best bedtime stories, it’s full of spooky characters, unexpected situations and daunting challenges, but its short length and a troubling resemblance to established work detract somewhat from the experience.

Creepy Tale begins inauspiciously: two boys wander into the woods on a mushroom-picking expedition, when one spies a golden butterfly floating by and runs after it. Before he can catch it, though, two hideous beasts appear, grabbing and dragging him away before his brother can see where they’ve gone. The remaining boy sets off in pursuit, unsure of what’s happened to his sibling but unwilling to abandon him. Along the way he’ll have to charm, avoid and outsmart numerous strange and dangerous creatures, including an agoraphobic goblin, a hungry witch and a music-loving ball of hair, all of whom hold clues that can guide him on his quest. The journey is full of unexpected twists and turns, with an unexpected villain lurking at the heart of it all. 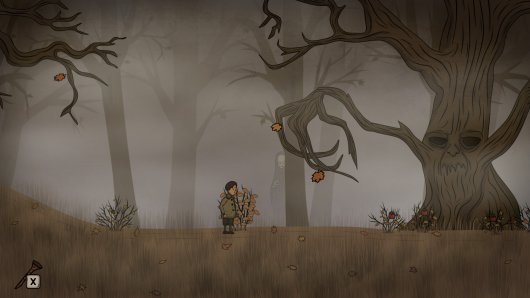 The game drops you into its world with little preamble, so that the big forest is just as forbidding and alien to you as it is to the protagonist. There’s not even any dialogue to center you, as characters converse through pictographic speech bubbles accompanied by character-appropriate mumbling and grumbling sounds. The keyboard/gamepad controls are explained through on-screen prompts—left and right for movement, up to jump, with a separate key for using/interacting—but that’s the last bit of hand-holding the game will do for you, as you’ll have to discover the rules around each obstacle on your own.

For a game with precisely zero intelligible dialogue, the process is remarkably intuitive. Most of the time I knew what my goal was and what needed to happen next without having to be told. There were a few puzzles where the logic was less clear and I wound up proceeding through trial and error, but those were the minority. Each screen is organized so that obstacles and points of interest are easy to discern; there’s an option to have hotspots marked when you approach them, but it's turned off by default.

In each setting, the boy encounters a new creature or structure that he has to sneak past or outwit. Once you’ve made it past an area you won’t need to return, so there’s no backtracking. You can pick up items as you find them, which for the most part go into your inventory (to be automatically called back up when a puzzle requires), but a few multi-use objects will instead appear as part of the interface with a prompt explaining how to access them. You can also manipulate your environment directly, pushing and pulling large objects when you need to reposition them to climb, bounce on or hide behind. 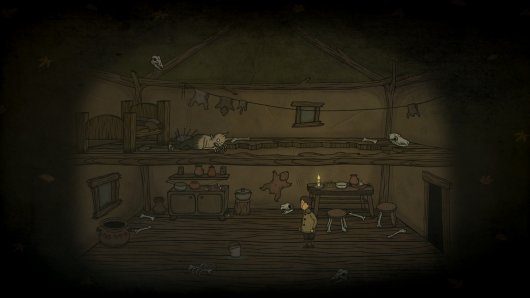 The game is broken up into eight chapters, with an autosave occurring at the beginning of each. Other than that there’s no save system, which can be annoying if you need to quit mid-chapter. It was also a pain when I encountered a late game bug that seemingly turned off my ability to interact with hotspots, forcing me to start the entire chapter over; fortunately this glitch was the only one of its kind, and it never recurred.

Creepy Tale puts a lot of effort into establishing its atmosphere of fairy tale foreboding, realized through a storybook art style with muted palette and haunting synth-orchestral soundtrack. The game works hard to make you feel like a frightened child alone in the woods: barely-visible phantoms lurk in the mist and peep out from behind trees as you walk past, dead leaves rustle all around you, and the best you can do when encountering strangers is to hope they won't notice you. The creatures are truly frightening, especially the toothy beasts who snatch your brother in the intro; with their blank, glowing eyes and their hungry, hairy frames, you'll never doubt that they represent very real danger. The world feels bigger than you, and it wants you to know how little power you have—and yet you must persevere anyway.

This aesthetic should be the game's crowning achievement, and in a vacuum it would be. What threatens to break the spell is a single sentence in the end credits: "Inspired by the work of John Kenn Mortensen." Mortensen, an artist and illustrator, produces scenes of menacing creatures in surreal settings, often with unsuspecting children dawdling nearby. Looking through his portfolio, though, I got the uncomfortable impression that the developers were more than "inspired" by his work—in places, they come within a hair’s breadth of appropriating and reusing it for their own purposes. 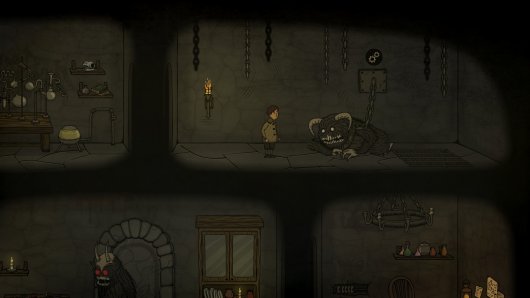 Indeed, some of the creatures in Creepy Tale are dead ringers for Mortensen creations, including the ghosts that appear in the background, the leering, brother-snatching monsters and the protagonist himself, who's nearly identical to the child portrayed in a particular untitled Mortensen piece. The line between "inspired by" and "adapted from" is often thin and fuzzy, but the visuals here feel like they cross it more than once, and it makes appreciating the game a much more complicated task than it should be. There's nothing wrong with responding to an artist's work with work of one's own—most art owes something to what's come before, after all—but the visual borrowing on display in Creepy Tale goes too far to be considered simple homage.

This is a shame, because it’s a shadow cast over what would otherwise be a strong, enjoyable title. The story, simply told as it is, is an intriguing and unexpected take on an old premise, and while the playtime is extremely short at around two hours, the experience you get is packed with engaging worldbuilding and brain-teasing challenges. And yet, while it initially appears to be bursting with creativity, the revelation of how deeply indebted it is to another creator’s work leaves it feeling derivative and a bit uncomfortable to play. Much of the game points toward the developers possessing the creativity and imagination to develop something entirely unique, so one would hope that they’ll rely more on their own vision and less on someone else’s next time.

Creepy Tale is available at:

The side-scrolling Creepy Tale offers a captivating journey through the dark woods of imagination, but a short playtime and an overly-derivative visual style make it hard to enjoy fully.

GAME INFO Creepy Tale is an adventure game by Deqaf Studio released in 2020 for Mac, PC, Switch, Xbox One, Xbox Series X and Xbox Series S. It has a Stylized art style, presented in 2D or 2.5D and is played in a Third-Person perspective.