As its title suggests, Veritas is a game about finding truth. A multi-layered science fiction mystery that is as unsettling as it is engaging, the latest adventure from indie UK developer Glitch Games prompts players to question their surroundings, and predicament, at every turn. Its lead character seems a bit too cavalier for his own good, and the story loses steam in the final act, but its smart pacing and spectacular puzzles make it easy to recommend for fans of classic first-person point-and-click adventure.

Players assume the role of a man named John, who wakes up in a small holding cell with no memory of how he got there. A note on his bed, labelled 16/16, relates an earlier exchange he had with Christina, a woman being held captive in the same facility. After obtaining a handful of tools for escaping his cell, John discovers he is inside a complex operated by a company called Veritas. He then begins searching for a way out, and hopefully to recover his lost memories along the way.

Veritas appears to have been abandoned, though not for very long. Hot mugs of coffee still sit on desks, cigarettes burn in ashtrays, and computers remain on, awaiting commands. Signs of both daily life and the sudden disruption that must have interrupted it fill the dimly lit concrete corridors of the lab. There are no windows in the building, nor any details given as to where you are. Hints are strewn about via promotional posters for the company’s products, and written records left behind suggest that the protagonist and others were brought here for some sort of experiment involving memory manipulation – an experiment which has obviously gone very wrong. 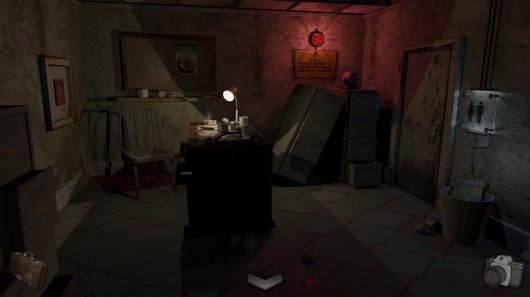 As you find new notes from Christina, she frequently references a friend named Phillip and how the tests have taken their toll on him. Each memo like the first is similarly numbered, but you’ll discover them throughout the facility in descending order, essentially meaning you get the story backwards. So while you can see for yourself the result of the company’s experiment, you have no idea how it all started, nor what it was even about. The suspense escalates as you progress, with John heading closer and closer to the source of the incident. It’s not quite Memento-level in how its reveals are handled, but the way these notes are curiously all left in plain sight, neatly tied up with ribbons, prompts suspicion. Blocked by logic puzzles or environmental blockades at every turn, this reversed correspondence manages to stir deep feelings of paranoia about what is really going on.

Unfortunately, Veritas veers sharply off the tracks in the final act. Given everything you’ve learned – or at least been led to assume – through the first four chapters, the inclusion of a late dramatic reveal is not unexpected. An emerging theme of memory manipulation suggests that both the lab and the supposed events which took place before John awoke may not be as they appear. However, the actual twist feels less like it’s earned and more as though the developer simply decided to lengthen the playtime with a  change of scenery without having to tie up the loose ends they spent the better part of four hours creating. The story goes off in a whole different direction in a brand new location, with puzzles strewn about for no particular reason. The telegraphed finale is weird, but it’s hardly satisfying, sensible, or surprising. Veritas ends up feeling like two halves of different stories, the first unsatisfyingly abandoned after a drawn-out and inconsequential break.

Individual chapters are separated by black screens captioned with quotes by Twain, Lennon, and other great thinkers, exploring the fragility and subjectivity of reality. These pauses are not just timely, they’re geographically strategic as well, with each new chapter adding to the facility’s collection of unique wings. The first block features the patient cells, with a guard post and electronic lock halting progress. Once clear of the prison ward, you can explore the lab proper, investigating interview rooms, laboratories, and even a children’s playroom. The recreation areas follow, with the ruined Veritas lobby and office spaces bookending the facility. Players are able to travel between these wings freely until the completion of Chapter 4, with subsequent events taking place somewhere else entirely, which I’ll leave players to discover for themselves. 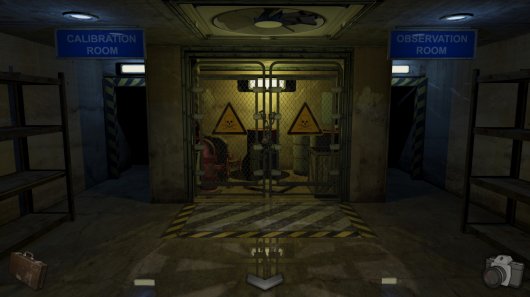 John will take note of his surroundings, commenting on objects and environmental cues via text running across the top of the screen. While some of these quips are insightful or funny, most are awkward, diminishing the immersion. John constantly cracks jokes, despite the fact that he is literally trapped in a laboratory from which there may be no escape. He shows no emotion when reading the notes from Christina or investigating the fate of his fellow test subjects. Instead, he’s sarcastic about the Easter eggs scattered throughout the game. Even though John isn’t voiced, Veritas would have worked better with a genuinely silent protagonist instead of one who seemingly refuses to take his situation seriously.

Helping make up for its struggles with tone is the game’s strong art design and haunting musical score. While hardly cutting-edge, Veritas’s pre-rendered graphics look quite good. Textures are detailed, giving the stark industrial backdrop an almost photorealistic look with its dilapidated plaster, plastic, and metal surfaces. Rooms are filled with bits of animation like flickering screens, whirring fans, and running water, so the facility feels abandoned but not lifeless. The music moves between gloomy and inspirational, with synth and piano notes swelling in the background, suiting the mystery unfolding perfectly. Ambient effects are sharp, with each door, computer, and machine having its own unique sound, while the short audio recording from Christina is the only voice acting to be heard.

Veritas is played entirely in first-person slideshow fashion. Hover the cursor over the part of the room or object you wish to move to or interact with, left-clicking to move forward and right-clicking to back up. It’s a simple, intuitive control scheme that allows for quick circumvention of the lab environment. The space bar takes a photograph for viewing in the in-game photo album, and John’s inventory can be pulled up by moving the cursor to the bottom of the screen. 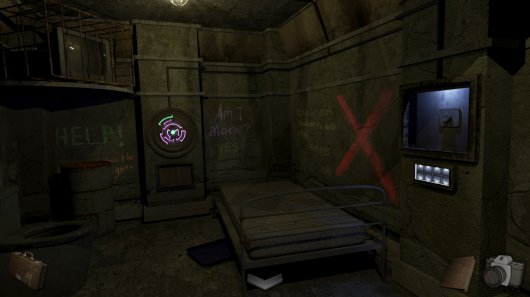 When I first started playing, I was asked whether or not I had ever played a Glitch Games adventure before. As I had not, a hint system was turned on as a result of my answer, though this feature can be turned off at any time. When active, the game presents a series of pictures (referenced via the Hint option in the pause menu) of places or things that need to be attended to in order to progress. It also highlights points of interest with a sparkling sheen, letting you know exactly what can be interacted with in any given room. This system, while more suitable for inexperienced or casual game players, is handy to have, directing you without giving any actual answers away.

One of the game’s core mechanics is snapping pictures of the environment. Once discovered, the camera is a helpful tool throughout. You can keep photos for as long as you like, which is handy seeing as some puzzles span multiple wings of the facility. Even just as a digital notebook, the camera is incredibly useful for keeping track of clues without having to backtrack or make notes/drawings of your own. However, you also have the ability to manipulate your photos by drawing on them with digital markers, which can be instrumental in arriving at certain puzzle solutions.

You can inspect, interact with, and pick up objects according to predetermined triggers. Puzzles range far and wide in their design, including stationary knob and dial challenges, password decryption, and item combination. Some puzzles are investigative in nature, tasking you with deciphering information in order to access a lock code or computer system, while others are environmental, presenting objectives like stopping a leaky pipe or lighting a dark corridor. Almost every room has some sort of problem to be solved. It’s almost overwhelming, but thanks to the sensible pacing and design (and hint system, if you need it), it’s never hard to string together what needs to be completed in order to move on. 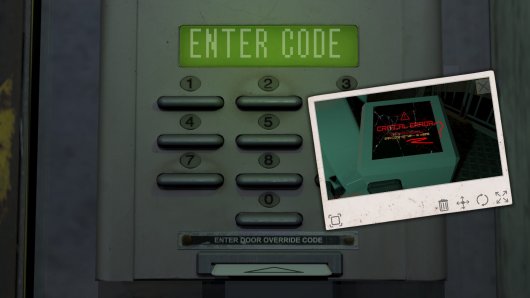 That’s not to say that the puzzles are easy. In fact, their solutions may even seem illogical at first, with clues conveyed through the activity area on the back of a discarded cereal box or a group of snooker balls, for example. Clues aren’t immediately obvious, but pay enough attention to seemingly inconspicuous objects in the environment and you’ll begin to make the proper connections with the puzzles to which they’re linked. What makes this work is the rat-in-a-maze setting: you’ll feel as though this convoluted facility was left precisely as it was in order for John to work his way out.

I did find myself at wits’ end a few times, resorting to a walkthrough for clarity and usually following with a deep, regretful sigh at how painfully obvious the answer should have been. I was never at a loss because of cryptic objectives; rather, I just failed to piece the necessary parts together. While rarely straightforward, the challenges here are always fair. 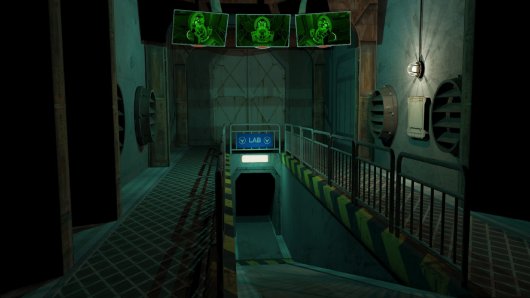 Unfortunately, a few mechanical shortcomings can lead to frustration. There were two puzzles which, though I was sure I was doing them correctly, I had to double check via walkthrough to confirm that my suspicions were correct and the game was failing to register my input. One was a tracing puzzle and the other a sequential button combination, which caused quite a bit of aggravation as I struggled to get the game to recognize button presses, forcing me to repeat the process several times until the inputs triggered correctly. I also experienced a number of glitches where I would consistently be pushed away from a panel or object I was trying to interact with. The inventory screen also disappeared from time to time. These bugs could all be remedied by pausing and unpausing the game, or by restarting it entirely, but they were nevertheless frustrating.

Overall, Veritas is an atmospheric puzzle-adventure that is both challenging and rewarding. Glitches dampen the experience, as do the inconsistent tone and underdeveloped story in the second half, but even with its shortcomings it is well worth playing. It’s a game aimed at genre veterans in terms of difficulty, but less experienced players shouldn’t be intimidated thanks to the helpful (but optional) hint system. Veritas doesn’t do anything that hasn’t been done before, but for the most part it handles its suspenseful captivity tale and head-scratching puzzles well enough to stand as one of the better first-person puzzlers of late.

In spite of some technical hiccups and a half-baked plot, great pacing and puzzle design make Veritas an easy recommendation for veterans of the puzzle-adventure genre.

GAME INFO Veritas is an adventure game by Glitch Games released in 2020 for Android, iPad, iPhone, Mac and PC. It has a Illustrated realism style, presented in Slideshow and is played in a First-Person perspective. 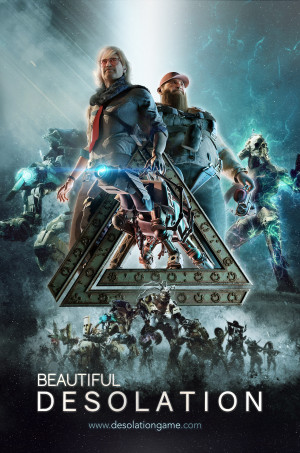 What our readers think of Veritas