A Fold Apart feels a lot like what you'd get if Pixar decided to make a game about love and long-distance relationships and...folding paper? Bursting with gentle charm, it tells a relatable story with an endearing, handcrafted art style and emotive music that'll stay with you long after its brief runtime is over. The puzzles, too, are novel and challenging enough to be interesting without breaking the flow of the narrative. Some technical rough edges and awkward controls create a little friction, but these are more than overcome by the game's underlying joy and heart.

It's a familiar tale for anyone who has ever been physically separated from a loved one for an extended period: a Teacher and an Architect meet and fall in love, only to have their perfect happily-ever-after rocked when the Architect is offered the commission of a lifetime in a far-off city. It'll be tough, but it's such a great opportunity and it won't be forever, so the couple say their tearful farewells at the airport and board the emotional roller coaster of long-distance romance. The problems start first with a few misunderstood text messages, and then some changing circumstances put them both under strain as they navigate their way through personal thoughts and emotions as well as the tricky paper-based dream worlds their respective paths take them to. Will their bond prove strong enough to see them through?

If you're wondering about all this talk of professions rather than pronouns, it's because both the lead characters' genders are up to you, selected when you start a new game. The differences are purely cosmetic – none of the gameplay or dialogue changes – but it's a nice, inclusive touch. The protagonists themselves feel like refugees from Inside Out, with the Teacher, all curves and shades of red, contrasting with the Architect's square blue look. They also live in different worlds, the Teacher's being full of sunshine, bulbous green trees and birdsong, while the Architect's is populated by square, blue-grey buildings lit by moonlight. 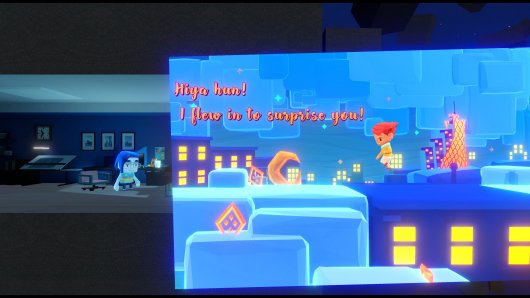 You might imagine, given the paper theme, that these worlds would be hand-drawn, but instead they're rendered in a simple, low poly art style that's full of bold colours and quirky angles, like highly polished versions of children’s drawings. A gently tinkling piano score underlaid by slow strings is at once a relaxing and emotionally charged accompaniment, mirroring the characters' angst.

The frames of the unfolding story are represented as sheets of paper scattered across backdrops such as a desk (for the Teacher) or a roadway (for the Architect), with the characters moving freely from one page to another. In the real world, our lovers message each other about everything from getting lunch and adopting a dog (called "Princess Pupperpants") to dealing with lonely evenings in front of the TV. These messages scroll up the screen, following them as they walk, until one gets lost in their thoughts and steps off into their own dream world. Here the scenes continue to be based on real life but also reflect the character’s inner turmoil, with neat text message bubbles replaced by thoughts writ large across the sky in bold cursive (Teacher) or rigid sans-serif (Architect). They never speak as such, but there's really no need and indeed it would probably have broken the mood.

These symbolic environments are also where the puzzles reside. No longer appearing on plain ordinary pages, these scenes are painted on magical paper showing different worlds on front and back, with platforms, boxes and other obstacles on each side. The goal is either to reach a great big golden star or simply find a way off the current page and onto the next by manipulating the backgrounds themselves. In the early stages, this could (for example) involve folding the paper horizontally so as to line up a platform on one side with a different platform on the other, enabling you to walk across. Sometimes this may take multiple folds, and sometimes (rather alarmingly!) you have to fold the paper from top to bottom, turning your poor hero upside down so they fall down onto a lower platform. Thankfully, after looking a little dazed for a moment, they always sit up and dust themselves off, none the worse for wear. 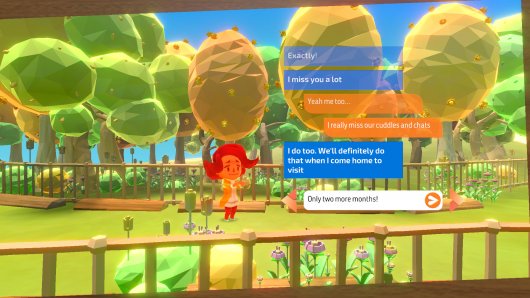 That may sound pretty confusing, but it's all introduced very naturally, as the Architect nods off at their desk and is enticed out onto the rooftops by the Teacher, floating outside the window and swooping around like Tinker Bell. Sides of the paper you can fold sparkle blue, encouraging you to click and drag them into place. Folds can by undone with a simple keystroke, while others flip the paper over horizontally. Later on, you'll encounter boxes that can be pushed around or clambered onto to reach new places, and also gain the ability to rotate the paper. There's a nice difficulty curve, with new options being inserted just as you feel you're getting the hang of the current ones, providing enough challenge to keep things interesting without leaving you stumped. The pacing of events feels like they are as much about giving you time to reflect on how the character is feeling as actually making you think. If you do get stuck, hints are on hand to unstick you, but these take you through the solution step by step, so be sure you need them before you click.

While gamepad support is available, one minor frustration on PC is that without one everything besides folding is managed with the keyboard. The keys are remappable, but there's no option to rotate with the mouse, for instance, and you move around with the A and D keys rather than a click. Rotations are a bit clunky to achieve, requiring you to press one key to enter rotation mode, another to rotate the paper in 90-degree increments, and then the first key again to return to folding mode. It's all perfectly workable, just a little cumbersome and fiddly. And speaking of technical issues, I also ran into a few spots where either the paper glitched out, going blank or moving partly off-screen, or the game temporarily became unresponsive. This was generally at times when I'd made more complex folds than the scenario actually required, though, and resetting the level fixed it. It didn't happen often enough to be a real annoyance, but I hope the developers find a way to fix these problems.

As someone who's had more than his share of long-distance relationships, I found the story came across as simple but heartfelt: our two lovebirds' experiences ring true, and while they are a tad overwrought at times, they never tip over into melodrama. Even something as simple as unfortunate wording in a text can send them off down a rabbit hole of self-recrimination and worry about the future. Do they want the same things? Will the Architect want to come home, or expect the Teacher to move to the city? Can their love survive the time apart, and is it meant to be in the first place? What should they say, how should they feel? With only the limited connection of messages available, it's all too easy to misunderstand or read too much into a throwaway phrase. 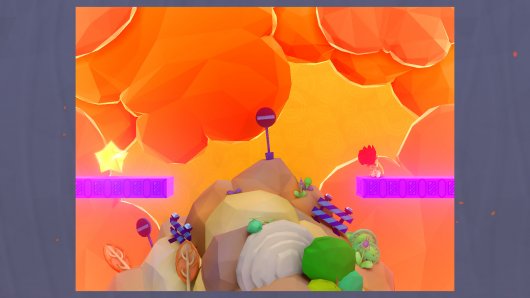 This inner turmoil is expressed by the world around them, but so too is the love and commitment that bind them together, with earthquakes and rainstorms giving way to the green shoots of hope as they work their way to a resolution and back to reality to finish a conversation. The Teacher's heartache manifests in the form of broken traffic lights that block the way, while the Architect stands on boxes with hearts on the sides to make progress. Every scene is a step in the story, and at times the characters will stop to simply sigh or look meaningfully into the distance.

Given the intensely emotional tone and carefully crafted story, A Fold Apart wisely doesn't overstay its welcome, wrapping up its six chapters in around three hours. Even though there are plenty of puzzles here (more than fifty), that time passes quickly and easily, leaving you with a warm, fuzzy glow rather than a headache. If there's a downside to this, it's that the characters never really have the chance to progress beyond romantic stereotypes and develop their own personalities. But that's okay: they're quirky and cute in typical ways, struggling with the kinds of relatable issues you'd expect, and this is meant to be a pleasant diversion, not an epic deconstruction of the human condition.

Ultimately, A Fold Apart pushes players through life’s trials and despair to take us to a happier place – a place of warmth, sunshine and love – and that's something we all need sometimes, especially in our current circumstances. The game’s stylish looks, soothing soundtrack and emotional story definitely take centre stage here, and they're all polished to a high shine. The plentiful puzzles are the backing band rather than the main event, and may prove too easy for some, but they're likewise full of charm and interesting ideas. Occasional technical problems and slightly awkward controls take the shine off just a little, but are easy to forgive when the rest of the experience is this endearing. It's just the ticket for anyone who needs a break and a chance to enter a world that, for all its adult problems, is so playful and full of wonder.

Short but very sweet, A Fold Apart is a hug in game form that’s sure to warm even the hardest of hearts.

What our readers think of A Fold Apart