Whispers of a Machine review

What would happen if Ridley Scott’s cyber cop Rick Deckard found himself supplanted from his dystopian Los Angeles to a rural outpost in the middle of nowhere? Or if the Coen brothers’ Marge Gunderson was transported into a tech-noir future to investigate a string of murders? The answer to both is Whispers of a Machine, a collaborative effort from a pair of indie developers with proven pedigree on their own, Clifftop Games (Kathy Rain) and Faravid Interactive (The Samaritan Paradox). Although the narrative of this murder mystery may be a bit too brief to land all of the emotional punches it attempts to throw, it still successfully explores engaging themes like religion, morality, and technological apartheid in a world struggling to return from the brink of apocalypse, and along the way brings an intriguing freshness to the tried-and-true point-and-click formula that’s well worth experiencing.

The game sees players take on the role of federal homicide detective Vera Englund, who’s been sent to the remote outpost of Nordsund after a brutal murder has stumped the local constabulary. Arriving just in time to examine a second, more recent murder, Vera realizes that she may have been set on the trail of a budding serial killer. Her investigation into the two deaths ultimately sees her caught amidst opposing factions in a war of ideologies, testing her professional intuition as well as pitting her against her own personal demons.

Whispers is a third-person point-and-click adventure as traditional as they come in most respects, but it also introduces elements of choice and several unique mechanics that aid in the analysis of crime scenes and interrogation of suspects. While a contextual cursor lets you examine, read, pick up, and interact with objects in the environment (with the aid of an optional hotspot indicator when necessary), it’s the protagonist’s special augmentations that inject a great deal of variety into the case. 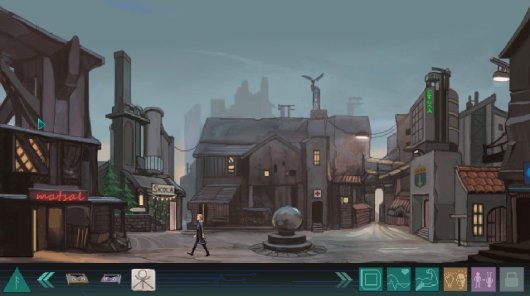 In this futuristic world, a specially developed nanofluid substance dubbed “Blue” – highly illegal to anyone not enjoying special governmental status but accessible to Vera as a federal agent – infuses living tissue with tech-assisted abilities. This enables Vera to scan her environment for clues like fingerprints and DNA signatures, read biometric inconsistencies in subjects she’s questioning, and even offers her muscles a temporary extra boost of strength. The addition of these elements really drives home the feeling that you’re not just clicking on objects but truly investigating. The simple act of locating a victim’s locker in the game’s first scene, for example, requires scanning his body to log his biometrics, then tuning your scanner to pick up his fingerprints specifically, and once the correct locker is located via the prints, ripping it open with a boost of strength.

While the initial loadout of three augments are available to Vera at the game’s outset, over the course of the story new powers continue to manifest within her, reacting specifically to your choices when interacting with others, essentially opening up different augments depending on which path Vera is traveling down. Treat others with empathy, for instance, and Vera will receive the ability to give machines and people around her a brief spark of energy; behave in a more analytical or assertive manner instead and different enhancements become available.

Not only does this allow gamers with differing play styles to solve problems in unique ways, but sometimes in-game puzzles themselves lead to tendency shifts depending on how they were overcome, such as passing a fingerprint scan: it’s entirely possible to create a rubber mold of a finger to fool the scanner, or simply amputate the digit itself to gain access, each solution pulling the behavior index in one direction or another. Players dedicated to role-playing Vera another way will get some further replayability from this system, as different augments force unique puzzle solutions. 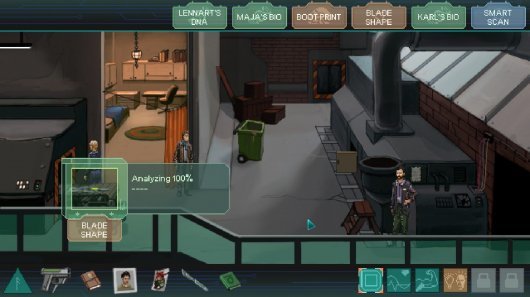 As the game unfolds, there are a good variety of puzzles to contend with, all naturally woven into the mystery. Inventory-based roadblocks are of course present to challenge your ability to think outside the box, but it’s – again – the puzzles that play on Vera’s nanofluid augments or your own ability to deduce answers from clues discovered that stand out. In order to access a computer terminal early on, it is necessary to not only be thorough in your search for clues, but also to carefully pore over the available data to decipher the hints contained within. Whispers does a great job of staying challenging without becoming frustrating.

Progressing through the narrative will send players down several side tracks running simultaneously with the murder investigation. As Vera uncovers motives and learns more about the suspects and victims involved, so too does she become entwined within a more human drama of clashing belief systems, of human evolution versus software upgrades, of organic versus artificial, and the question of which Big Brother is the lesser of two evils: man or machine?

Likewise, backstory about the world itself – the events in the past that have led to society’s departure from advanced A.I. development – is revealed little by little, as is Vera’s personal background and the private struggles she’s gone through in her past. Arriving in Nordsund with a single memento of home – a photograph of a significant other and the emotional baggage that goes with it – Vera eventually proves the susceptibility of the human condition that makes true impartiality an impossible notion. 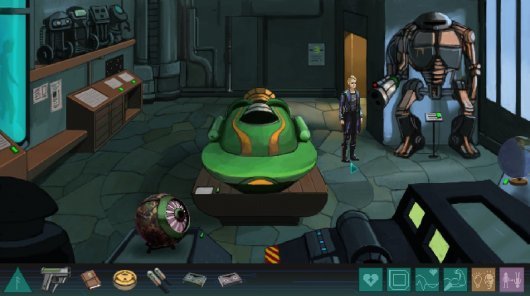 While these facets help flesh out the world, the game’s  4-6 hour play time has some difficulty giving all of them the attention they deserve while still keeping a spotlight on the investigation at hand. In fact, after some excellent early pacing focused on revealing the murder plot, the game shows its hand surprisingly suddenly, almost rushing to a conclusion a bit prematurely. As a result, certain emotional aspects of the story don’t hit home as hard as they were likely intended to, and the ending, while cleanly putting the case to rest, didn’t leave me particularly satisfied. Like the artificial consciousness the story revolves so much around, there’s something almost mechanical about Vera that kept me from truly connecting with her or her plight.

The game’s visual presentation is very well-executed, somewhat unusually blending more painterly backdrops with pixel art characters and foreground elements. While I was initially a little on the fence about the smooth backgrounds, the end product does mesh together nicely. From a design standpoint, locations that showcase the low-tech future setting are particularly noteworthy: the game’s opening reveals Nordsund as an elevated settlement, suspended on a giant disc high above ground, while within town the police chief’s office features a private built-in greenhouse and the local museum is full of “antiquated” displays like hovercraft and laser-gun-wielding law enforcement robots. The majority of locales feature simpler decor, however, without much indication of the game’s futuristic setting.

Character models benefit from detailed dialog portraits that appear during conversation to show much greater expressiveness. Animation is fluid as well, with enjoyable flourishes paying off Vera’s augments, like a metallic latch flying through the air after brute forcing a storage locker open, or a visible spark of energy traveling up an IV tube in order to revive an unconscious patient. 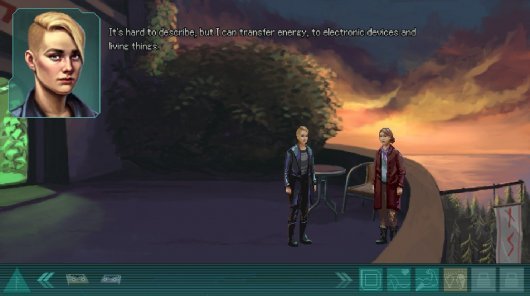 The sound design is equally enjoyable, stopping just short of outstanding. Quality voice work, for the most part, boasts a leading role performed by Ivy Dupler, surrounded by other strong characterizations in the supporting cast. The instrumental music features both melodic and dissonant tracks, the latter evoking the same odd anachronistic feeling as the setting. Generally, though, the score is willing to remain in the background and not get in the way of the voice acting, instead simply providing a suitable backdrop for any extended investigative sections.

After the successful first outings from both developers individually, there was every reason to anticipate good things from a game that saw them join forces. And indeed, even with the greater expectations that came with it, Whispers of a Machine does not disappoint. It’s perhaps a bit too short to do its ambitions full justice, but with strong presentation values, a largely compelling mystery to solve, and praiseworthy spins on traditional point-and-click gameplay, it’s a highly enjoyable experience with a level of replayability and an interesting world that I hope will be further explored in future projects.

Clifftop Games and Faravid Interactive show no sign of a sophomore slump with Whispers of a Machine. This futuristic murder mystery with some innovative gameplay, flexible puzzles, and built-in replayability should be enough to pique any adventure gamer’s interest.

GAME INFO Whispers of a Machine is an adventure game by Clifftop & Faravid released in 2019 for Android, iPad, iPhone, Mac and PC. It has a Illustrated realism style, presented in 2D or 2.5D and is played in a Third-Person perspective. You can download Whispers of a Machine from: We get a small commission from any game you buy through these links.
The Good:
The Bad:
The Good:
The Bad:

What our readers think of Whispers of a Machine 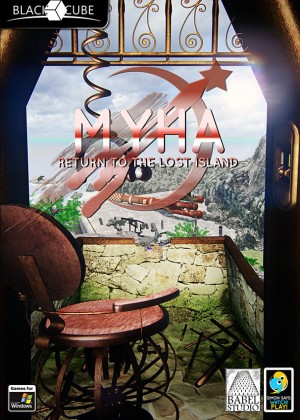