Those of us who grew up with the earliest graphic adventures look back on them fondly – probably with a rose-coloured view of games with finicky parsers, sudden deaths and dead ends, and numerous others design frustrations that one can only laugh at today. These issues are so hilarious, in fact, that artist Robert Penney decided to lovingly spoof them as part of his brilliant Fictional Bad Games videos. (Other genres are riffed as well, but let's face it: the adventure games are the best.)

As part of our increased focus on video content, we have teamed up with Robert to help promote his incredible series. Just watch and you'll know why even made-up rotten games can make for most enjoyable viewing! But who is the man behind the mayhem? Read on, as we are pleased to offer a glimpse behind the scenes into Robert Penney's world.

Ivo Teel: Hi Robert, thanks for taking the time to do this interview with Adventure Gamers! For the people that don’t know you, can you briefly introduce yourself and explain what you do?

Robert Penney: I’m a freelance graphic designer by day operating as Penney Design, and mostly enjoy working on album art and general music-related content. I create pixel art projects on the side for fun. All that stuff is separate and falls under the umbrella of Penney Pixels. Aside from the Fictional Bad Games series, I recently collaborated with programmer Carleton Handley and made a pixel art app Very Iconic Pixels: ‘80s Edition. It’s a quiz to guess celebrities from the 1980s from animated pixel art sprites.

Ivo: You've done several videos that feature point-and-click adventure games, including a spoof of Space Quest as Jurassic Quest, and the recent Indiana Jones and the Kingdom of the Crystal Skull. What was your inspiration to start Fictional Bad Games?

Robert: Back in 2010, I created a project called Retro Games With Modern Themes. It was essentially a precursor to Fictional Bad Games in terms of imagining what modern movie-licensed video games would look like on older video game systems. They were only mock-ups of the box art and I’m not particularly proud of them now, although one was a point-and-click spoof of the TV show Lost. I wasn’t particularly worried back then about the little details like using the correct palettes or resolution, but hopefully I’ve grown since then!

Many years later I realised the potential of bringing them to life in video form, through the popularity of "so bad it’s good" Let’s Plays on YouTube, such as Angry Video Game Nerd and Game Grumps. I have memories of owning Back To The Future III on Sega Master System when I was about eight. It was only three levels but they were all ridiculously hard, as if to make up for how short it was. My child mind couldn’t understand how a great movie franchise could have a bad game associated with it. It was a nightmare to play. But you can watch someone play a terrible game from a safe distance and enjoy it purely for being a train wreck. So I thought it might be fun to take some inspiration from real ‘80s and ‘90s video game annoyances – glitches, poor understanding of source material, astronomical difficulty – and apply them to an alternate universe where today’s film and TV existed 30 years ago.

This isn’t true for the point-and-click adventure game spoofs I made however. I always thought they were great back in the day and didn’t want to seem like I was down on the genre. So instead I opted to create Jurassic World as a game that was perhaps made by a Sierra rip-off company who didn’t quite understand what they were doing. I’ve actually never played Space Quest before but was always aware of it and loved the visual style of The Colonel's Bequest. I knew some people loved to hate the constant and often unavoidable deaths in those games, so I made my Jurassic Quest video ‘terrible’ by amping that up to an unbelievable level. The Stranger Things point-and-click was similar. You usually have to fumble around a bit in adventure games to do certain things, such as not being close enough to an object before interacting with it, etc. So I wanted to take that to a ridiculous degree to the point where you know that the game can tell what you’re trying to do but is making you jump through hoops as if to be spiteful. The concept for my adventure games were "so you like adventure games? Well, you won’t like these!"

Ivo: How do you come up with your game concepts?

Robert: By thinking about what the main joke of the video will be. I try to be as visually accurate as possible but the humour in the videos is the main point. I don’t make them just to imagine what some modern movie would like as a retro video game. I hope to make people laugh first and foremost. I’ve noticed people nit-pick small things, pointing out the videos clearly aren’t real because some colours are slightly off or the resolution is wrong, but they don’t seem to take issue with characters breaking the fourth wall by being aware how far through the YouTube video you are. There is even a scene in the Jurassic Quest video where the main character walks off the screen into the literal YouTube interface, which I thought would have been a pretty big clue that it's fake! I also really like including little hidden messages or jokes that are in only one frame or so. Most videos have at least one, and so far many have gone by unnoticed. 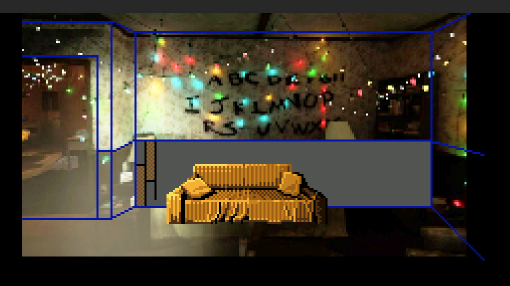 Ivo: Could you walk us through the creation of an episode like this? What tools do you use?

Robert: I initially start by finding as many references as I can from similar games of the time and work out what colour palette I’m going use. Colours come into it more than you’d think, as I want to be true to the era and capabilities but also make every sprite as readable as possible. So if a character has black hair on a black background, I have to have a rethink. From there I go straight to Photoshop and start with the background. I don’t have any programming skills whatsoever, so everything is purely animated. I’m often asked if I use After Effects, but I know for replicating old video game systems that Photoshop frame animation is more realistic. After Effects is a bit too smooth for my liking. This way I have complete control over what is happening in each frame. If I need to scroll the scene, I will extend it beyond the initial frame so then I can simply move the background layers to simulate motion, with separate character walk cycle layers on top.

After the scene’s done, the animation is exported as a video file and imported into Premiere where I overlay effects, distortions and sound. Music is always done last, and I often make Chiptune music in Logic Pro and try to make it bad, but not bad enough that it’s unlistenable. At least I hope. The most tedious part of the whole procedure is adding sound effects, as I have to go through the video, pause it when I see an action that warrants one, and throw it in Premiere. I’ll usually export it and realise I’ve missed one, or it’s a split second off. Any minor mistake means re-exporting the whole thing!

Ivo: What are some of your favourite adventure game artists? Did you immediately know which games you wanted to base spoofs off?

Robert: I’ve watched other people play the Laura Bow games on YouTube as I love the Agatha Christie-style mood of them, but I’m ashamed to say I’ve never played them myself. I grew up on all the Monkey Islands, Indiana Jones point-and-click games, Day of the Tentacle, Maniac Mansion, Full Throttle, Hugo's House of Horrors, Sam & Max Hit the Road and probably more that I've forgotten at the moment. I picked the EGA style graphics as it would be quicker and easier to animate.

Ivo: Did you get any responses that stood out to you? Any of the original creators?

Robert: I got the attention of David Fox and Ron Gilbert back in 2010 or so and I stayed in contact with David. He worked on the 1989 Indiana Jones and the Last Crusade game as well as many others. I made sure to contact him before releasing the Indiana Jones and the Crystal Skull video to assure him I was making fun of the Crystal Skull movie and the concept of being forced to play as Mutt instead of Indy. An alternate universe where LucasArts had to make an adventure game from a movie that many people didn’t even like and therefore had to stick to that storyline. He later tweeted the video out so I worried unnecessarily!

Ivo: We've seen spoofs of both Sierra as well as LucasArts adventures, highlighting their unique styles. What really stands out for you in the original titles?

Robert: I always loved the stories but mostly I appreciated the dry sense of humour in them. I made sure to borrow some of that in the Crystal Skull video. For example, a nuclear bomb is about to go off in the game but you are free to look around at toasters and out windows before trying to save yourself. The art was always stunning in those games too. That is why I always want to emphasise that the adventure game spoofs I made are presented with respect to the genre, and the ‘80s platform movie tie-ins are a jab at the corporate cash-ins that they used to be.

Ivo: What future plans do you have for Fictional Bad Games?

Robert: I currently don’t have anything lined up. I’d rather have a decent idea and spend time making it rather than upload regularly and feel that I’m not happy with it. I see myself revisiting the adventure game genre as they’re fun to make and people seem to enjoy watching those ones the most, but the idea and overarching joke would have to come first!

Ivo: Thanks a lot for taking the time. We look forward to seeing more Fictional Bad Games videos in the future! As part of our collaboration, we'll be highlighting these for our readers on Adventure Gamers! 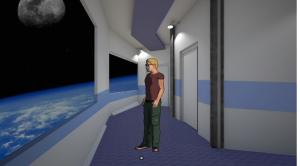