We get a small commission from any books sold.
All Bitmap Books
Written by
Merlina McGovern — August 3, 2015

A gruesome scenario awaits you right away in Relentless Software’s The Trace: A man lies prone; crushed to death by a car lift, apparently by his own doing. In this mobile exclusive (played for review on iPad) with a body count that quickly piles up high, you must swipe and tap your way around a variety of crime scenes attempting to piece together clues to determine how each grisly crime came about. Though light on challenging puzzles and lacking in voice acting, The Trace places a fun focus on the use of exploration and well-integrated inventory puzzles to whisk you through an engaging, if predictable, murder mystery.

In this first-person adventure you play as Sam Pearce, a lead investigator for the Baltimore Police Department. You’ll begin by leading Sam through his investigation of a call into an apparent suicide. Exploration involves visiting discrete photo-realistic screens (quite unlike the developer’s cartoony Blue Toad Murder Files) where you can look around 360-degrees as well as up and down by swiping your touch screen. Tap on a particular area of the screen and you’ll move forward, further into the room (though there are no visual cues to indicate when you can do this). For the most part these controls are fluid, but there were a few times where I would swipe, tap, and move too far past an area that I wanted to visit or would spend a few moments attempting to get into a corner that it wasn’t always clear I couldn’t actually reach.

The swipe-and-tap mechanic will often pan the camera around, which can lead to sudden encounters with startling images. Early on, Sam swings right into the victim’s body in the garage at Oakley Classic Cars. You can then tap to get closer to the body or look around the car lift and the rest of the garage. Tapping the screen at times allows you to zoom into an area for a closer view, and pinching it lets you zoom back out. Often you’ll have to swirl objects around with your finger or conduct short swipes up and down, say, to open a door handle or unscrew a screw. You can also tap to pick up objects, which then stay in your inventory, though you’ll never carry around very many things. 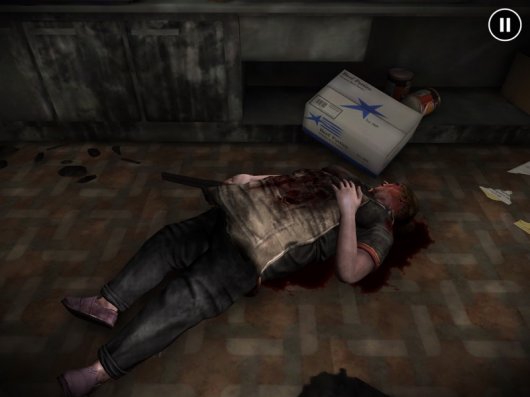 Your investigation will eventually take you from the car store and garage to a family’s suburban home and into the exploded remains of a diner. Along the way you’ll learn about (though never meet face to face, as they are either away, missing, or dead) the victim, the car dealership owner, his daughter Linda and her health nut husband Hank, Joey a mechanic with a shady past, Freddie an ex-con, and Madge, a tough old bird that works at the diner. You’ll interact with only a few characters, such as Alex, your partner at the police department who will help you analyze clues, and Hank, who you’ll briefly talk to over the phone.

As you explore the crime scene, a light layering of piano, a bit of distortion, and a wailing guitar make repeated appearances. The music plays fairly often, adding some nice ambiance, but there is no voice acting at all. The few conversations you have are handled via typed-out dialogue, which can make the experience feel a bit quiet and lonely.

You’ll get plenty of internal monologue, however, thanks to the many observations that pop up on screen when you tap on hotspots. Tap on the murder scene, and when Sam ruminates you can almost read the world-weary tone in his words: “Crushing your own head with a hydraulic platform? Hell of a way to go.” There are a variety of visual details you can click on that will give you a fuller picture of the area and the people that you’re investigating. The mechanics at Oakley Classic Cars love their junk food snacks and pepperoni pizza. And some even like a little nip of something with a bit more bite during the day, you’ll learn, as you peruse their personal belongings. A nice suburban home is spic and span and filled with healthy foods and healthy lifestyle magazines. But there’s also a stash of chocolates and snacks – oh, self-discipline takes an occasional break for even the most rigorous health addicts. 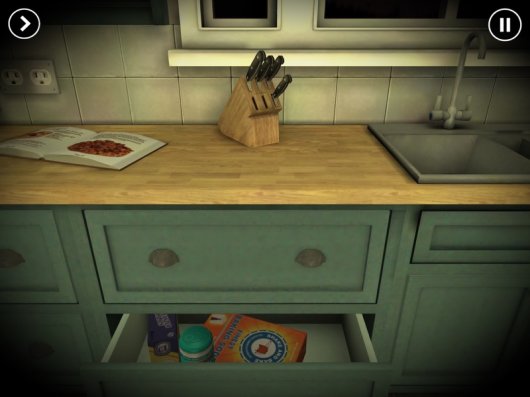 Your objectives, as with any detective job, are to gather clues and examine them for traces of the story you’re trying to uncover. Here you’ll get a forensics toolkit, which is mostly just a button you’ll tap when you’re examining an object of interest to turn on a UV light or a scanner that will scan textual information or other, more sinister, objects like blood. You’ll need to turn items over and around so that you can examine every angle of the object to find traces of prints, fluids, or any other details that could provide you with vital information. If there are multiple clues to be found on the object, the game helpfully indicates how many clues there are in total, as well as how many you’ve already discovered, letting you know if you haven’t quite finished your examination yet.

The game is broken up into three chapters, and each chapter contains a series of leads that you’ll have to fully flesh out in a dedicated interface. You’ll gather a large number of clues in each chapter, so the challenge lies in assembling the right clues with the right lead. For example, if you stumble upon a lead that asks you how a dog may have made its way into a house it didn’t belong to, you’ll scroll through a list of clues you’ve gathered and drag over those you believe will answer that particular question. The game provides you with a simple feedback system telling you how many of the clues you’ve assembled correctly for a particular lead. Once you’ve correctly connected all of the clues for a lead, you’re rewarded with an animated re-enactment of Sam’s hypothesis. The re-enactment shows dynamic camera movement, but the actors in the scene are all frozen in time – a nice design choice, as if you’re moving around a trace memory of the crime. Solving all of the leads for a chapter moves you to the next one. 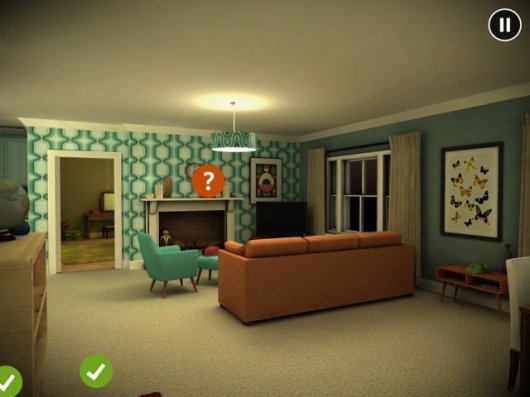 Many of the clues you’ll locate simply by exploring your environment. At rare times you’ll have a puzzle added in, but they are all logical and very well integrated (if at times a bit on the easy side). Jigsaw puzzles aren’t just thrown in at random; you’ll be piecing together torn-up notes or items broken during a struggle. There are a few lock puzzles, but the solutions are all fairly easy to acquire, which was one of the game’s downfalls for me. One of the solutions was laughably easy, with the answer scrawled right next to the puzzle. It would have added at least a little depth to require a bit more investigation to solve these few lock puzzles.

Even with so little challenge, The Trace is a fun game throughout its three hours of play time, as you never know what will be around the corner: perhaps a clue, or perhaps a dead body. The explorations are so well integrated and fluid that the game moves smoothly from scene to scene and chapter to chapter. I rarely felt pulled out of the moment or stopped artificially by a random logic puzzle or bizarre inventory combination. And while the solution to the overall mystery is a bit on the predictable side, as the plot is a standard trope that is fairly common in murder mysteries, the journey to get there is quite enjoyable. If you’re in the mood for a solid murder mystery that makes great use of the swipe and touch functionality of mobile platforms, you’ll want to make sure to investigate The Trace.

The Trace is a brief and easy but fun exploration-filled murder mystery that will have you engaged from beginning to end.

GAME INFO The Trace is an adventure game by Relentless Software released in 2015 for Android and iPad. It has a Illustrated realism style, presented in Realtime 3D and is played in a First-Person perspective.

What our readers think of The Trace