Review for The Wolf Among Us: Episode Five - Cry Wolf

I can’t describe reviewing the five-episode season of The Wolf Among Us as anything but exhausting. Telltale’s episodic adaptation of Bill Willingham’s fantastic Fables comic series has been a roller coaster, starting with so much momentum and promise and then ambling through multiple moments of storytelling gridlock and a couple episodes that were bland, at best. Thankfully, the final episode Cry Wolf is an exhilarating, puzzle-free and action-heavy blow-off of energy, allowing the player to inhabit the role of the heroic Sheriff Bigby Wolf in the most meaningful way yet in the series—and waiting until the final moments to make a real mystery out of the game.

The prior episode ended abruptly as Bigby finally entered the lair of the villainous Crooked Man, with an entire season’s worth of henchmen gazing at you with menace in their eyes. A lot of tense conversation ensues, and eventually it appears the specific perpetrator of the murders we’ve been trying to solve all season is revealed. Once the scene reaches this point of the lit fuse, you’ll find yourself balancing a thirst for justice with the understanding that you can only escalate this situation so far. Ultimately of course, it all ends violently after a super-creepy, brilliantly framed entrance by Bloody Mary, without question my favorite villain of the season in her limited role. But the intensity of the scene leading to the violence is ratcheted way up thanks to great writing and absolutely fantastic voice acting and direction, and it’s hard not to walk away from it wondering if you could and should have handled it better.

The violence only amplifies from there—things get worse in a hurry as you track down your final answers to solve the murders of Faith and Lily, and you’ll find yourself having to make some very ugly decisions about the fates of a couple enemies. The gore factor in these scenes is off the charts; this hasn’t been a series for the faint of heart in any manner, but the cake is taken by Bigby’s “mercy kill” should you choose such a path. 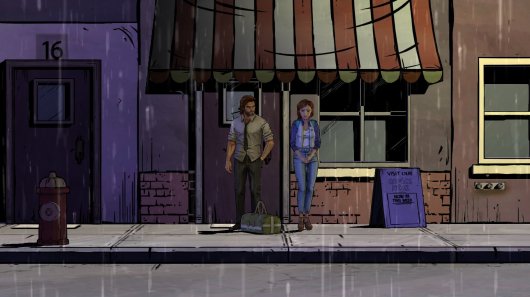 That behind us, it looks like we’ve got all the information we need. Now it’s time to hunt down the Crooked Man, tracking him to a giant warehouse. Before we can reach the “end boss” though, there is one more set-piece fight to play through, and it is a doozy as Bloody Mary finally reveals her grotesque, horrifying true nature, leading to a capstone fight that finally pulls Bigby Wolf into his true Fable form. This confrontation ends in a final explosion of victory (one perfectly appropriate to Bigby’s Fable origins) that could be described by a cynic as cheesy fan-service, but had me literally cheering out loud.

This giant, satisfying brawl with Bloody Mary is an action sequence, and there’s no sense dancing around that fact while writing a review for an adventure gaming website. It requires quick, relatively precise aiming and clicking of the mouse, and occasional quick WASD dodging. It’s not as though there’s an ever-present life bar, and it’s pretty hard to die—but to feel like you’re winning the fight at all, you’ll need better reflexes than anything required in a Telltale game to date. I would imagine if you haven’t made peace with that, you probably haven’t made it this far in the series, but this game’s full embrace of action elements should be addressed.

After the breathless fight, I’ll refrain from further spoilers other than to mention that the game’s final 15 minutes, which are action-free and solely driven by dialogue options and choices, contain some really significant and meaty choices that get back to the heart of what playing the character of Bigby Wolf should embody: the deep shades of grey between dishing out swift, violent justice as judge and jury, and addressing the criminal element of Fabletown with a fairness and adherence to lawful conduct that any noble sheriff would. You can choose what your Bigby will do, and the final such decisions resonate with a nuance that I really appreciated. 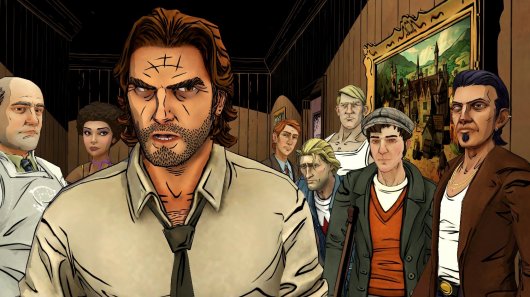 Good thing too, because it sure takes its time getting there—the series has had a tendency all season, but specifically in the last two episodes, to overwrite itself, presumably to cover up the absence of actual gameplay while making sure the episode playtime didn’t slip to under an hour (I clocked in here at 85 minutes, getting me just over six hours total for the season). Particularly, the dialogue in the game’s extended final group conversation sequence—though well-written and certain well-acted—moves forward very deliberately with lots of characters saying lots of things and not a whole lot of urgency toward the crux of the scene. At times, I almost wished for a “needless violence” option near the end just to accelerate the process and cut through some of the redundancy.

I was pretty sure I liked this episode already, but what happens in the last two minutes caused me to love it. There is certainly no risk of the story feeling neatly tied up in a ribbon; instead a major clue is unveiled in a beautifully hazy way that will likely cause those who have been paying attention to the story’s details to immediately seek spoiler-heavy discussions to reconcile their perception of events. This was necessary for me to actually remember a couple details from the first episode, which was nearly nine months ago and is abysmally recapped in the useless opening scene. It is really a great twist and a pleasant surprise of an ending, coming at the point where I assumed credits were about to roll, and with my memories a bit imprecise I actually found myself wanting to go back and play through the series again, something I vowed never to do after the fourth episode. 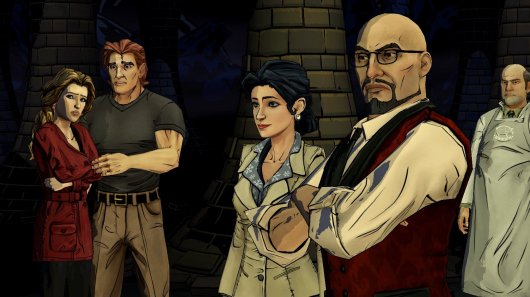 So, here is an opportunity to celebrate The Wolf Among Us for its strengths. It looks great, has incredible graphic style, and features some of the best voice acting and direction in the history of adventure games. Its fight scenes will be referenced for years and it spares no amount of imagination in the best of these sequences. But here is also a chance, particularly for adventure gaming fans, to lament the weaknesses. There’s no puzzling or challenge to speak of, other than that of quick reflexes during fight scenes; there’s often too much dialogue for the obvious purpose of bloating scenes; the music is so minimalist as to really not contribute anything to the flow of the story; and Telltale never lets us turn off the truly awful, profoundly annoying story notifications, which are no longer even content to be bluntly omniscient—someone now thinks it’s a great idea to use these notifications to convey dark humor along with the obnoxious and overstatingly-obvious reminders of the effects your choices have.

Above all those points, however, rises Telltale’s ability to do what they seem intent on doing best: telling a story. And as an entire season, with the two highest points of storytelling being at the beginning and end, the story of Bigby Wolf turned out to be an interesting and worthwhile one. I do not support the idea of continuing this to a second season; doing so would undermine the gravity of the final decisions and would ultimately be too restrictive, as the story would have to take place before the first issue of the Fables comic anyway. But with the entire season in perspective, I enjoyed my time in Fabletown a great deal—if somewhat sporadically—and have appreciated the ride that The Wolf Among Us has taken us on. I’m actually sad it’s over, but I guess we all have to return to the “mundy” world at some point.

WHERE CAN I DOWNLOAD The Wolf Among Us: Episode Five - Cry Wolf

The Wolf Among Us: Episode Five - Cry Wolf is available at:

It’s been a crazy up-and-down season, but the conclusion of The Wolf Among Us is a visceral, stylishly violent adventure in Bill Willingham’s brilliant Fabletown at heart, with some great storytelling aptitude to close things out.

GAME INFO The Wolf Among Us: Episode Five - Cry Wolf is an adventure game by Telltale Games released in 2014 for iPad, Mac, PC, PlayStation 3 and Xbox 360. It has a Stylized art style, presented in Realtime 3D and is played in a Third-Person perspective.

What our readers think of The Wolf Among Us: Episode Five - Cry Wolf

3.5 stars out of 5
Average based on 17 ratings
Your rating