While specific story details are vague (it would hardly be Twin Peaks otherwise), the game invites players to experience "several locations from the show including the Red Room, Glastonbury Grove, Sheriff's Department, Glass Box Observation and more." Combining elements of "the supernatural, adventure and escape room genres," players will be challenged to "solve enigmatic puzzles and explore detailed and authentic environments all within virtual reality for the first time ever."

Created by Collider Games in collaboration with Showtime and David Lynch, the game is being designed to "faithfully recreate" the 3-dimensional Twin Peaks world as a "10-dimensional experience." Not only are specific locations and items taken directly from all three seasons of the show, "original sound effects and sound design from the Twin Peaks series have also been integrated into the experience." Along the way, observant players can discover "many Easter Eggs" that series fans will appreciate. 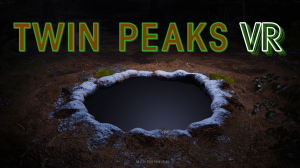