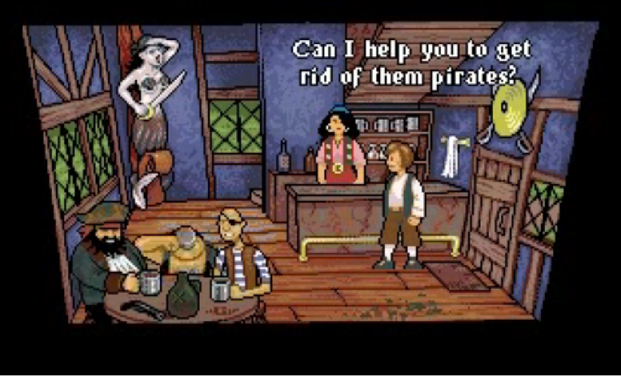 Today’s screenshot is from the episodic indie adventure Tales of Bingwood (2008). It’s a decent game, voiceacting and all. The hero is on a quest: saving a princess from the claws of an evil being.* A truly noble mission. But first he has to run numerous errands for numerous people. At the end of the first episode he’s finally succeeded in finding a way out of his village. Great, now bring on the adventure! But the first episode was also the last one. How I hate that. :angry.  Reminds me of Zelenhgorm, another abandoned episodic game, and a very ambitious one at that. At the end of Episode One the hero has finally managed to leave his village.

*Don’t go looking for dragons in this game, dear fellow quizzers, there are none.

Are there any dragons/dinosaurs in it?
Edit: Oops, serves me right. I never read entire posts before replying.

Great game. I used to play it every New Year. If the planned 5 chapters were all as good as the first one, we would have a game that could match the classic p&c’s. Those Finish bas…!! But, there’s still slim chance for sequels:

“There is still a slim chance of re-making the engine/game for Unity, which would likely mean a tablet version… and a sequel or two. There’s still hope, do remember the first episode was 15 years in the making.

As the game would be developed on a PC, it’s the first choice of platforms as well. Unity is a good engine for any device, as it allows making builds for almost any major platform with a push of a button. We were offering the game to Steam back in 2008 but no luck as that was before the “indie-friendly era”. Nowadays it would be a no-brainer.”

Are there any dragons/dinosaurs in it?
Edit: Oops, serves me right. I never read entire posts before replying.

You want dragons? Here’s one of the “thousands” DarkEye has overlooked.

Just for you, because you so often magnanimously give hints to other people:

One of Darkeye’s beasts is in a AGSotD thread. Piece of cake!

sport, but that’s not one of those I’m looking for.

Speaking of hints, people sure need them in AG scene… I can’t believe it took so long to figure out the galleries of Mr. Casandra (with their characteristic graphics).