The Bizarre Adventures of Woodruff and the Schnibble. Playthrough. (Finished).

-humanity has finally returned to the surface of the Earth after living near the planet’s core for centuries, following a nuclear war,to discover a peaceful race mutant called Boozooks

-The humans and always wicked they are easily overpowered or dominate the world (again) and the enslaved he Boozooks.

-Eventually, Woodruff’s (the baby) father was one of the victims but he has been working on a contraption that he jams onto his son’s head, and hide him.

-Woodruff after these terrible events is transformed into a teenager in a jiffy.

-Woodruff not able to remember anything of what happened as growing up that fast left him with blacked memory.

-who is he? and what has just happened?, And what is the word that keeps echoing in mind, the word “Schnibble”.

The game is one of the top hardest adventures such Riven, Neverhood.

It begins with a restricted location of 4-5 screens but each time you open or get into a new location the game expands! it is so so neat that about the middle the game turns enormous.
There a ‘small’ bit of pixel hunting, but the worst is Woodruff slow movement, it may be a bit faster than Feeble i give it that.
Still a lot of backtracking that kinda i don’t hate.

(Computer Games Magazine) gave it a most notable review, claiming it was “so addictive, you may lose your job”.

There may be a problem is how will we play it,  the game is too unlinear, so each one may do what he can, posting in spoilers tags, or ask a question.

The game has a counter,  played once in 50 hours

P.S: The GM version emulator copies have the best sound.

good luck playing this.  I just finished it about a year ago after having given up when it first came out and I bought it. It is very hard but really fun. The most annoying thing for me was his antics that sometimes seemed like it took forever for him to shrug or something. but, it is worth playing, for sure.

Hi Advie, you posting this initial thread wouldn’t be a problem except that it’s included in a list on another thread open to voting. My thought is that you either delete this thread & wait for the outcome of the voting ....or you keep this thread, don’t mess around with the idea that it’s on hold, & get on with it with the 4 people who’d like to play it & I remove it from the voting thread! What say you?

Thanks, its the style of Sierra old playing making sure you have as save game whenever going into a new area and you are worried that you are going into a trap! made me always suspicious enough not fall into ,ah many times i mean

i anxious to see how logical the game is with a company, or not!

In my mind you should not have been so presumptuous as to have promoted the thread in the 1st place while voting’s going on - why did you?

it coincidence i have been wanting to interduce it to wilco since the start, more than a year ago, look at back the early pages, and he is on hold to a new Sierra, more was to JJ and ecoQuuest but i asked if he would like to change the intent to play woodruff with me, and he said yes, holasss! that’s all!
Doom or Headcakes joining our playthrough, damn well, they are more than welcome.

Advie, you’re obviously free to introduce a game playthrough of anything you like but it needs not to be a candidate for voting in another thread at the same time. I just don’t understand why you didn’t wait until next week during which time Woodruff might have attracted more votes in the Community Playthrough thread but if not, waited until then to post a separate Let’s Play?

How to Play the Bizzare game of Woodruff:

the game has a unique way of how puzzles are the only Trigger that moves the story thru some kinda of Disney land perspective but still on the very natural level of sequences;

-it moves it’s narrative (the puzzles) and (the game) proceeds into the very common sense of sequences, and hardly you can accuse it of being unlawful and end up right. those who are looking for the thing behind that things are those who are stuck.

-beware of the structure of your surroundings, a wall you face is the wall that is at your back on the next screen… ha? thinking of Riven?.. right you are!

-you play the obvious, talk to every interactive person, and do what you do (the possible actions) many times! even with persons as with the items in the surroundings, and the game will let you do it as much as you can or until its over! (many things are resolved with this simple idea of repeating the interactions).

-there is always a very small num of hotspots at each screen! but beware of the pixel (hunt) you might ‘ve missed (but this happens tooo little).

-always show items to interactive-people according to their concern and replies, you may get news or info out of them that may help you! or helps them in the condition they are at.

-Later.. pay attention to the weather broadcast on your Tobozan and to your weather watch, which both you gain early in the game.

Note: i downloaded a new copy than the one i had before, and some miracle had has happened, the copy has subtitles***, i dreamed for subtitles when i was playing it before mostly for not understanding what NPCs say, now its heaven! , wooho!

-I will post a smart game-thru based on all images and places of the game, without much spoiling to the story neither the puzzles…

-If anyone wanna follow my direction of playing it might save a lot of differences in our playing through Woodruff.

The 1st problem with the game is the not enough information and details at the intro, that can make you understand anything!!! of the long past of this new world, earth and breed you will be dealing with ‘il the end of the game.

The introduction i wrote at this start of this thread you won’t even see much of it, its the understanding of someone who played the game many times and gotten to know what it is.
—————- 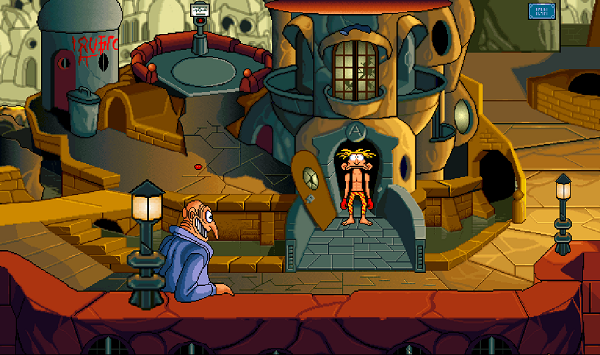 Whoa, stars everywhere, what happened to me. 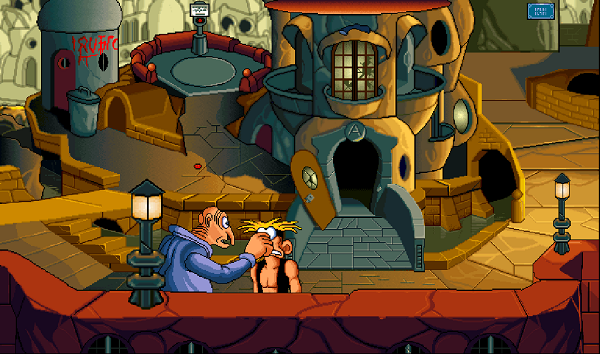 Someone to pick your nose is luxury Woodruff can not afford.
but however, this smirky guy is not bad as he looks, or is he? 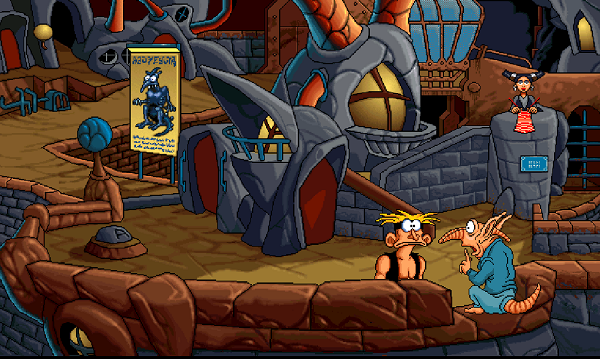 right of the last screen.

The Boozook might be sad, but Woodruff looks too clueless to anything he is saying, in a very funny way. 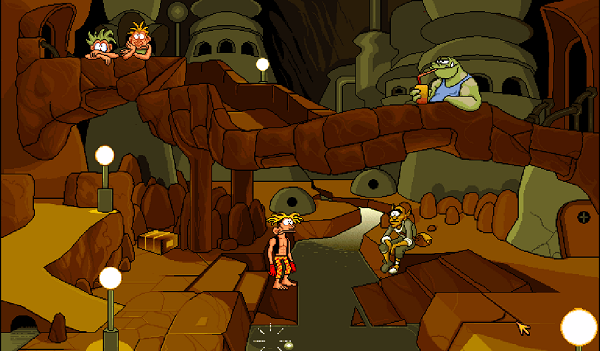 more to the right.

That guy on the other side reminds me of the bad kids at my primary school you i always wanted to beat them up.
i wouldnt know if i can trust them.

This guy is out of service

You were’nt kidding about the weird intro. DIdn’t understand anything of what was going on1
The manual helps a lot

very useful manual, it is almost like copyright manual; without you will spend too much time figuring hard things out.

if you with me wilco, come one, let me hear ye say HoHo