The Bizarre Adventures of Woodruff and the Schnibble. Playthrough. (Finished).

I finished the game now, I will write more thoughts about it later

i am a bit back, outta prison and more .. got the two last syl.
but i ‘ll make my leap tonight and maybe finish it, it’s like only 30% left.

i finally finished Woodruff, all gotta say about this time that i enjoyed the puzzles until the prison part!, but after they like wanted to escalate the puzzle difficulty than it already is. the translation from French is a disaster! and misleading; Tobozon is translated to a telephone? and many other mistakes, i won’t talk about the subtitles as it seems like it made by a fan and went far wrong than the wrongness already from French to English translation.

i talk more later after hearing wilco’s take on the game.

I have the offical, boxed, English Woodruff and there are no subtitles when I play with SCUMMVM. I thought only the original French edition had voices + subtitles, while other languages had dubbing. If I’m wrong, I’d like to know how to get a version with subtitles. 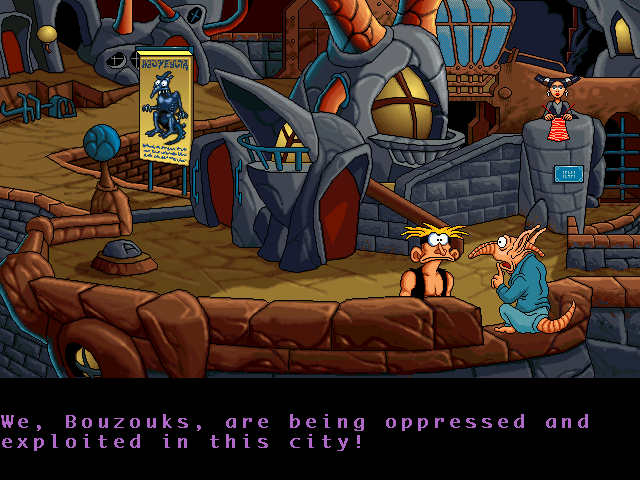 So how do I get subtitles?
Zorba, are you reading this?

My version didn’t have subtitles.

I enjoyed the game for the most part. Liked the scope, part of the puzzles, the world and some of the jokes.
Problems I had with it were the beginning that doesn’t have clear goals and the ending part (like you said Advie), just becomes frustrating. The game peaked around the temple, opening the doors, freeing the council and getting the formulas. After that the use of the powers is so random that without the manual I would just be stuck forever.
Also liked some clever puzzles that used the Tobozon and the weather system.
The game mostly doesn’t have dead-ends (well, except the game bugs…) and no deaths so that eliminates some frustration.

So I think it’s good and worth a go but not quite a classic, I would probably above average in the Sierra games order ff the games I’ve played.

My version didn’t have subtitles.

My offical Woodruff has no subtitles, although I read at the SCUMMVM site that there are indeed inaccessible subtitles on the CD. SCUMMVM didn’t make them appear by magic, apparently it’s hard work. So…

there are two things i have done before starting Woodruff this time and might be the reason behind the appearance for subtitles.

1. i downloaded the latest patch from Sierra Help page http://www.sierrahelp.com/Patches-Updates/Patches-Updates-Games/MiscGamesUpdates.html#WoodruffPAT

Great job wilco, i still need one wise man and i can reach ye.

but the problem staled me i met another bug; the master didn’t appear at the slammer dead end after saving the dying boozok in the past, i search the net for it and found ts a common script error, so i ended up downloading a save game after this master exactly, didn’t effect my progression only that i didnt see the scene where the master teaches Woodruff and the part where i obtain the transportozon, i ll watch it on the tube later, but thank God the save game was savior for me.

Hi everyone. I have arrived here desperated looking for a save game just in that spot. After many hours playing this adventure I have the same problem about master doesn’t appear, and happens so with any save game I have actually.

After 3 hours looking for this save game I have not had luck.

Anyone could help me?

Zorba, are you reading this?

My memories of Woodruff are foggy, but I think the version I played had (English) subtitles. How else would I’ve been able to play the bloody game; it’s difficult enough without having to decipher what the characters are saying.