Surely no one is listing adventure games alongside pasta, the Colosseum, fine wine and art among famous Italian cultural elements just yet, but Adventure Productions is certainly trying to change that perception. The Italian publisher, who doubles as a digital distributor (Zodiac) and triples as a videogame magazine (Adventure’s Planet), has been spearheading a… well, I guess we can’t call it a renaissance, but certainly a growth of genre popularity, both in its home country and now branching out onto the international stage. With two episodes of Shadows on the Vatican under their belt, and other titles like Detective Gallo on the way, they’re doing their best to put Italy on the adventure gaming map. I know, because I’ve worked with them several times on English localization in the past, and I’m doing so again for The Wardrobe, their upcoming collaboration with C.I.N.I.C. Games.

If the name C.I.N.I.C. doesn’t ring a bell, that’s because The Wardrobe is the debut title for the eight-man Italian developer based in the city with the leaning tower. Not that you’d know it from the ambition on display, and the surprising amount of polish evident in their game. While I would never review The Wardrobe for obvious reasons, my direct access to this work-in-progress has given me an extensive first-hand look at the supernatural comedy that is sure to appeal to any fan of traditional point-and-click adventuring, and it’s my pleasure to offer a few early impressions.

The Wardrobe stars a young man named Skinny, whose name really doesn’t do him justice. He’s not just skinny, he’s downright skeletal… because he’s dead. (Who says death in adventure games is a bad thing? It’s not the end, it’s only the beginning!) Adding insult to fatal injury, the means of his demise were particularly humiliating. On a picnic with his good friend Ronald, Skinny gladly accepted an offered plum from his pal, only to discover to his (anaphylactic) shock that he was mortally allergic to the fruit. Over he keeled, and Ronald ran off in a panic, never to speak about the tragedy – or speak at all, ever again.

In the afterlife, rather than taking a deluxe trip through Rubacava and beyond, Skinny awakens to find himself sentenced to live out eternity in the titular coffin-shaped wardrobe belonging to his former buddy. There Skinny watches over Ronald in secret, his trusty sweatshirt the only thing covering his newly-bony bod. (Talk about your skeletons in the closet!) But the stakes are raised when it’s revealed that Ronald’s soul will be damned forever if he doesn’t confess his involvement in his friend’s death. Skinny must now reveal himself and convince Ronald to open up, knowing he wasn’t to blame. Just one problem: Ronald’s family is about to move, and that ugly old wardrobe is headed straight for the dump. Skinny can leave the enclosure, but not venture too far from it, so he’s going to have his work cut out for him. Think of it like A Christmas Carol from the perspective of Jacob Marley, only with cartoon graphics, way more laughs, oodles of inventory puzzles, and a story where everything that can go wrong, does. 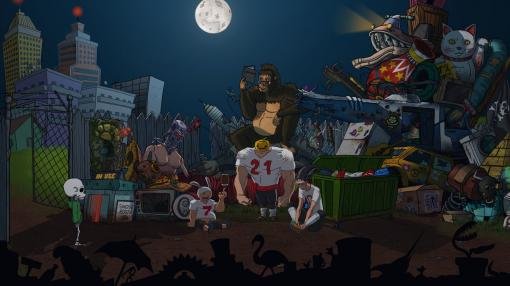 If you think a Dickens reference out of the blue seems random, you ain’t seen nuthin’ yet. The Wardrobe is absolutely stuffed with pop culture nods. Everything from Spider-Man to the Slender Man, from Ghostbusters (original version) to Area 51, and that’s just in the first few scenes I played! In any given room you’ll find multiple gags, both subtle and blatant. And what isn’t depicted in the numerous visual cues is riffed-on in the fully-voiced dialogue. Really you could make an entire game out of spot-the-reference and probably end up with a tally in the hundreds. Obviously that includes many adventure game allusions, whether it’s the gnarly purple octopus tentacles in the refrigerator or the swinging pirate on the ceiling fan.

Whatever isn’t a play on pop culture is just plain nutso. The Wardrobe clearly has a throw-everything-at-the-wall-and-see-what-sticks philosophy. Not everything works, of course, and anything you don’t recognize may go flying over your head, but I was continually amazed at the sheer bombardment of amusing little oddities on display, whether the giant piranha plant, a passed-out-drunken Pinhead, or a gum-chewing moai statue. (Wait, those are references too; you can’t escape them!) You’ll want to take a moment with each new environment to simply soak it all in, and appreciate the crisp cartoon graphics while you’re at it. This is a game that would look right at home on a Saturday morning cartoon, though it’s really not for kids. The script is rarely (if ever) crude or crass, but it pokes fun at everything and anything, and it’s anything but politically correct at times, so you’ll need to check your most fragile sensibilities at the door. 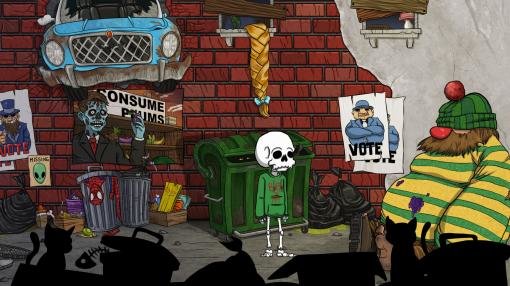 While some games break the fourth wall on occasion, The Wardrobe kicks it down completely. There is a fair bit of player interaction in the game, and right-clicking on each hotspot calls up several available action icons, many of which have their own unique responses. Skinny is a smart aleck of the first order, so expect to be berated sarcastically for any gesture he deems foolish. (Which, if you’re an adventure gamer, probably means you’ll frequently perform on purpose just to see what happens.) Overall I wouldn’t call The Wardrobe thigh-slappingly funny, but it’s goofy and charming and tries so hard that it’ll keep a cheesy grin on your face in between the lighthearted groans and good-natured eye-rolls.

Thankfully, with so much commentary from the protagonist, the actor chosen to play Skinny nails the role perfectly. Having read the script first, I was nervous about the casting, as so many games go for overacted silliness from offbeat characters. But my fears were immediately allayed as soon as I heard Skinny, who largely plays it straight with just enough edge to give him the appropriate bite. The music, too, is impressive, offering a variety of jaunty, jazzy tunes with a touch of the macabre where necessary. 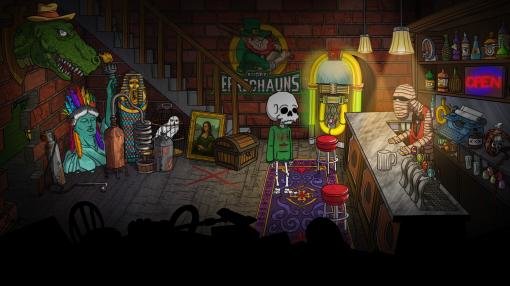 For those who lament the dearth of meaty exploration and challenging puzzles, The Wardrobe will come as a pleasant surprise as well. Fortunately it’s Halloween, allowing Skinny to roam about freely in his “skeleton costume”, and you’ll collect plenty of items to deposit (literally) inside your rib cage for later use. Though locations start out confined, they soon open up and increase the interactive possibilities exponentially. With so many options, you won’t easily be able to brute-force your way through these puzzles, so you’ll need to do plenty of lateral thinking to succeed. Given the screwball nature of the game, some of the puzzle solutions are zany as well. None are unfair, at least in my experience, but there are a few head-scratchers that will only be solved by due diligence and leaps of logic. I’d read all the dialogues beforehand, and I still needed help a few times! (Although working on a deadline, I didn’t have time to thoroughly noodle around – at least, that’s my story and I’m sticking with it.)

While not exactly an endangered species just yet, the traditional third-person, point-and-click adventure hasn’t been as prominent in recent times, so The Wardrobe should be right up a lot of genre fans’ alleys. Between the high-quality presentation, substantial puzzles and rich player interaction, plus more comic pop culture references than you can shake a fibula at, there will be plenty to keep you occupied and entertained throughout. I haven’t played the full, complete version of the game, only the first two of three still-unfinished chapters, but I saw plenty of potential and look forward to seeing how it all turned out. And we don’t have long to wait, as The Wardrobe is currently undergoing the final stage of polish in advance of its scheduled release on February 15th. 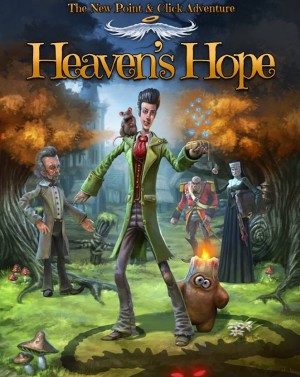 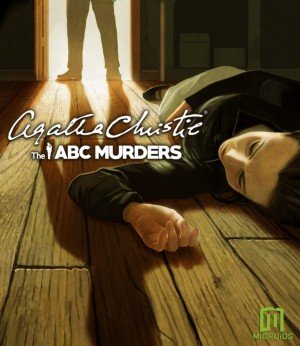