Escape-the-room games are a niche sub-genre of adventures, generally being puzzle-driven affairs with little-to-no narrative and taking place within a single scene. Typically, the goal is to solve the puzzles found in the given location and unlock the exit, thus ending the game. The popularity of mobile and touch-enabled computing has contributed to an explosion of these games, varying hugely in quality.

A Short Tale, by UK-based indie Glitch Games, is one such title, and for gamers desiring a modest puzzle-centric experience, it is both challenging and nicely polished. While it sticks closely to genre conventions, a few unusual features like a whimsical setting and puzzles inspired by familiar childhood toys make it stand out from the crowd. Unfortunately, the initially promising story framework never becomes much more than justification for the protagonist’s short stature. While this is a missed chance to create a richer narrative and better-rounded adventure, it doesn’t significantly hinder the overall experience, and the result is still an enjoyable game that gives puzzle lovers a few hours of solid entertainment.

A brief storybook sequence at the beginning of the game provides the context for the game’s knee-high, first-person perspective. Players take on the role of Jason, who lost his brother Ben five years ago. Jason feels responsible for the tragedy, and has returned to the bedroom he and his brother shared to try to come to terms with his loss. Overcome with emotion, he makes a wish that he were small again, then curls up and goes to sleep. Upon waking, he finds that instead of becoming small in the sense of returning to his younger, happier years, he has literally shrunk down to a size barely larger than the toys in his room. Desks that were previously waist-high are now towering obstacles, and, crucially, the doorknob is now impossible to reach, thus trapping Jason inside the room. 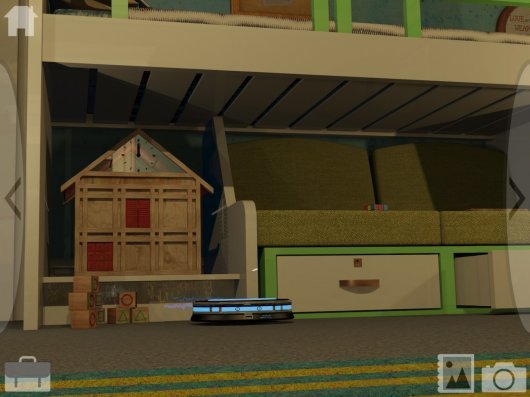 Given the heartstring-tugging setup, I expected some commentary from the protagonist about the toys he sees, in order to provide an emotional connection to his past and help us understand the history between him and his brother. But save for a few brief examples, this never really happens. The most powerful emotions I experienced stemmed from my own nostalgia for the toys and games of my youth as I encountered familiar sights around the room. The omission made it hard to connect with the protagonist or his situation, and instead I felt fairly detached from the game’s tragic backstory. This clearly wasn’t a priority for such a puzzle-centric game, but the meticulously-crafted setting in A Short Tale is ripe for worldbuilding, and the lack of story feels like a lost (and frankly, obvious) opportunity.

Providing some flavor are several toys that have come to life, including a Magic 8-Ball, an alien whose two children have gone missing, and a talking robot that once belonged to Ben named Captain In-Ya’-Face. In order to enlist their help in your escape, you have to perform tasks for them, such as recovering the alien’s offspring, rearranging the Magic 8-Ball’s DVD collection, and dressing Captain In-Ya’-Face as his favorite hero. These goals are puzzles in their own right, but often require other puzzles to be solved first in order to gain access to the necessary supplies needed to complete the objective. Each toy has its own personality, such as the Magic 8-Ball’s grumpiness or Captain In-Ya’-Face’s habit of spouting movie and TV show-related one liners. While this doesn’t overcome the lack of narrative depth, it does contribute to the whimsical nature of the game.

The puzzles are the main focus of A Short Tale, and thankfully the game is chock full of inventive and very fun challenges to keep players busy. Both logic puzzles and inventory obstacles are represented, and while many share basic similarities to puzzles in other titles, the game breathes new life into them by generally letting the playful setting guide the puzzle design. For instance, a toy piano is used for several logic puzzles, including unlocking a safe and controlling a voice-activated television, and a Perfection-like game doubles as a combination lock that is solved when you find all the pieces hidden around the room to place back in the game board. There are numerous other examples of repurposing familiar toys and games as puzzles, such as a Simon-like electronic game that provides a clue when solved, and using riddles to open a Scrabble board safe, among others. 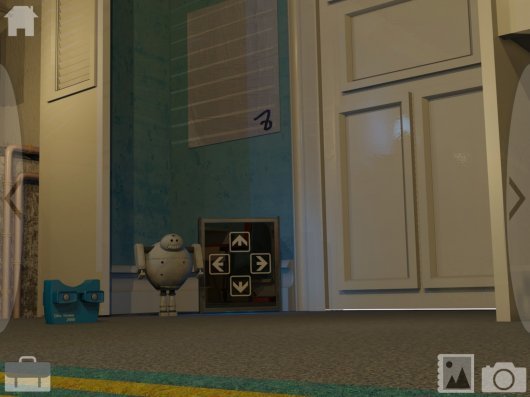 The level of challenge posed varies from fairly easy to quite hard, and there were a few times that I needed to consult a walkthrough in order to either solve a puzzle or simply learn what to do next. The latter issue is due mainly to the lack of a hotspot marker. What parts of a scene are interactive is not always obvious, and sometimes there is a hidden area in the current scene that you are meant to find, such as a cubby-hole that is partially obscured. While this sort of issue is a fairly common mechanic in escape-the-room games and it isn’t overdone here, I still found it frustrating at times.

A Short Tale is played in first-person perspective, and the point-and-click interface will be instantly familiar to anyone who’s played a slideshow-style game before. There is no tutorial available but it isn’t particularly needed, even for inexperienced players. I played the PC version using a mouse, but the directional arrows at the side, top and bottom of the screen used for navigation and the large corner buttons used to access inventory, screenshots, and the main menu are obviously optimized for touch screens, and thus are fairly simple to understand. The screenshot feature is particularly helpful, as it preempts the need to write clues down for later reference.

For a game that takes place in a single room, there is a surprising amount of variety in the areas you can visit. Part of the fun is how your small size tends to distort the environment, turning ordinary things like a desk or bunk-bed into obstacles that require jury-rigging a solution to overcome. You can expect to climb up electric cords and across bridges made of rulers, explore closets and crawl through air ducts as you complete puzzles and perform tasks. It is also interesting to see how normal objects like hammers and electronic tablets have to either be worked around or utilized in unusual ways because they are impossible to carry with you. 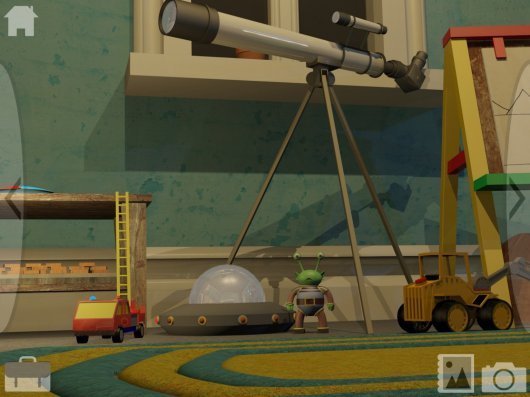 The graphics fit with the overall child-like theme of A Short Tale, sitting somewhere between cartoony and realistic. Splashes of color on toys, clothes, and games contrast with the more muted tones of the room itself. There’s not much that can be considered “animation” here, with events like pressing a button or opening a cabinet simply changing the view from one position to another with no transition. The few cutscenes are likewise a series of still images that play in sequence, done in the same style as the rest of the graphics. Although there isn’t anything particularly noteworthy about the visual presentation, it does the job it was meant to do without being a distraction.

Sound effects such as clicking buttons, interacting with games and toys, and entering codes into combination locks are all realistic. There are a few voice-overs, such as the alien family and Captain In-Ya’-Face, but these are brief and the lines for the Captain appear to have been provided by a common voice synthesizer. The music tends toward a downtempo texture, and surprisingly there are a variety of tracks provided, changing appropriately as you make your way around the room. Piano and orchestral tunes make up the majority of pieces, though marimba, xylophone and guitar-based tracks are also present. Unfortunately, I found the repeating tracks distracting after a while, so I eventually turned it off. This is a shame, because Richard Moir’s score is actually very enjoyable to listen to by itself, and often fits in well thematically.

Coming in at just over five hours in length, A Short Tale is anything but short for a room escape game, and pretty much all of that time is spent tackling puzzles and exploring the many nooks and crannies offered by the boys’ surreally-oversized bedroom. Although I’m not that fond of games that neglect story in favor of a barrage of puzzles, the charming setting and quality of the puzzles made my experience here a very enjoyable one. The use of classic toys and games in the puzzle design also feels innovative, and keeps the experience fresh. There are some major narrative gaps, especially in failing to capitalize on its own tragic backstory and the lack of exploration of the brothers' relationship, but overall this game is worth a close look by anyone wanting a solid puzzling experience in an unusual, nostalgia-tinged environment.

Although it wastes most of its narrative potential, for anyone who just wants to play a game chock-full of fun and unusual puzzles while exploring a charming and nostalgia-inducing environment, A Short Tale provides plenty of entertainment for a few hours.

GAME INFO A Short Tale is an adventure game by Glitch Games released in 2016 for Android, iPad, Mac and PC. It has a Illustrated realism style, presented in Slideshow and is played in a First-Person perspective.

What our readers think of A Short Tale