Tales From Off-Peak City: Vol. 1 destined for Steam next month

Pandemic lockdowns aside, how hard can it be to acquire a simple musical instrument? Well, according to Cosmo D and the debut installment of his new standalone anthology series, Tales From Off-Peak City, the answer is: very. But also very "weird and wonderful," in the indie developer's typically surreal, "jazz-infused" way.

The premise of Volume 1: Caetano's Slice is simple, as players visit the "unforgettable street corner of July Avenue and Yam Street" and attempt to "obtain a saxophone from longtime pizza-maker (and former saxophonist) Caetano Grosso." It's a "hazy Sunday morning" and as business begins to pick up, Caetano "needs someone to help with the deliveries." You agree to assist, not out of kindness but determined to seize the opportunity to obtain the coveted sax "one way or another." Little do you suspect that "your pursuit will set off a chain of events across the neighborhood, taking you deep into the hidden worlds and private lives of the people living there."

Set in the same world as the developer's freeware game Off-Peak and its commercial follow-up The Norwood Suite, Tales From Off-Peak City is described as a "first-person adventure game series, all set on, around, and under a single street corner." Though inspired by the Big Apple, the environments here represent a surreal interpretation of New York City filled with curved lines, unusual architecture, and equally unusual inhabitants. As you begin to delve deeper into the "spaces they inhabit, the game provides an open-ended world full of secrets and hidden agendas." Along with traditional adventure-style gameplay such as "a certain degree of exploration, some light environmental puzzling, talking to characters, an inventory system, and layers of narrative for the player to uncover," you will engage in a variety of story-related activities, so expect to "make pizzas, take photos, push buttons, open drawers [you're] not supposed to, and lose [yourself] inside the atmospheric musical score that integrates itself directly into the game world."

Originally launched in February as part of the Humble Choice subscription service, Tales From Off-Peak City: Volume 1 – Caetano's Slice is now heading for Steam on May 15th for Windows, Mac and Linux. Future installments will tell their own discrete stories, though when "taken together, they build towards the larger over-arching narrative of what's really going on at the corner of July Avenue and Yam Street and what role you ultimately play in its fate." 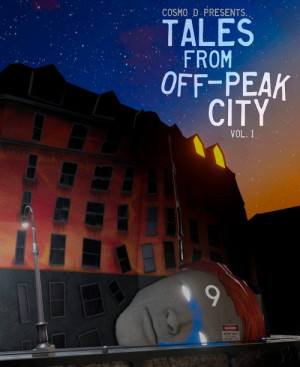