Oz Orwell and the Exorcist materializes on PC

It's been several years since we last heard from Oz Orwell, the fraudulent ghost-hunter who found more than he bargained for when venturing into Angst Mansion back in 2012. But ever since The Crawling Chaos... nothing, both for Oz and for gamers. All that changes today, however, with the PC release of Oz Orwell and the Exorcist.

Life hasn't been good to Oz since his one genuine supernatural encounter (which he couldn't even manage to document on film). His website, Ghosts & Mansions, is doing badly, no one trusts him anymore, and he'll soon be forced to face his worst fear: finding a real job. But Oz has one more idea to salvage his reputation and his career. A new paranormal expert has recently emerged on the scene, achieving wealth and fame and success while Oz has found only failure. Calling himself "The Exorcist" (although neither a priest nor a religious believer at all), he lives in an "abandoned, crumbling building, a former mental asylum in the English countryside" that is supposedly haunted by ghosts. Oz believes that a documentary about The Exorcist in his own home will catapult him back into the spotlight, and much to his surprise, the Exorcist agrees to his request for a visit.

Like its predecessor, Oz Orwell and the Exorcist is a third-person point-and-click adventure, although unlike the first game, the sequel is predominantly (and perhaps entirely) in black-and-white. Players will once again control the titular protagonist in an adventure that promises "a carnival of horror clichés: an exorcist, an abandoned mental asylum, ghosts for company and a self-styled paranormal investigator looking for a scoop."

Developed in Italy by Midian Design, creator of numerous other indie adventures including Quantumnauts, The Apotheosis Project and Doc Apocalypse, Oz Orwell and the Exorcist is available exclusively for PC download on itch.io. 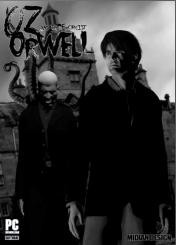