In 2009, the semi-interactive webcomic Homestuck was launched, a kind of "mock adventure game" combining a story about teenagers who become trapped inside the world of a video game with a comedic parody of the genre. It went on to gain a cult following of fans, bolstered by community involvement in the comic's direction. In 2012, creator Andrew Hussie took to Kickstarter to raise funding for a proper video game set in the Homestuck universe, garnering nearly $2.5 million dollars by campaign's end.

Three years later, Hussie's What Pumpkin Studios has announced that the first episode of the planned four-part game, titled Hiveswap, is nearly ready. The plot revolves around Joey, a young girl who gets sucked through a portal and trapped on Alternia, an alien planet. In Joey's quest to return home, she will join a group of "troll rebels," discover the "true meaning of friendship," and somehow save the world in the process. Although set in the same universe as Homestuck and loosely based on existing canon, the game's story is completely standalone and intended to be accessible to series newcomers, though references to the webcomic peppered throughout should satisfy diehard fans as well. As seen in the first screenshots released, the point-and-click adventure will be played from a third-person perspective, with stylized 3D animated graphics providing a whimsical view of the proceedings. The developers promise that, despite its origin in parody, players will have honest-to-goodness puzzling gameplay and a variety of adventuring tasks to perform.

Hiveswap is scheduled to arrive this spring, with the other three episodes set to follow throughout the year on PC, Mac, and Linux platforms. For more information, head for the game's official website. 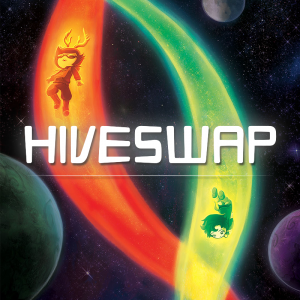