It's been a while since we've heard much about Memento Mori 2: Guardian of Immortality, but the newest trailer for Centauri Production's upcoming sequel gives us the chance to be a fly on the wall, so to speak.

Original stars Max and Lara return as newlyweds this time around, but their honeymoon is short-lived when they're contacted about a museum art heist in Cape Town. Following a high-speed chase, Max and the thief are involved in a perilous cliffside accident, and only the thief's body is recovered. With her husband missing and presumed dead, Lara returns to her Interpol office in Lyon, but clues discovered in her next case suggest that Max may not be dead after all.

The musical trailer represents the game's introductory cinematic, so rather than offer any detailed peeks into the story, it instead establishes the dark, ominous tone of the game, with a quick glimpse of the nightmarish fate that awaits Max.

Production on Memento Mori 2 is nearing completion as it approaches its German launch, though there's still no concrete word on when we might see the English version released. 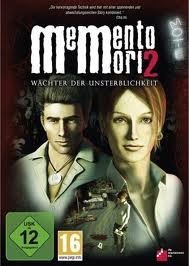