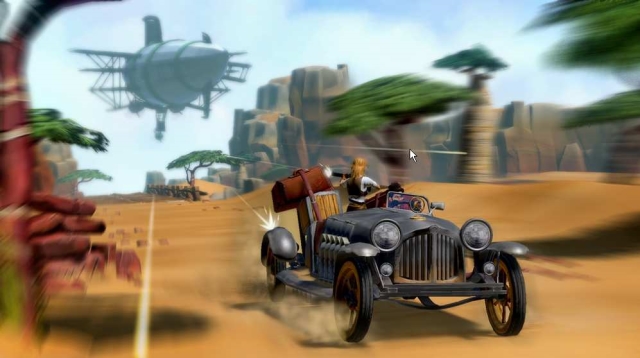 Welcome to the ninth adventure game challenge where we will be playing the game Jack Keane 2: The Fire Within.

There is as usual a time-limit to when you have to complete the game, and because it is Easter I have added a couple of extra days to the norm, so you have exactly 10 days until Friday the 1st of April. And as usual, first to finish it get to set the next challenge.

Jack Keane 2: The Fire Within is the sequel to the very successful first Jack Keane game, and has much of the same charm and quality as the first game. I am however also the first to admit that it is not a perfect game, and it has its share of flaws. I hope that you will be able to look past these flaws and see the qualities that the game also has.

Despite being a sequel, then it is also an independent story, and it isn’t a requirement that you have played the first game.

So lets have some fun, and I hope that many of you will give this game a fair chance.

On to it. Never played the first one. I know it has a bad rep, (in the gog forums there is a joke about it, because is constantly on those timed sales…) but should be a different time of game.

yes it is indeed much maligned at gog

I probably wont be playing but i’ll be interested to see the reactions here.

Personally I thought Jack Keane 1 was terribly boring game. As its main focus is humour, its grip depends quite a bit if the player finds it funny. I didn’t. I’m not sure how far I got in it before I called it quits, but I never did finish it.

So on that ground, I won’t be playing JK2 (said he with a pompous tone of announcement in his voice).

Unfortuntely my German is not good enough to try this myself, otherwise I would have done so.

I’m sorry to learn that you are so ill Iznogood & hope you get well soon!

As the next part of Touche has been delayed & I discovered that JK2 is one of the games I bought from GoG VERY cheap early last year I did play for a few hours yesterday but not sure I will finish it in the time-frame!

I got as far as both Amanda & Jack arriving in Hamburg I liked the game graphically up until that point finding some of the cinematic quite stunning for an AG & didn’t mind the portrayals of the characters until in Hamburg Jack shaved off his beard & found the actual rendition of him quite ugly as opposed to the way he was portrayed in JK 1.

I found the interface not so awkward but it was P&C with the opportunity to use WASD keys if you wanted (I haven’t so far).

The game was interesting enough with the ‘action’ scenes being a P&C affair & the puzzle element being engaging enough & quite challenging with some bizarre inventory use (well, for me it was!) I also liked the humour but as for the story which for me should be the strongest part it just hasn’t grabbed me so much with the engagement being more down to other elements already mentioned! One of the story aspects that has left me cold so far are Jack’s dream/subconscious scenes which I didn’t enjoy so much & don’t quite get?

Unfortuntely my German is not good enough to try this myself, otherwise I would have done so.

Oh, sorry to hear that. Hope you get well soon!

I’ll see if it’s possible to get only the voices in German but with English subtitles (seems like it might be) and if so I’ll write out the steps on how to do that in English.

I forgot to mention that I didn’t mind most of the English voice-acting but not that for Jack himself so I’m guessing he sounds lot better in German?

I really enjoyed Jack Keane 1 but I found Jack Keane 2 only blah.  I didn’t really enjoy that puzzles and the controls were quite awkward.  But, at the same time, I didn’t totally hate it so I’m sure you all will enjoy it!

Get well, iznogood! Jack Keane will be waiting.

get well Izno!
if playing JK2 and even finishing it in one day (aww!) would help ya, just ask, I can do that

I played the first part so far, until the end of the dream.
It’s better than I thought it would be so far.
I like the engine, 3D environments look nice and lively, the controls allow for some exploration and the direct control with jump makes it different. I use the WASD controls to movement (using the mouse felt awkward). The only problem I’m having is that o lot of times when I click the left mouse button for interaction it doesn’t work at firt or second try. That’s annoying.
Nice to see some insult swordfighting, even if it’s very simple so far.
The story doesn’t make much sense so far but I liked the dream. Puzzles were ok, nothing very original, on the easy side but took me a bit to figure out how to distract the guard to get the book.

Thanks everybody, I’m now back from the hospital, though I have to return for some extra tests after Easter (and possibly some minor hearth surgery at a later date).

One of the story aspects that has left me cold so far are Jack’s dream/subconscious scenes which I didn’t enjoy so much & don’t quite get?

As I remember it, these sequences was actually my favourite part of the game, though I also can’t remember what it is all about. But I will probably remember more once I get started with the game later today.

Welcome back Iznogood! Hope your tests will be ok!

So, for anyone who wants to play with German voice, here are the steps:
- Download the file from http://www.schote.biz/sprachdateien-deutschpatches/12-jack-keane-und-das-auge-des-schicksals/1303-deutsche-stimmen-sprachausgabe.html
- Extract that rar file, you’ll find an audio directory within it.
- Inside that audio directory, copy “speech-german.fsb”  to “C:\Program Files (x86)\Steam\steamapps\common\Jack Keane 2\audio”
- Edit “C:\Program Files (x86)\Steam\steamapps\common\Jack Keane 2\settings.ini” and change “game_language_voice   =  english” to “game_language_voice = german”
- Edit Documents\Jack Keane and The Fire Within\settings.ini and do the same

Later on anytime you want to switch back to English voices, just change game_language_voice in settings.ini. It’s possible to change the voice mid game, so not a problem if you’ve already started playing.

Also, if anyone had issue with the cursor not moving in the menu, you need to make sure you don’t have a custom DPI (custom scaling) in Display Settings. I’m playing on Parallels on a macbook retina and so ran into that issue.

I’ve reached Hamburg. Had severe slowdown issues in the Amanda part of the prison sequence, specially in the showers. Hope there don’t show up again.
Thanks for the tips giom