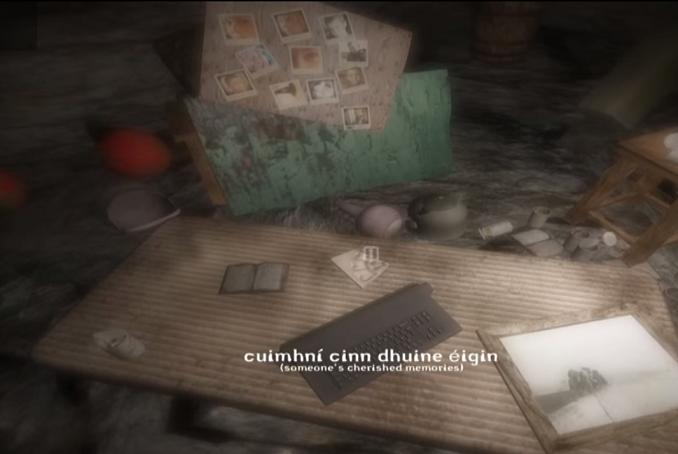 The intro of the first episode of 1st-person adventure Montague’s Mount (2013) reminded me strongly of Dear Esther: man alone on island, limping(!), talking to himself every now and then, exloring dark, foreboding surroundings, uncovering secrets. But the comparison ends there. I lost interest after a while: lots of backtracking to locate items, hardly visible hotspots, repetitive puzzles, not enough story. I won’t be buying the next episode, if there is going to be one.

I chose a screenshot inside a cave because outside it’s hard to make out anything in the very dark and grey world outside. Two things I really liked: You can see your own shadow when the light is behind you. And the descriptions are in Irish Gaelic, a language that always had a magic quality for me in writing. Just look at those beautiful words!*

*It lost some of its magic when I bought a book about Gaelic and learned the rationale behind the mysterious spelling. Fortunately, the magic then shifted to the pronunciation.

I bought the game very cheap in a GoG sale mistaking it for another game so I was interested in your thoughts on it Karlok. On reading them I may get around to installing it sometime in the future but there’s now no hurry!

As for Gaelic pronunciation I came across a colleague in my working life with a name spelt Niamh (or something like that) which I presumed to be pronounced ‘Niam’ (like the male name Liam)... but no! it was pronounced as “Neeve” - HUH! Also the name Siobhan which I always assumed to be pronounced as ‘See-o-ban’ I discovered years later was actually pronounced as “Shivorn” ....so I conclude that Gaelic is a great language to use as a basis for difficult unfathomable puzzles in adventure games!

I love Irish names. Wouldn’t it be great to be called Aoibheann.

See here for the pronunciation.

The reason that the Irish couldn’t fit their rich language in the straightjacket of the Roman alphabet is that every consonant can be pronounced either slender (velar) or broad (palatal). So they use combinations of letters (like bh and le) to indicate whether a consonant is slender or broad. The words lón (lunch) and leon (lion) are distinguished in sound only by the kind of l.

Wouldn’t it be great to be called Aoibheann?

Not in the old days of postcards. There wouldn’t be a living soul to figure out how to write that one.
Pronouncing it would be fun, though. I-owe-bean(s)? Yippee-yay-oh!